Indonesia: At the Top in Gains of GDP and Military Spending

Throughout the period observed, Indonesia remained in 17th place of the BPSM-Power-Ranking with an overall Power Score of 1.09. Considering the Power Shift Rate, Indonesia comes in 7th, showing a negative Percentage Power Score development of less than one percent (-0.008). This signifies that – compared to the average Percentage Power Score of the G19 states – the country showed a decent development between 2016 and 2020. Surprisingly, Indonesia, generally considered as an emerging country, holds the greatest decrease in terms of Country Change (-2.55). This is mainly due to losses in the country’s hard power sectors, to name: Companies, Exports of Goods and Services as well as Total Reserves. 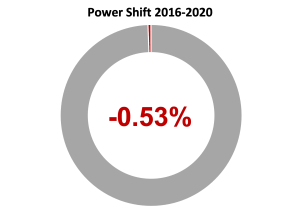 Turning to the indicators, Indonesia claims a significant increase of more than 20% in terms of GDP (PPP), leading to a gain in Country Share in this sector. On the whole, Indonesia showed the second-best development in terms of GDP, only exceeded by China. With regard to the indicator of Exports, Indonesia slightly managed to increase its export volume, which resulted in a stagnating Country Share of 0.80% percent. In total, Indonesia turned out as the country with the third lowest number of exports of the G19 member states in 2020. Turning to the indicator of Top Companies, Indonesia continues to struggle, losing the one and only company listed in the Fortune 500 over the course of the observed period.

While Indonesia claimed a small increase in terms of its Total Reserves, it lost in Country Share in this sector (from 0.94% in 2016 to 0.89% 2020) due to a better average performance of the other G19 states. On the whole, Indonesia now ranks 14th in this category. With regard to the indicator of Military Spending, Indonesia claimed a significant increase of almost 24% throughout the course of the obersved period, which led to a slight increase in terms of Country Share (from 0.44% to 0.49%). However, all in all, the country still ranks 16th in this category, recording one of the lowest Military Spending of all the G19 countries.

Indonesia’s control of four Chokepoints grants the country the shared 9th place in the sector of Chokepoints. Considering the indicator of UNESCO World Heritage Sites, Indonesia only gained one new site – the Ombilin Coal Mining Heritage of Sawahlunto – getting tied for last. In total, Indonesia holds the second lowest amount of UNESCO World Heritages. At last, turning to the indicator of Top Universities, Indonesia still does not register a Top 200 University. As a result, no change can be pointed out regarding this category.

To put it into a nutshell, Indonesia’s main Pillars of Success and Global Power can be traced back to the country’s GDP and control of chokepoints. Moreover, the country recorded the biggest gains with regard to the sectors of GDP and Military Spending. 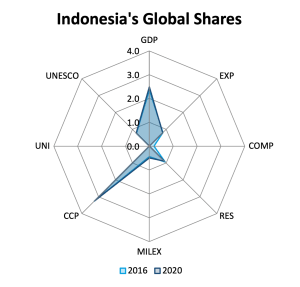