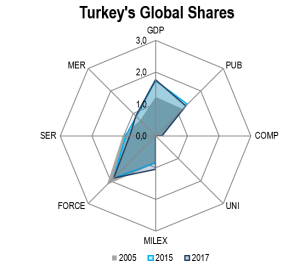 Since 2015, Turkey has stagnated in relative power terms with a Power Shift Rate (PSR) of zero, although it recorded slight gains in absolute terms in the BPSM categories between 2015 and 2017 (Rate of Country Change +4.89). Together with South Africa, Turkey is thus the only G20 country that has not experienced any substantial gain or loss in power over the 2015/17-period. 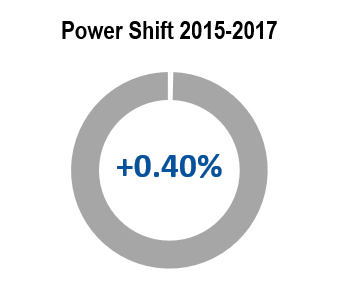 Turkey´s country shares remained stable among the categories of top companies (0.20), armed forces personnel (1.87) and top universities (0.00). These relative results also correspond to the absolute numbers, since the Indicator Change Rate (ICR) is zero in all three categories.
Comparing the numbers of 2015 and 2017, light profits were recorded in GDP (PPP) with an increase in Turkey’s global share from 1.73 to 1.76 percent and in merchandise exports with an in-crease from 0.86 to 0.88 percent. This progress is synchronous to the development of absolute values since the GDP increased by 12.36 percent and merchandise exports by 9.15 percent. 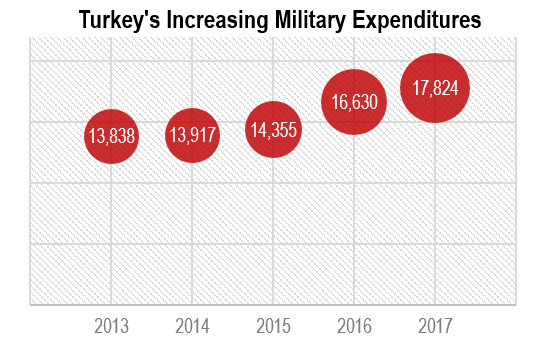 Interestingly, the country shares in military expenditures rose sharply from 0.86 to 1.05 percent. This development can be attributed to a 24.17 percent increase in military spending within these two years. These numbers are even more remarkable if one considers that military expenditures increased by only 20 percent between 2005 and 2015. Therefore, the BPSM records a strong hard power buildup that may be related to the attempted coup d’état in 2016.
The BPSM records a slump in scientific publication numbers in 2016, when Turkey’s shares fell from 1.45 to 1.34 percent in 2017. A similar drop can be observed in Turkey’s absolute publication numbers, which marks the greatest decrease over the whole observation period between 2005 and 2017. Even greater losses occurred in the area of service exports, where the country shares dropped from 1.0 in 2014 to 0.75 percent in 2016. Having said that, Turkey’s share recuperated to 0.81 percent in 2017 – a development likewise observable in absolute figures which did, however, not level off its previous losses.
To sum up, Turkey’s figures are overall stagnating, whereas its small profits are offset by the losses. As long as the country does not make up for its deficits, particularly in the structural cat-egories of universities and Fortune 500 companies, the stagnation will continue at best or, more probable, if other countries such as Mexico continue to prosper, Turkey´s global power share will even shrink.

Being the interface between Europe and Asia, Turkey enjoys great geostrategic importance giving it unique leverage in transcontinental affairs. Thus, international attention in power politics is regularly paid on this bridging country raising the question of its actual power capacities apart from its power of location. According to BPSM measures, Turkey has only slightly gained weight with a 5.5 percent enlargement of its power base since 2005. Turkey is the first country on the individual G20 states list presenting a positive Power Shift Rate of +0.5, but this marginal plus indicates rather a stagnating than rising tendency of Turkish power over the period under review.

Its country change rate (CC +48.26) is also the weakest of all risers, while it is significantly higher than the corresponding development sum of power losers. As the Turkish progress does yet not exceed the global average, its power base barely expands. This should, however, not lead to an undervaluation of its actual influence in international, particularly regional affairs, as the BPSM reveals that it has still a special edge in some categories.

Among the G20, Turkey was outranked by Mexico and Saudi Arabia over the research period. Presenting a Power Score of 0.94 in 2005, Turkey was ahead of Mexico (0.88) and on par with Saudi Arabia. Yet in 2011, the desert Kingdom boosted its capacities, leaving behind the Turkish power level. In detail, Saudi Arabia presents a 2015 Power Score of 1.27, whereas Turkey trails behind with a score of 0.99. On the other side, Mexico needed more effort to best Turkey. While Turkey presents a positive tendency, the Mexican rates fluctuated over the years. As it returned to a growth path in 2010, Mexico managed to surpass the transcontinental state in the 2015-ranking boasting a Power Score of 1.01. The breakdown of the Monitor demonstrates that each country has distinct assets, while contrasting Turkey with these risers stresses its sluggish rise and advises a nuanced appraisal when speaking about its clout.

The positive leaning of the Republic’s Power Score is mainly owed to its economic rise, whereas it is largely offset by downscaled armed forces. In the BPSM, gains in GDP are in fact the strongest plus in Turkey’s rating (MC +0.40 percent). It has more than doubled over the examined years and lifted the Republic by two ranks to the 13th largest economy among the G20 states. Totaling $1.882 billion, it surpassed the Saudi Arabian market in 2010 and even the South Korean in 2013 – though both rank higher in aggregated Power Scores. Then again, it lags behind the level of Mexico all the while.

In absolute figures, virtually all countries experienced a drop in 2009 due to the global financial crisis – Ankara presenting no exception. Nevertheless, Turkey’s economy did not only recuperate thereafter, but even accelerated its rise and showed higher growth than the aforementioned Saudi Arabia and South Korea. While other measures find a slowdown of Turkish economic growth, its upward trend in purchasing power parity points to a progressing domestic market and rising wealth.

Its fast industrialization also enlarged its competitiveness in commodity trade. Over the research period, Turkey has almost doubled its external commodity trade translating into a plus in global market shares (MER: MC +0.17; ICR +95.76). Among the individual G20 states, however, Ankara ranks only 17 out of 19, only in front of South Africa and Argentina. Despite greater trade, it did not reach the export rate of 16th ranked Indonesia. This is also due to its curbed dynamic as Turkey’s rising export trend since 2009 came to a halt in 2012 and even dropped in 2015. Yet many countries that exported natural resources, particularly oil, experienced drops in their revenues. To illustrate, Saudi Arabian exports have dropped by around 50 percent between 2012 and 2015. The lower setback for Turkey is partly owed to a more diversified export portfolio ranging from cars to machinery, gold and jewelry.

The waning economic dynamism is reflected in the service exports category. Despite rising service exports until 2014, the global count of Turkish offers hardly improved. Among the G20, Turkey performs quite well as it is the 13th biggest service exporter accounting for 0.95 percent of the global volume earning 46.9 billion in 2015. By exporting almost 70 percent more services in 2015 than in 2005, Turkey managed to hold its relative position behind Australia and stays ahead of its power competitors Mexico (ranked 15) and Saudi Arabia (18). Despite a virtually stagnating global share, the Australian edge to Turkey has narrowed due to the pacific country’s weakened performance.

Turkey has built up great military hard power, but the BPSM warns that its global clout has declined over the research period. Even before the 2016 coup attempt, the military was scaled down as the “Force 2014” program aimed at smaller, but more capable armed forces. This also pushed down Ankara from rank 6 among the states under review to rank 7 in 2015 (FORCE: MC -0.30; ICR -17.02). Despite the dismissal of around 100,000 personnel in 2014, Turkey commands the second largest NATO force personnel after the United States emphasizing great hard power projection capabilities. With more than half a million troops in 2015, Ankara presents higher troop levels than its competitors Mexico (2015: 336,000)
and Saudi Arabia (251,500).

In absolute terms, military spending increased by almost 20 percent over the research period, but remained slightly below the global trend illustrated by a negative lean in its steady world share (MC -0.02). Among the individual G20 states, Turkey has the 14th largest defense budget and has outspent Canada in 2015. While its $15.9 million budget is almost twice the size of Mexico’s, it does not even come close to Saudi Arabia’s spending volume of $87 billion in 2015. While Ankara’s domestic increase seems promising, its global position differs from the view of an ambitious military power buildup over the last decade. The government’s purge in the military after the failed coup even raised concerns in the NATO about worryingly thinned forces and an undermined troop morale.[1] The coup revealed the great rifts in the civil-military relations and prompted major restructuring efforts to strengthen the government’s control over the armed troops. While this is not recorded in the 2005-2015 BPSM, it reinforces the impression of challenged hard power despite its quantitative edge.

The categories of structural hubs reveal weak spots of the transcontinental power. Over the period of observation, its only entry on the Fortune 500 list is Koç Holding, the largest industrial conglomerate in Turkey. With this, Ankara shares the second lowest position with Riyadh, whereas Mexico has constantly presents three world-class companies on the list since 2011. This is exacerbated by finding that Turkey does not even have one globally leading university on the QS 200 list in the researched years. With this stagnation, it shares the last place with Indonesia. Then again, the quite positive publications trend signals that Turkey made significant strides in building up scientific and innovative capacities (PUB: MC +0.23; ICR +85.6). In this category it is even in front of Mexico, South Africa, Saudi Arabia, Argentina and Indonesia. Thus, despite a rising trend in human capabilities, Ankara performs poorly in rankings of structural competences and innovative capacities which are key powers in the globalized knowledge economy.[2]

The Monitor confirms that Turkey deserves attention as a global player that gained special leverage due to its unique location and hard power capabilities. Yet waning dynamic, rising internal as well as external tensions with its most important trading partners in the European Union and long neglected structural reforms have produced serious headwind for a vigorous global rise. This also destabilized Ankara’s soft power foundation on which it had built its flourishing tourist and EU rapprochement that have considerably enhanced its development perspectives. While the current BPSM reflects the shifts before the attempted putsch, worried NATO partners and aggravated signs of economic slowdown hint at an eroding power base that might lead to a negative rating in the next Monitor edition.