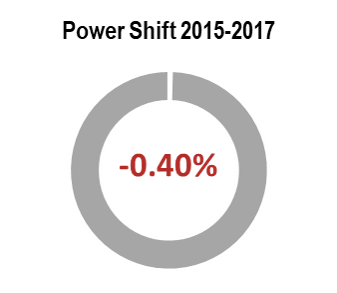 South Africa seems to continue its long-term trend at the Bonn Power Shift Monitor. Its Power Shift Rate, expressing its development of relative power compared to the other G20 countries, nearly stagnated for most of the last decade. Meanwhile, the Rainbow Nation´s absolute country rate increased steadily. During the most recent observation period of 2015/17, this pattern continues with zero relative power gains but a positive cross-category growth rate. As a result, South Africa continues to hold place 18 in our Power Score Ranking, with only Argentina behind it. Yet there is also an outlier. Although the Rate of Country Change, indicating the absolute growth, was only 0.18 percent during the previous phase of 2013/15, the absolute figures rose by 3.41 percent from 2015 to 2017. This underlines that even though South Africa´s relative power is stagnating, its absolute growth accelerated to some extent. 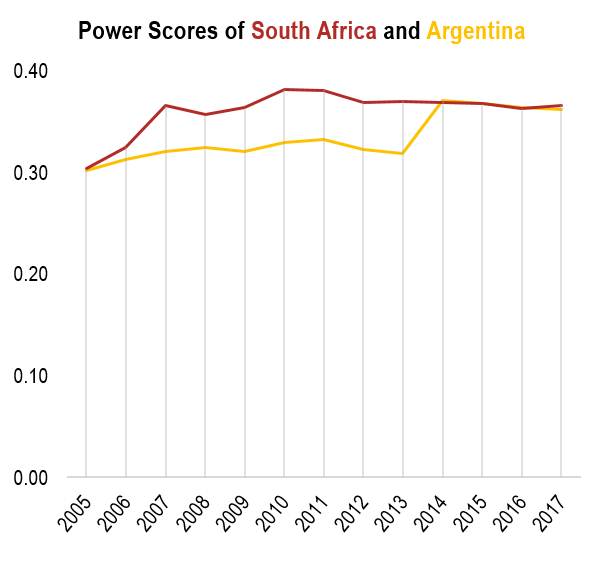 A closer look at the categories reveals that this growth is mainly due to economic factors. Even though South Africa faced strong absolute losses in merchandise and service exports in the 2013/15 period, lately it has achieved significant absolute gains in these categories. Additionally, its GDP (PPP) continued to grow with a similar pace than it had previously. However, all these increases could not translate into relative power advances, since many other G20 countries managed to make even stronger gains in those categories. 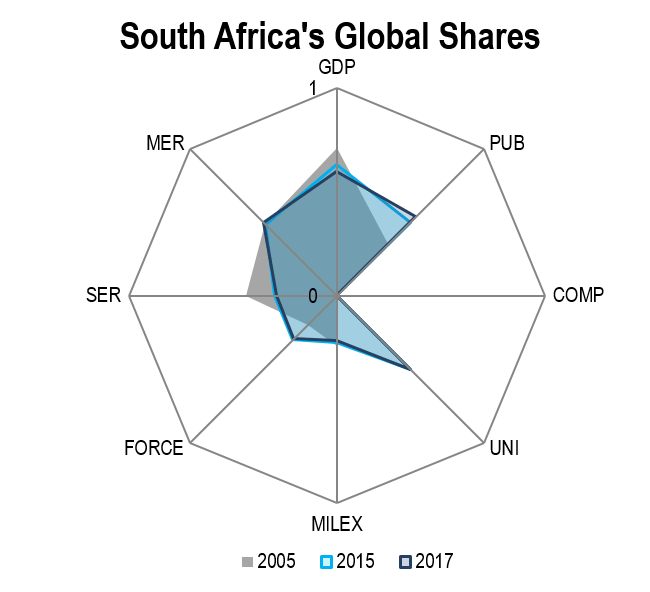 On the other hand, South Africa also made absolute losses during the most recent period. This can be seen in the military categories. Both, the number of armed forces and the amount of military spending, which were increasing before, decreased lately, albeit moderately. When it comes to top universities and companies, the trend of absolute stagnation of the last periods remains unchanged, as the Indicator Change Rate of 0.00 for both shows. In contrast to this, the number of scientific publications continued to increase albeit at a slower pace than before. With an absolute increase of publication numbers by 13 percent, South Africa gained, however, only 0.04 percent in global shares. Still, the BPSM records a significant upward trend since 2005.

Despite its increased economic dynamics and the absolute power growth, South Africa still fails in winning international power in significant dimensions. Nevertheless, it is likely that South Africa will be able to defend its place in our Power Score Ranking in the near future, since Argentina, ranking right behind South Africa, is unlikely to increase its power neither any time soon. 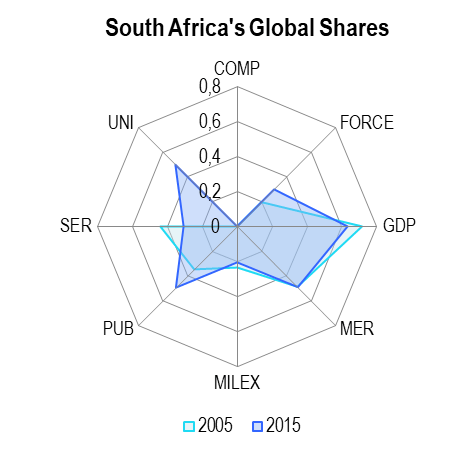 As the only African country in the G20, the Rainbow Nation holds a special relationship to the world’s leading economies as well as to its African neighbors. After being invited to the BRICS in 2010, its extraordinary international reputation as an emerging economy has increased. The Bonn Power Shift Monitor notes that South Africa has indeed gained weight as it enlarged its 2005 power base by 21 percent in 2015. From a global perspective, its power shift is only marginally positive (PSR +0.06) because other states have outpaced its growth trajectory.

With a Power Score of 0.37 in 2015, South Africa finds itself at the bottom of the G20, almost on par with Argentina. The considerable distance of more than 0.5 points to next highest ranking Indonesia further underscores the weak position of these two emerging countries. In detail, South Africa is among the weakest four individual G20 members in all BPSM categories – for military spending, GDP and leading companies, it is on the lowest rank. In contrast to this, it has only increased its global footprint in top universities, scientific publications and armed forces. Although the African state still presents a positive Power Shift Rate and thus increased its global influence over the years under review, the mixed ratings call into question South Africa’s special reputation in the world.

South Africa has gained international appreciation for its relatively peaceful transition from apartheid to democracy in the 1990s. With Nelson Mandela leading and symbolizing the change, South Africa joined regional and global institutions as a unique success story. Its integration into the world trade has pushed the economy forward, though it was surpassed by Nigeria in 2014 as Africa’s largest economy. This underlines South Africa’s special, but also delicate role on the G20 stage: It is seen as the ‘Gateway to Africa’ and oftentimes as a representative of the continent, without having an official mandate for this role and without actually being among the 20 largest economies around the globe.[1] 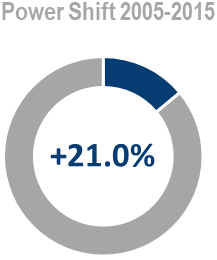 Even though South Africa is member of several regional and international institutions, it failed to keep up with the developmental trajectory of other emerging economies which is visible in stagnating or even marginally falling global shares, particularly in the economic categories of the BPSM. Nevertheless, South Africa presents positive domestic sums in all but one (top companies) categories. In general, this reflects a positive development for the country, whereas the closer breakdown reveals setbacks in its upward trajectory – particularly in the last years, which resulted in stagnating or slightly negative international shares for GDP, merchandise exports and service exports.

South Africa’s rise was promoted under Mandela and Mbeki, when South Africa pushed forward African integration and played a leading role in the establishment of the African Union. During the presidency of Jacob Zuma, however, South Africa lost its previous international profile and charismatic soft power appeal. Nevertheless, the country profited from rising material demands of its BRIC-partners which facilitated its remarkable recovery from the global financial crisis in 2009 as reflected by rising export rates for services as well as commodities.[2] Yet the BPSM records the impact of slowing international trade since 2011, particularly by the time of the drought period of 2014-2015 when South Africa’s service and merchandise exports declined even steeper. From a domestic view, the downturn hints at difficulties with managing inflation and unemployment.[3] In a G20 comparison, the decreasing numbers of South Africa present similarities to Argentina’s merchandise trade curve, hence raising questions about global dynamics of weakened trade.

The government has formulated a 2030 strategy to manage structural weaknesses. Launched in 2012, the National Development Plan (NDP) points out nine challenges, among them poor infrastructure, low education, social grievances and weak governance that the administration aims to address in a sustainable manner.[4] The plan was greatly appreciated on a global level as it provides a roadmap in terms of the sustainable development agenda of the United Nations.

In view of its low-scale scientific profile as noted by the BPSM, these efforts aim in the right direction. South Africa has indeed increased its relative and absolute weight in the categories universities and publications. Since 2007, the University of Cape Town is listed among the globally leading universities but remains the only South African university among the Top 200. With this, South Africa is on the same level as Argentina, Italy, Mexico, Russia and Saudi Arabia. While this is the strongest positive contributor to South Africa’s Power Shift Rate, its underperformance in leading science is emphasized by only presenting one globally renowned university.

On the other side, South African publications more than doubled between 2005 and 2015, which also enhanced its scientific influence in relative terms. Having published more than 11,400 scientific articles in 2015, South Africa counts fewer publications than the OECD average, but significantly more than Saudi Arabia, Argentina and Indonesia – which too pushed their research output. In combination with raised public expenditures over the years, the government has shown increasing willingness to upgrade its innovative potential and strengthen its human capital. In view of budgetary constraints, exacerbated by drought, sustainable funding in education and research remains a central obstacle.[5] Even though South Africa remains among the weak performers of the G20 states, its scientific push is outstanding as a category oftentimes overlooked in its meaning for international power.

By international standards, South Africa holds a low-level hard power profile. In 2015, it had the lowest military expenditures among the 19 states under review spending only $3.46 billion. With this, the country financed the third smallest armed forces on the list (only Canada and Australia having smaller forces). In a regional context, however, South Africa remains a military heavyweight. It mainly deploys its troops for international interventions for example under a mandate of the AU and tries to establish itself as a conflict mediator. 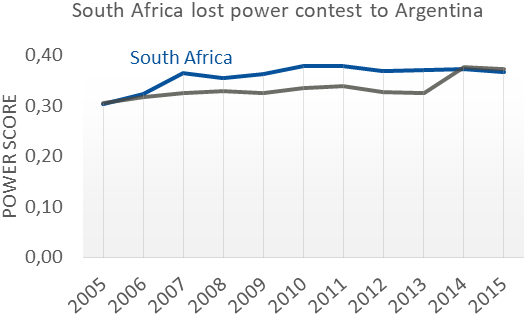 Besides its low global defense profile, its domestic development raises further doubts about South Africa’s future defense capabilities. Its military expenditures were raised by only seven percent (ICR) between 2005 and 2015 which remains below the world’s average (MC -0.03). On the other hand, the government increased its troop level from 56,000 to around 82,000 meaning higher maintenance costs. This is a 46 percent raise in staff (MC +0.1) without an appropriate increase in spending. Therefore, BPSM finds rather ambivalent tendencies for South Africa’s military hard power. The issue was even acknowledged by the ministry of defense, warning that the defense forces are in a process of operational decline.[6]

Coordination for a Shining Rainbow

In general, South Africa has experienced great transformation that propelled the country onto the favorable stage of global decision-making. With this, it earned the reputation as a bridge builder and ‘Gateway to Africa’ producing an immense potential for soft and structural power. On the other hand, the country exposes great vulnerabilities, e.g. in social, administrative and environmental terms that keep it from realizing its full potential. Despite the fact that South Africa is criticized for being an unelected ‘gateway’ on the world stage, the nickname offers a unique chance for integration. Greater cooperation with other African states such as Nigeria or Kenya would help South Africa to effectively voice common interests at global negotiation tables, reshape its continental reputation and also push its rise back to the global pace. Its challenged position in the G20 is not only stressed by countries with larger markets such as Nigeria, but also South Africa’s very own struggle to preserve or even expand its power. The Rainbow Nation seems to build on its shining past, but has yet to foster its emerging capacities in order to stay competitive on a regional and global level.