Mexico: Promises of a New Trajectory?

The Bonn Power Shift Monitor records mixed results for the Latin American country: While it boasts a remarkable cross-category growth of 11.75 percent in absolute terms, its PSR of 0.03 between 2015 and 2017 is only just positive. A detailed look at Mexico’s power composition across the evaluated indicators offers insights into what could possibly be a new trajectory for the federation: while its slow but steady upturn after the years of economic crisis had been fueled mainly by gains in the categories of armed troops and merchandise exports, Mexico owes its renewed gains between 2015/17 mainly to top universities and service exports. 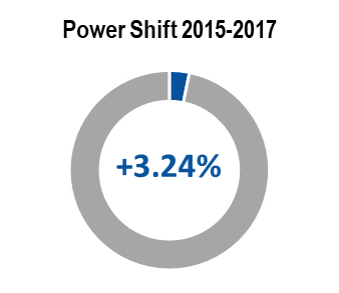 The education and science sector indeed was the main catalyzer for positive change for Mexico in the observation period. Scientific publications have slightly increased in numbers, although they do not yet contribute much to a higher overall Power Score. Regarding universities, however, Mexico benefits from the addition of the Monterrey Institute of Technology and Higher Education to the QS world ranking, thus increasing its global shares from 0.50 percent to 1.00 percent. An overall number of two distinguished universities does not yet make Mexico competitive with many G20 nations. With universities being hubs of innovation however, it might nonetheless signal a shift in its trajectory. The second indicator responsible for the positive side of Mexico’s 2015/2017 development can be found in the economic realm: between 2015 and 2017, country shares rose from 0.46 percent to 0.51 percent. It also saw a solid absolute growth within the categories of GDP and merchandise exports, but only managed to uphold its status quo in relative terms. 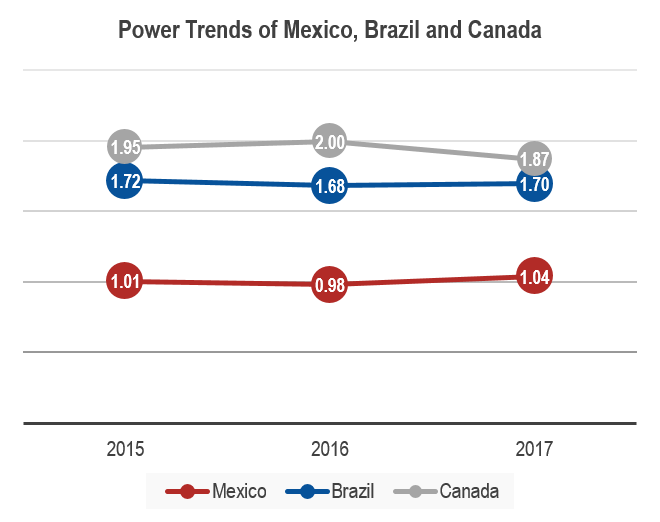 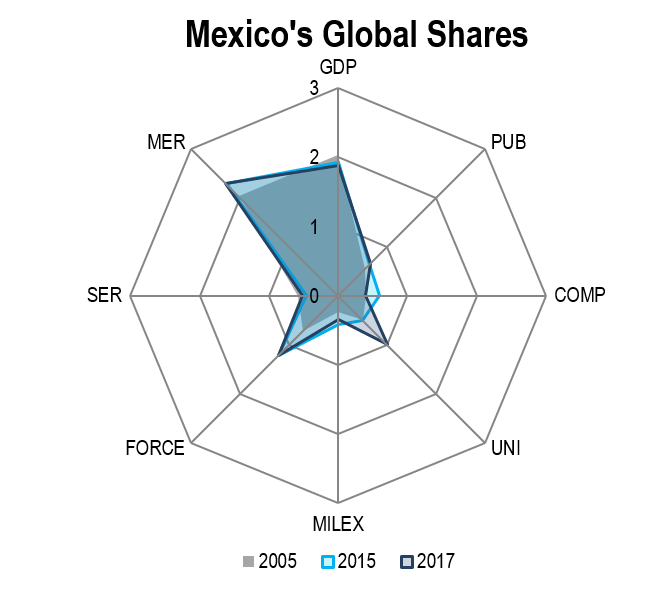 Other indicators also present a dimmer picture for the Latin American republic. The military sector, for one, displays an overall negative or stagnant development. Mexico’s armed forces have not been stocked up in personnel, although the country managed to retain almost identical shares. Military expenditures have decreased, which results in a visible loss of its already small global shares (from 0.42 to 0.34 percent).

Mexico’s mixed, yet mildly favorable development singles it out among its northern neighbors, with the US and Canada among the power losers regarding PSR. It cannot, however, offer much in reply to their negative impact on the continent’s negative power record in the latest BPSM period. What’s more, when compared to the other Latin American nations within the G20, Mexico stands out as the only one to boast a positive PSR within the observation period. 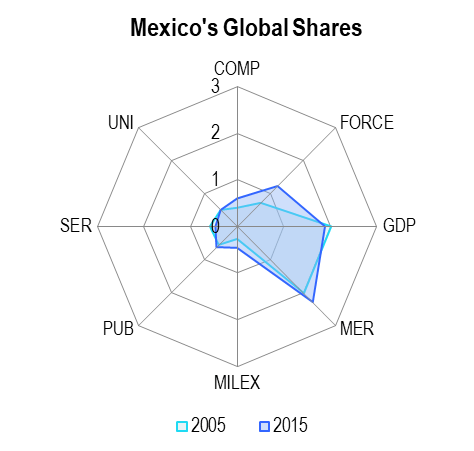 Mexico is often viewed as an essential bridge between North America and Latin America due to its unique geographical position.[1] This is related to a  special interest in the country’s development and international role. Mexico’s power shift profile exhibits rather an undulated development. In general, Mexico belongs to the global power gainers on our BPSM ranking corresponding with a positive Power Shift Rate of +0.12. Comparing its original 2005-power status with the 2015-ranking, Mexico’s capacities have grown by 14 percent. This upturn is mainly owed to its gains in the categories of armed troops and merchandise exports. By contrast, its positive development in the categories GDP and service exports stay behind the global pace and thus curbed Mexico’s Power Shift Rate. Nevertheless, the BPSM scores indicate that Mexico is indeed an emerging power within the G20.

Taking a closer look at the changes over the last decade, the phase-based Power Shift Rates reveal that Mexico was hit hard by the global financial crisis. While it gained international shares from 2005 to 2007, it lost them again to some extend in the following phases until 2011. Since then, Mexico is on a rise again. Having said that, these rebounded positive Power Shift Rates remain significantly below the original growth rate of the first phase. Tis indicates a lost but recuperating vigor in Mexico’s rise for power. 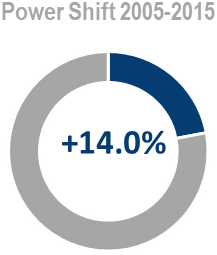 Though Mexico shows positive absolute growth rates for the economic categories comparing 2005 to 2015, there has been a severe decline in the GDP, merchandise and service export level from 2008 to 2009 when the financial crisis culminated. This in turn had an impact on Mexico’s global shares, which have fallen in the categories GDP and service exports, although the overall development remains positive. In terms of merchandise trade, the country has managed to increase its weight both in absolute and relative terms (MC +0.27; ICR +77.69). In this category, Mexico exhibits even more vitality than its traditional rival Brazil, which, however, boasts a stronger power rise on our BPSM scale. The impression of a rebounding economy is corroborated by the fact that there were three Fortune Global 500 companies situated in Mexico in 2015, while there were only two in 2005. Yet the biggest Mexican company on the Fortune 500 list, Pemex (rank 47), points at challenges of corruption and falling crude oils prices in the last years that also affect Mexico’s merchandise and service trade.

The economic numbers stress Mexico’s extraordinary dependence on the United States. For example, in 2015, Mexico exported more than 80 percent of its goods to the United States. In turn, almost half of its imports originated from its Northern neighbor.[2] The close ties between these countries and little diversification of export destinations hint at factors for the severe impact of the global financial crisis on Mexico. Closely related is the image of Mexico belonging more to the North than to the South which has created some hurdles for the diversification for trade and sets limits for its soft, hard and structural power. The special observer status of Mexico within the South American Community of Nations (UNASUR) for example excludes it from the benefits of a full membership and expresses its reputation as belonging to the North instead of acting as a “bridge” to the South.[3] This seems all the more important as the reform package “Pact for Mexico” did not stimulate extraordinary economy growth.[4]

The Militarized War on Drugs

Internal challenges, especially widespread organized violence and drug trafficking, keep Mexico busy and seem to restrain its rise. The militarization of these internal challenges is visible in the enormous rise of military expenditures as well as the substantial increase in the number of force personnel. Measured by the BPSM, Mexico boasts the highest increase in defense forces among the individual G19 states in both absolute and relative terms (MC +0.51; ICR +64.73). The trend stands out because on average, the number of force personnel in the world has decreased from 2005 to 2015. In fact, the buildup of its military forces is the strongest plus factor of Mexico’s positive Power Shift Rating. In a G20 view, Mexico commands the tenth largest force personnel in 2015, whereas in 2005, it would be ranked fifteenth. In the course of this buildup, Mexico surpassed the personnel levels of the UK, Germany, Saudi Arabia, Japan and France.

Considering the absolute numbers of military expenditures as well as operational forces, Mexico has bolstered its capacities since 2005. Nevertheless, it clearly lags behind the Brazilian level by not even reaching half of the respective troop or expenditure level. In contrast to this, Mexico surpassed Argentina’s military spending in 2009 and commanded more troops already in 2005. In a G20 comparison, Mexico presented one of the smallest defense budgets on rank 16 out of 19 in 2015. To illustrate, next higher positioned Canada has a military budget of almost twice the size of Mexico’s. The Monitor thus finds Mexico’s hard power footprint expanding, yet staying behind the sophistication of the established powers and its regional competitor Brazil.

Studying the Mexican capacities for innovation, the picture seems to be mixed at best. Mexico holds only one top university, the Universidad Nacional Autónoma de México (UNAM), on the QS 200-list over the period of observation. With this, Mexico ranks poorly in world-class education but is not alone with this position in the G20. Argentina, Italy, Russia, Saudi Arabia and South Africa present the same weak number, while Indonesia and Turkey do not even house one top university. Again, Brazil is in front of Mexico housing two world-class universities in 2015.

Although this indicates certain limitations to top education in Mexico, the number of scientific publications has been rising. In comparison, these numbers do at no point in time compete with the Brazilian research output. This also indicates the incremental increase of global shares of Mexican outputs (MC +0.07 percent) in comparison to Brazil’s (MC +0.84 percent). Mexico’s government seems to orient towards better education indicated by rising government expenditures and education reforms in the Pact for Mexico.[5] In order to compete on a regional level with other power risers such as Brazil, as well as to increase its soft power and long-term structural capacities, greater efforts and political dedication in the domains of education and innovation are needed. 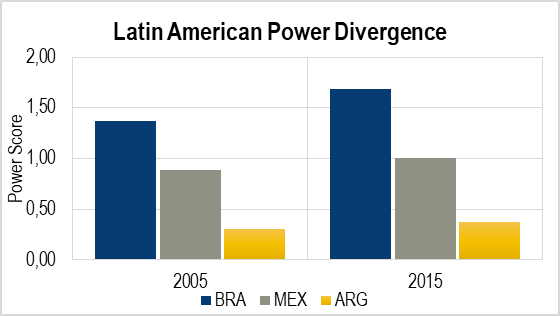 Over the period of observation, Mexico managed to further its rise in the international system of states which corroborates its reputation as an emerging state. In comparison to other risers, its development is rather moderate qualifying it as a mid-level gainer. In a regional comparison, it loses the traditional competition to Brazil. The southern riser records greater global weight in all but one – the merchandise exports – category. Having said that, Mexico’s leading edge in this category in front of Brazil has increased while it was surpassed in other domains such as service exports by the competing nation. Both countries managed to push to higher ranks on the power ladder of the G20. On rank 15 by aggregated power, Mexico stays at the weak places signaling its improving yet comparably weak international leverage in the system of states.