China has continuously recorded power gains over the entire period from 2005 to 2017, but the Power Shift Rate (PSR) has slowly been declining since 2013. From 2015 to 2017, China’s Power Score has risen from 12.3 to 12.75, an increase of 0.45 percentage points, which means that its power growth has decelerated compared to the PSR of 0.95 in the period of 2013/15. This development reveals that China’s catching-up to the United States has slowed down since 2013, although it continues to progress. Turning to the percentage changes in power from 2015 to 2017, China’s progress of +3.6 percent remains far behind India’s power plus of +10.8 percent. Still, China´s absolute growth among all categories (CC) is as big as 5.21 percentage points, making it the 6th biggest absolute winner in the recent period. 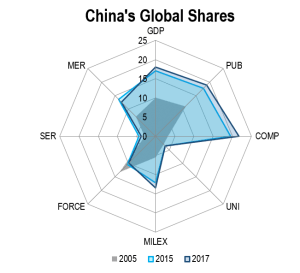 China has occupied second place in the BPSM G20 power ranking since 2005. Although the United States’ power share has declined by -0.48 from 2015 to 2017, Washington is still in lead with nearly six Power Score points ahead. Compared to 2015, the poles United States and China continue to dominate the ranking on a similar scale, although the distance between the two has further narrowed. Taking a closer look at the development within the power categories, China presents no change in the category of top universities, staying at seven, while it managed to increase the number of Chinese companies among the Global 500 from 98 to 109. Nonetheless, the United States still lists 23 more top companies. However, in terms of scientific publications, China managed to surpass the USA as the world’s leading publisher in 2016. Since 2015, it raised its output by more than 12 percent, publishing 456,960 scientific articles in 2017 – to compare, the US published 423,529 articles in that year. 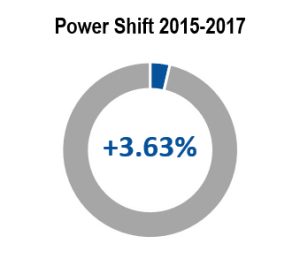 Since 2015, China has slightly decreased its merchandise (-0.45 percent) and, even more so, its service export numbers (-5.03 percent), which results in a decrease of its global shares in those categories as well. Nevertheless, Beijing still comes in first in merchandise and fifth in service exports, both absolutely and relatively. The Chinese GDP (PPP) has grown further, with an in-crease in global shares of 0.99 percent, thus reaching its high at 18.08 percent of the global GDP in 2017. China also increased its military expenditure by 11.22 percent in absolute figures and occupies the second place after the USA with 13.4 percent of the G20
states’ expenses. With a further shrinking of its armed forces by -5.21 percent to a total personnel number of close to 2.7 mil-lion, China continues its modernization course in the military sec-tor. The mantra of quality over quantity has already been observed in the last BPSM episode, leading to the consequence that China lost its leading position in the armed forces category in 2016 and now comes in second behind India.
As a result, China now ranks first among the G20 in three categories: GDP, merchandise exports and scientific publications. Despite its slowed down power growth, China has still been the biggest winner of relative power (PSR) between 2015 and 2017. Due to its decelerated growth, the BPSM power forecast projects a later date of power parity between the USA and China. In the 2018 BPSM forecast, the medium estimator expected China and the USA to present the same power level during 2021. Due to the new dynamics, this date has been postponed to mid-2023. In some economic domains, China has already replaced the United States as world leader which signifies an extraordinary increase in hard, soft and structural power. Nevertheless, China still has to manage a multitude of internal and external challenges that endanger the sustainability of its rise, as well as reaching the next level of de-velopment, whose impact on China’s future power and its BPSM position still needs to be seen.

Bipolarity on the Rise 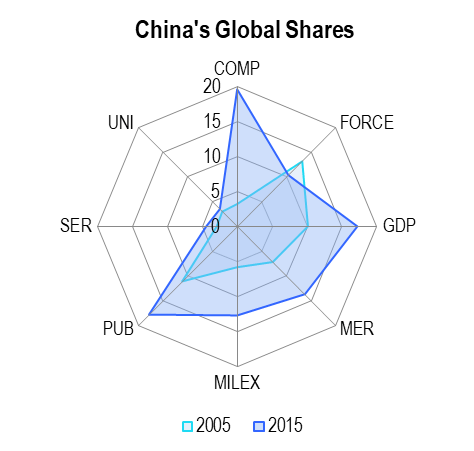 The Bonn Power Shift Index reveals that China’s power significantly increased between 2005 and 2015. Within just a decade, China managed to increase its power by 75.7 percent based on our indicators, presenting also the highest Power Shift Rate (+5.35) of the nineteen countries under review. China is the top power gainer in five out of eight categories (GDP, merchandise exports, service exports, military expenditures, top companies, and scientific publications). With this shift, China holds the pre-eminent position in the categories GDP, merchandise exports, and armed troops. Its most important power gain is observed in the category top companies, as China houses the second most leading businesses in the world after the United States and has thus overtaken Japan, France, Germany and Great Britain since 2005.

China is increasingly catching up to the world leader, albeit not fully attaining the United States’ power level. In comparison: While the USA boasts a Power Score of 18.63 in 2015, China has grown up to 12.42 points emphasizing the narrowing gap between the two countries. This suggests that the global world order is moving towards bipolarity with two power centers in the  West and the East.

The BPSM reveals the magnitude of China’s rise since only 2005. During these years, China has almost tripled its GDP (MC +7.07 percent), merchandise exports (MC +6.51 percent) and service exports (MC +1.51 percent) which translated to greater weight in these domains on the international level. The upturn is closely related to China’s WTO accession in 2001 that enabled “the workshop of the world”[1] to enter a new phase in globalization and trade relations, but also expanded its export dependency. As a result, China has not only caught up to the  United States, but has even overtaken its leading position in GDP measured by purchasing power parity and merchandise exports. More specifically, China exported 13.71 percent of all global merchandise while the United States traded as much as nine percent. These numbers signal that China has shifted economic power in its favor which enables it to pursue far-reaching trade and infrastructural programs, the most prominent of which is the One Belt One Road Initiative. The New Silk Road reminds of ancient times of Chinese supremacy which is also part of the “Chinese Dream” envisioned by Xi Jinping aiming to restore the country’s status as a leading power.[2]

While China has taken the lead in merchandise trade, it is by far not the greatest service exporting country. Though it has considerably increased its global weight, China finds itself behind the United States, Great Britain, Germany and France. This points at the strategic advantage of traditional “Western” powers in immaterial and knowledge-intensive sectors which is nevertheless increasingly challenged by China. The boom of globally leading companies signals China’s evolving internal market as well as international competitiveness. No other country in the BPSM has managed to raise more leading businesses in the review period than China. In 2005, there were only 16 Chinese corporations under the Global Top 500. In 2015, there were already 98 entries – an increase of unrivalled 512 percentage points. Finding many domestically orientated firms on the list seems to be unsurprising regarding China’s growing population size and purchasing power. On the other hand, technological companies like Lenovo or Huawei stress its competitiveness in knowledge-intensive sectors on global markets.

Considering its flattening growth rates during the past years, the sustainability of its rise seems questionable. Having said that, its growth is still remarkable compared to the developed countries, signaling that China has not yet reached its full potential.

Economic upswing has also translated into upward mobility for hundreds of millions of Chinese related to e.g. vast investments into research and education, as well as social reforms.  Combined with more than quintupled government spending in education under the Hu-administration, China’s society and economy is gradually shifting towards sophistication.[3] This seems to be reflected by the top universities and scientific publications categories of the BPSM. The former observes the improvement of scientific reputation with the Zhejiang University entering the Top 200 ranking, so that China housed a total of seven leading universities in 2015.

Although the number of top-rated universities has changed only incrementally, the number of scientific publications more than doubled between 2005 and 2015. On the international level, China almost reached the level of the US output with a total of 411,268 scientific articles in 2015 (USA: 429,139). In relative numbers, this is an increase of 6.72 percentage points since 2005 in global shares with Chinese publications counting for 17.6 percent of all S&E articles (USA: 18.61 percent). With this, China has become the second largest publisher of scientific articles in the world and even the largest producer in the field of engineering articles.[4] This figure stresses China’s rapidly developing capabilities that translate into a structural economic transition from the primary to unfolding secondary and services sectors.[5] Moreover, the figures indicate that China is becoming a research and development nation with the capabilities to invent the technologies of tomorrow, wiping off its former reputation as a copy-and-paste-country. 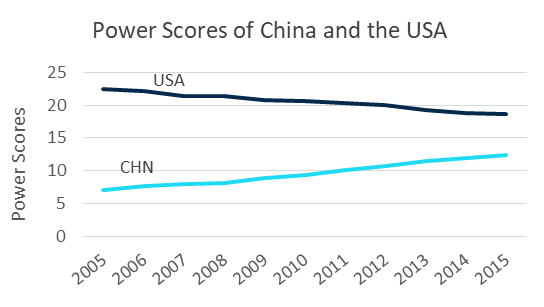 Turning to the hard power military categories of the BPSM, two divergent trends are revealed: The number of armed troops decreased, whereas military spending increased. Though China decreased its troops by almost 25 percent, it still has the largest force personnel in the world commanding more than 10 percent of the global armed troops. India closely followed the Chinese level in 2015 presenting a force personnel size smaller by only 44,000. Given its qualitative military capacities, observers estimate that China still lags behind the United States’ defense capabilities, yet its modernization strategy does not go unnoticed.[6]

Its military expenditures have more than doubled over the review period (ICR +166.96 percent). Allocating more than $214 billion in 2015, China is the second largest defense spender in the world, but does not account for even half of the United States’ expenditures of $596 billion. In other words, China spends as much as 12.7 percent of the global defense expenditures, whereas the United States contributes more than 35 percent. The Chinese Ministry of Defense underlines the issue of modernization in its Whitepaper[7] emphasizing e.g. cyber defense and maritime capabilities. The magnitude of this modernization effort becomes clear looking at the third largest military spender Saudi Arabia that contributed just more than five percent to the global volume.

Over the last years, China has risen to the global top. Even though it has not overtaken the United States as the world’s political hegemon, it certainly has the potential to rise up to its side in the near future. Projecting the BPSM aggregated scores, China will catch up with the United States in the 2020s. In contrast to the uncertainty of this forecast, the Monitor notes that in certain economic domains, China has already replaced the United States as the world leader which signifies an extraordinary increase in hard, soft and structural power. Owing to this pre-eminent position in the international system, China can increasingly voice and assert its interests and attract other countries to follow its lead. Nevertheless, China still has to manage a  multitude of internal and external challenges that endanger the sustainability of its rise, as well as reaching the next level of development. Party leader Xi Jinping has thus proposed  numerous reforms countering corruption, modernizing the military and restructuring the economy, whose impact on China’s future power and its BPSM position still needs to be seen.