The United States remains the most powerful country of the G20 in 2017. Although it is still on a relative decline from 2015 to 2017, its downward curve has further flattened. China, on the other hand, continues to expand as number two in our rankings, but its relative power growth is slowing down significantly. As a result, China’s catching up to the USA has thus decelerated since 2013, although it continues to progress. The United Kingdom, which in 2017 was still ranked the third most powerful country in the G20, can be considered the biggest loser in the recent period and is also the only country with relative and absolute losses.

Surprisingly, Germany and Italy, whose global shares of power have been declining for a long time, saw a significant recovery in the years 2015/17. For the first time since

2009, Italy was able to climb back into the top 10 of the most powerful G20 countries, while Germany has managed to retain its fourth place since as early as 2014.

Despite its slowed down power growth, China has still been the biggest winner of relative power between 2015 and 2017, closely followed by the strongly power expanding India. The Asian riser surpassed France in 2016 and now holds the 5th place among the G20, even surpassing Japan, which comes in 6th. India is thus making a major contribution to the further increase of power shares in the Asian region between 2015 and 2017.

Taking a closer look at the chasing pack: While the gap between the midfield states and China has widened between 2015 and 2017, there is evidence of a convergence of power among these countries. The leveling of power that we already described in the last issue of the Bonn Power Shift Monitor thus continues.

In addition to the top 10 countries, both Saudi Arabia and South Korea developed unexpectedly. For while South Korea and Saudi Arabia have usually been among the winners of power shares, the percentage of their relative global power shares fell in the 2015-2017 phase. While their absolute country specific development (CC) is positive, the values are below the average for the G20 states. Taking a closer look at their power scores, South Korea has been able to slightly recover from 2016 to 2017, whereas Saudi Arabia keeps its downward trend.

At the bottom of the BPSM power score ranking are Argentina and South Africa. Although they present overall positive power shifts since 2005, the two states remain the weakest of all members and have been unable to pave their way up the ranking. For the latest period of observation, both countries seem to be stagnating with a slightly negative sign, so that the gap to next higher ranked Indonesia has increased from 2015 to 2017.

Within the G20, three major geographic power centers can be detected: First, the North American center under the leadership of the United States of America; second, Europe as a composite power center of the United Kingdom, Germany, France and Italy; and third, an Asian center with China as its main regional power. However, in contrast to 2015, a shift in power towards Southeast Asia can be seen in this region due to the rise of India.

From 2015 to 2017, we detect a further decrease of regional power in Europe and North America, a continuation of power growth in Asia and a seemingly stagnating South America, as well as a slightly positive turn regarding the two countries of South Africa and Australia subsumed under „Other“. Therefore, the Asian rise still continues in 2017 with a widening power gap to the traditional powerhouses. This fits well with the overall development from 2005 to 2017, as only the regional weight of Asia and South America has increased in the last 12 years, while that of North America and Europe steadily decreased. As a result, Asia has overtaken North America as the strongest region among the G20.

Most noticeable among the Asian G20 countries, India’s power growth accelerated, visible in its power shift rate (PSR) that rose from 0.27 in 2013/15 to 0.43 in the 2015/17 phase. Contrary to this, China’s growth rate decelerated sharply from 0.95 to 0.45. In Europe, Germany and Italy have turned around their previously negative developments from -0.13 and -0.12 to 0.12 and 0.16 respectively. Contrary, France and the UK present a loss in power. Especially the UK underwent a negative turn: Its 2015/17 losses of -0.41 exceeded its small power gains of 0.08 of the previous phase. In South America, both Brazil and Argentina are comparatively stagnant and even featured a negative prefix for the last years of observation.

Klick to see the gallery: 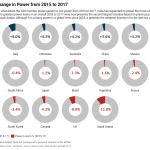 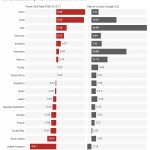 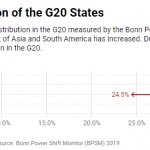 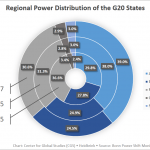 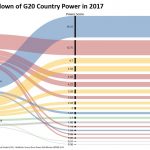 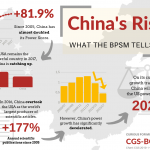 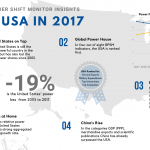 The loss of relative state power cannot be equated to stagnation or decline within the countries. In a general 2005 to 2017 trend, all G20 member states still show a positive absolute development. In other words, each state under review has improved its internal capacity in absolute terms in an overall trend, expressed as the average of all categories. However, if we take a closer look at the last phase from 2015 to 2017, the United Kingdom is the only country that shows an aggravating downward trend in its Rate of Country Change (CC). This score is a longitudinal measure for each state’s performance – the higher, the better. As the CC-score is based on a country’s internal development, it reflects better the magnitude of change as it is not downgraded by the size of others (which is the cross-sectional PSR-score).

This is particularly evident in the examples of Indonesia and Mexico. Both countries show strong domestic growth, even though they remain small by international standards. In the 2005/17 review, Indonesia’s internal development is even better than that of China and India.

The current 2015/17 ranking of absolute power gains, however, surprises with Italy in first place (40.99 CC), Indonesia in second place (25.88 CC), India in third place (18.41 CC) and Mexico in fourth place (11.75 CC). While this is a continuation of the already known trend for the three Asian countries, the current strong positions of Italy and Mexico is a novelty. In the case of Italy, the CC increase is among others determined by the inclusion of three Italian universities in the ranks of the global top 200 universities.

Also of interest is Saudi Arabia’s development: The country is among the five strongest power gainers in an overall 2005 to 2017 view, but it has lost the biggest percentage (almost -11%) based on its power score from 2015 to 2017. While its country developments (CC) are overall quite unsteady, its latest scores remain under the G20 average and also result in a relative power loss.