The Bonn Power Shift Monitor (BPSM) uncovers and analyzes the shifts in international power relations between the world’s leading industrialized and emerging economies  . Our goal is to raise awareness of power shifts and to invite business, politics, and society to discuss the consequences and policy responses to these changes across borders. Further, it is equally important to us, to stimulate the debate on power concepts, as well as traditional and innovative measuring methods.

Even though the focus on states as actors indicates a classical realist view, we apply an eclectic understanding of power to the BPSM. We prefer neither an aggregate, nor a relational, nor a structural conception of power, as we consider them compatible in analytical and operational terms (in agreement with Barnett and Duval), although they certainly emphasize different aspects. Furthermore, the sources of those power categories are by no means separable in any empirically meaningful way. Accordingly, our indicators are not subjected to any artificial ad hoc taxonomy. Each change monitored by the indicators may translate to shifts in aggregated, relational, structural, soft or hard power underlining the multi-faceted nature of such categories. Assessing which dimensions of power are affected by the shifts and to what extent therefore remains an analytical question that creates wide interpretive spaces. With this approach, the BPSM departs from traditional power measures that focus only on one (ad hoc predetermined) power concept, and neglect the influence of other factors. 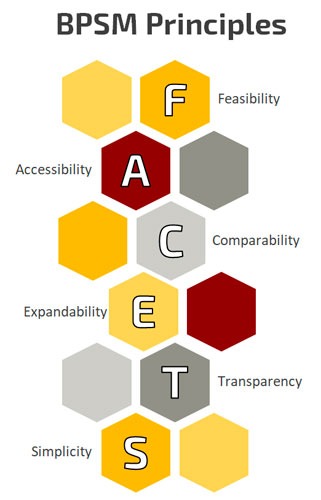 Based on this, the model considers the classic resource capabilities, the impact on related actors, a country’s attractiveness, and its ability to innovate structures. This reflects our understanding that power is composed of the capacities, willingness and ability to assert interests. If one of these components is missing, an actor’s power decreases, i.e. the ability to achieve political victory, diminishes.

In a word, the scores and shifts provided by the BPSM are intended to be a tool for analysis. They help explain and predict the developments in the international relations among states, as well as their power or powerlessness in the international system. In order to be useful and reliable as a research instrument, the BPSM is based on six principles: feasibility, accessibility, comparability, expandability, transparency, and simplicity. Their initials build the acronym “facets” which directly refers to our basic idea of integrating theories of power into one model. By using only freely available data, the BPSM provides unparalleled accessibility, extensibility, and transparency for researchers, students, and beyond. It avoids definitional fuzziness and statistical complexities in its theoretical and calculation model to ensure the simplicity of the approach. With this, the model remains comprehensible to the public and easily extensible. This, in turn, ensures the comparability of results and feasibility of analyses beyond the project.

Please note: The data has been completely updated in 2021. Due to this update, the numbers and results of the 2019-report have changed to some extent. Please make sure that you refer to the respective year when you quote the BPSM. World numbers are based on available data and may thus deviate from reality.

GDP (PPP) is the value of all final goods and services produced within a country in a given year provided in a standard measure by purchasing power parity (PPP) rates. GDP (PPP) in current international Dollar was selected as an indicator, because it illustrates the overall state of an economy, its purchasing power in international comparison, the size of the national market as well as the general economic prosperity. The basic assumption is that the higher the GDP (PPP) of a state, the higher is its economic power in the international system. This in turn affects different hard and structural power aspects, e.g., to influence bargaining processes such as trade agreements or to enforce sanctions.

Exports of goods and services

Exports of goods and services record the entirety of all tangible and intangible commodities delivered across a state’s border. This indicator illustrates the integration of a state’s economy into global markets as well as its competitiveness. It not only appraises material power structures, but also immaterial ones such as financial flows, communication and information structures, as well as knowledge. The indicator reveals the shifts on the global trade market, hence market power shifts between the leading export nations. Higher exports of goods and services translate into the capacity to influence international economic structures and shape them according to a state’s interests.

The world’s largest companies, as ranked by revenue in  the Global Fortune 500, shape the economic structures around the globe. These companies represent engines driving globalization, innovation, production, and communication. In this way, they contribute to the hard, soft and structural powers of their home countries in various ways similar to universities. More specifically, leading companies particularly shape the financial flows and thus interdependent structures at the global level illustrating the structural power a country. Giving another example, leading companies boost national reputation by serving as globally known brands which contributes to a state’s soft power.

The total reserves of a country comprise holdings of monetary gold, special drawing rights, reserves of IMF members held by the IMF, and holdings of foreign exchange under the control of monetary authorities. This indicator is a measure for a state’s stability and contributes to its hard power. A high volume of reserves also gives a country structural power advantages by reducing its external dependence on other states, institutions or political actors. By leveraging reserves as a means of economic power, a state can influence the behavior or interests of other targets. A country’s total reserves have become increasingly important in recent years as direct military intervention has declined as a means of gaining hard power over other political entities.

Defense spending in constant 2018 million USD illustrates the trends of a country’s military expenditures over time by adjusting it to a consistent base year measure. This process-oriented category reflects a state’s willingness to gain military might and thereby hard and structural power in international relations. It also indicates national preferences, for example security perceptions and risk assessments, military modernization, as well as the preparation or involvement in armed conflicts. In brief, the defense spending of a state illustrates its willingness to change to status quo of global power structures and predicts possible power shifts.

The world’s top universities are monitored by the QS World University Ranking. Leading universities are central hubs of scientific knowledge production and a country’s academic outreach on a global level. Depending on the research, universities contribute to the hard, soft and structural power of their home countries in various ways. More specifically, leading universities illustrate the research quality, international connectedness and academic reputation of a country which provides soft power in form of prestige or the attraction of academic staff. The indicator also illustrates the capacities to shape current and future structures of knowledge, innovation, production and technology.

Choke points are a prominent issue today in the global economy and shipment of goods. They especially contribute to their countries structural power – countries that control many choke points typically range higher in the overall ranking. Within the framework of the power indicator, the ability of the actors to block one or more of these passages differentiates. The ability to block one of the primary chokepoints weighs more heavily in terms of a negotiating option and thus of structural power than the potential blocking of one of the secondary passages.

A World Heritage Site is a landmark or area with legal protection by an international convention. The United Nations Educational, Scientific and Cultural Organization (UNESCO) has included sites of cultural, historical, scientific or other significance on its World Heritage List since 1978. Because these sites contain “cultural and natural heritage throughout the world considered to be of exceptional value to humanity,” they serve as a measure of a nation’s soft power. The number of World Heritage sites in a country is not only an indicator of the country’s attractiveness as a place to live for foreigners and for tourism, but also displays a country’s influence at the level of world cultural policy.

The Power Scores (PS) correspond with the average country shares of a particular year. By doing so, the Power Scores and thus Power Shift Rates are based on the model of relative “market” shares.

The Power Shift Rate (PSR) is the difference between the Power Scores of two points in time. This score illustrates whether a country lost or gained considering all indicators of our index.

In contrast to the relative Power Shift model, the rate of country change examines the development of the country figures without comparing them to the global total. This model reveals whether a country has experienced a positive or negative trend over the years.