Saudi Arabia: Stumbling at the Bottom 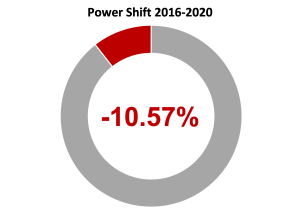 As already observed in the previous period from 2011 to 2015, Saudi Arabia again lost the largest Share of Power with an average Power Shift Rate of -0.21 between 2016 and 2020, ranking 17th considering the overall Power Shift Rate. On the whole, Saudi Arabia dropped down from 15th to 16th place in the BPSM-Power-Ranking in terms of overall Power Score throughout the period observed. Concerning the Country Change Indicator, Saudi Arabia comes in 5th place. The country’s specific development can be stated as positive (CC 12.63); however, Saudi Arabia’s relative values are below the average of the G19 states. In total, a downward trend can be observed in this respect, since the CC was higher in the previous period observed (2011-2015).

The overall decrease of power can mainly be traced back to losses in the sectors of Military Spending (from a CS of 3.66 in 2016 to a CC of 2.91 in 2020) and Total Reserves (from a CS of 4.43 in 2016 to a CS of 3.10 in 2020), both categories that have been of significant importance to Saudi Arabia’s traditional hard power so far. With regard to the indicator of Total Reserves, Saudi Arabia can be pointed out as the worst performer of all G19 states in this sector showing both, the highest absolute decline in regarding its own reserves and the second highest compared to the other countries observed.

The observed downward trend continues with regard to indicator of UNESCO World Heritage Sites. With the Al-Ahsa Oasis, listed in 2018, Saudi Arabia only gained one new site, now counting five, and is therefore tied for last in this aspect, showing the fewest total amount of UNESCO World Heritages of all G19 members. Looking at the indicator of Top Companies, no change can be observed: Saudi Arabia still lists one company in the Forbes 500. At last, Saudi Arabia managed to add one new top University to the QS 200, now counting two while doubling its Country Share from 0.5 in 2016 to 1 in 2020 in this sector.

Overall, Saudi Arabia clearly struggles at the bottom of the G19 states with losses in terms of Country Share in the sectors of Military Spending, Total Reserves, Exports and GDP (PPP). The country’s only Pillars of Success include the indicators of UNESCO World Heritage and Top University. However, despite showing a positive trend in these two sectors, Saudi Arabia still remains a tail lamp in this respect. 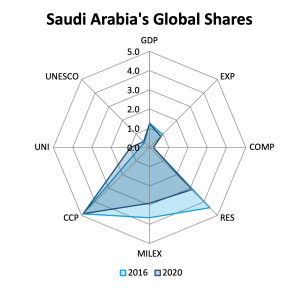