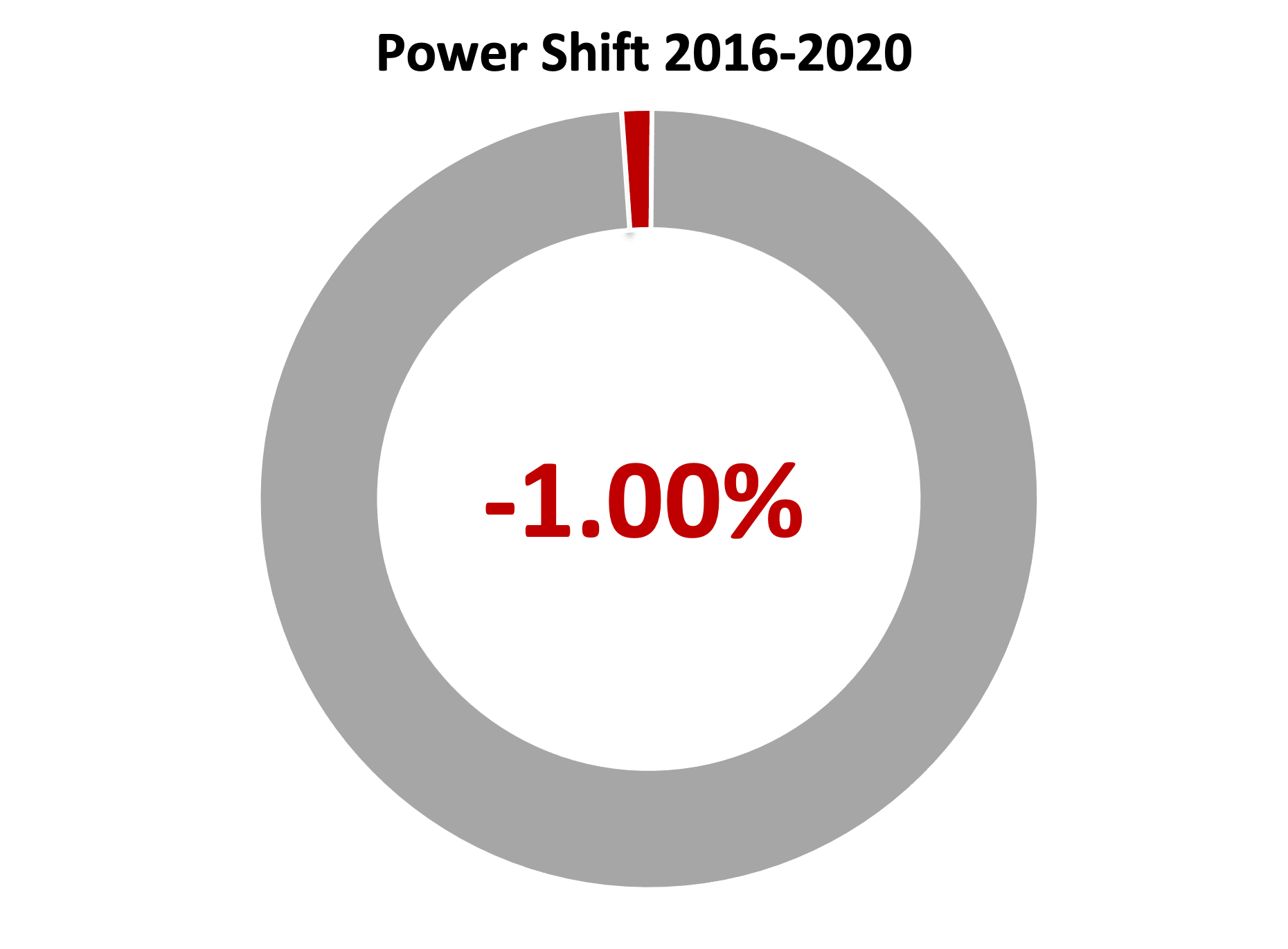 As the biggest country by territory in the world and remembering its former superpower status, the Russian Federation set its own aspirations high – not to say global. Based on a period of remarkably huge growth in the 2000s, Russia is currently lagging behind its ambitions due to economic hardship and diplomatic tensions. After the conflicts in Georgia, Ukraine and Syria, Russia now reached a new level of conflict with the invasion of Ukraine in February 2022. The military offensive in Ukraine and Russia’s resulting isolation due to the West’s far-reaching economic sanctions are weakening Russia. The final effects of the war, however, will only become apparent in the coming years. Formerly, the conflicts were proof of Russian hard power and its ability to project its military might abroad; the current situation in Ukraine casts the Russian military in a different light.

Moscow experienced relative losses compared to the G19 countries for the latest period, with a Power Shift Rate of -0.03. In comparison, Russia has thus lost 1.02 percent of its power since 2016. However, the absolute power development of Russia has further increased, with a Country Change rate of 8,02. Showing a Power Score of 2.82 in 2020, it is the 8th strongest nation of the G19 member states. Taking a closer look, however, its develop-ment takes quite a discontinuous path with volatile Power Scores.

Turning to the Soft Power indicators first. As for Russia’s power in science, the number of renowned universities is stagnating at one: The Moscow State University. This indicates that Russia’s knowledge society is at risk to fall behind the accelerated tempo of education around the globe. In 2016, Russia presented five companies among the global 500-elite, however, over the last four years, Moscow lost another company, now remaining at only four.

First, the Landscapes of Dauria, a region east of Lake Baikal containing different steppe ecosystems, forests, and grasslands, as well as wetlands and lakes. Second, the Assumption Cathedral and Monastery of the town-island of Sviyazhsk. The city island is located at the confluence of the Volga, Sviyaga and Shchuka rivers. It was founded in 1551 by Ivan the Terrible. Its strategic location at a crossroads of the Volga route and the Silk Road made it the first outpost for Ivan’s conquest of the Khanate of Kazan. The cathedral and monastery complex were built in the 16th century and renovated in the 18th century. The frescoes in the cathedral are among the best examples of Russian Orthodox painting and are painted in a unique blend of styles from different regions of Russia. In 2019, in addition, the churches of the Pskov School of Architecture were included as a World Heritage Site. This site includes ten churches or monasteries and associated buildings in the city of Pskov. They represent the work of the Pskov School, which drew from the Byzantine and Novgorod traditions, fused them with local folk traditions, and adapted architecture to the use of local resources. The churches date from the 12th to the early 17th centuries, with the peak of this style in the 15th and 16th centuries.

Now turning to the typical hard power indicators, starting with the new Chokepoint indicator.  In 2020, as in 2016, Russia controlled 8 of the world‘s chokepoints. The Chokepoint indicator was constant for the last period, this could change if control capacities change.

Generally, it is unlikely, since chokepoints are geographically anchored, and large boundary shifts are improbable. However, the Russian war in Ukraine could bring about change: the Kerch Strait is a chokepoint in Ukraine that connects the Black Sea with the Sea of Azov. Currently, Russia controls Crimea and the surrounding areas and aims to establish a land bridge between Donbass and Crimea in order to gain access to the Black Sea. It therefore remains to be seen, how the situation between Russia and Ukraine will develop and how long Russia will retain control over the temporarily occupied territories.

In the economic sense, the Russian hard power presents a mixed picture. In the macroeconomic categories considered by the Monitor, Russia slightly gained in the GDP category since 2016 (ICR +16,78; MC +0,06). Focusing on the Exports of Goods in Services. Russia comes in fifth in the Asian region comparison with a CS of 1,69%, therefore showing a slight increase since 2016. In comparison to the other G19 states Russia takes 12th place. Regarding its defence spending, Russia shows a negative Indicator Change Rate between 2016 and 2020 (-16,48). It comes in fourth place behind China, the US and India with a CS of 3,50%. Turning to the Total Reserves indicator, Russia comes in fourth, just behind China, the US and Japan with a CS of 3,92%. Looking at the Indicator Change Rate, Russia takes second place behind India (ICR +58,27).

Over the period of observation, Russia increased its hard power in numbers and also proved a willingness to project this power in foreign affairs. The Russian invasion of Ukraine in February 2022, however will cause drastic changes in the development of Russian power. First, economically due to the imposed sanctions by the West (China’s role still unclear) and second, militarily due to the loss of military power and troops in the Ukrainian-Russian War. 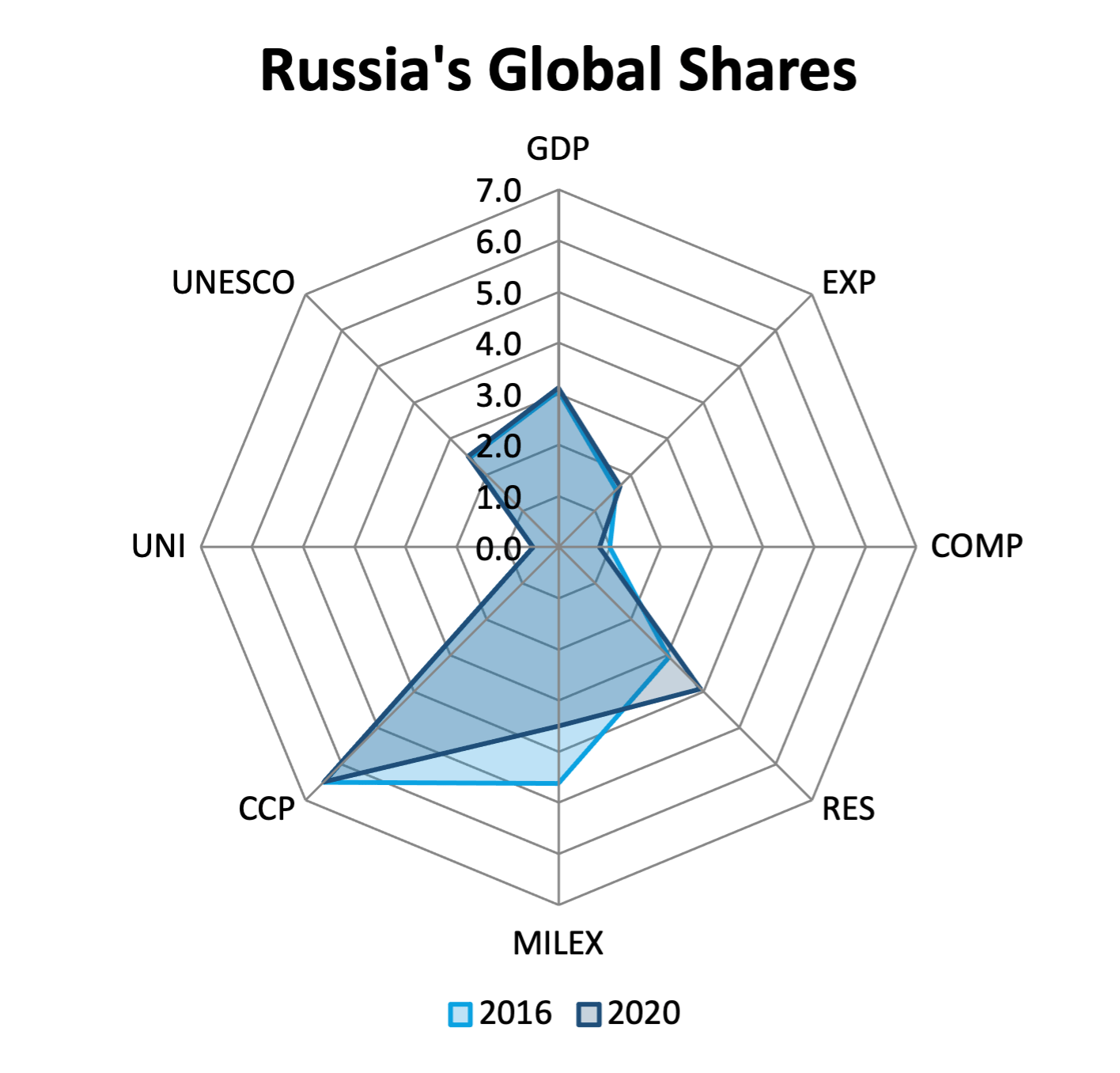