Argentina: Stuck at the bottom

Argentina and South Africa remain the bottom performers in the BPSM. The Power Share of both countries has dropped slightly since the 2019 BPSM-update, leaving them as the weakest members of the G19 states with a Power Score of 0.46 each. With a decreasing Country Change Rate of -0.21, Argentina has been unable to pave its way up the ranking and rather seems to be stagnating with a slightly negative trend in terms of its internal country specific development. Furthermore, with an average Power Shift Rate of -0.025, Argentina registered one of the worst percentage declines in terms of general Power Share compared to other members of the G19. 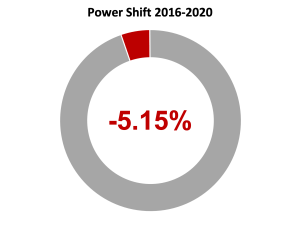 Turning to the indicators, Argentina only gained in the dimension of UNESCO World Heritage Sites with a new site – the Los Alerces National Park – registered in 2017. This still leaves Argentina tied for last, as every G19 country has gained at least one site. Considering the indicator of Chokepoints Argentina comes in last again, controlling only one, the Strait of Magellan. Furthermore, Argentina does not host any Fortune 500 enterprises, which underscores a micro-structural power lack. Likewise, Argentina had the lowest military spending of all G19 countries, showing a decrease in Country Share from 0.20% in 2016 to 0.16% in 2020. But also with regard to the dimension of GDP (PPP), Argentina continues to struggle at the bottom coming in penultimate behind Australia and only ahead of South Africa, while showing less increase in this sector compared to the G19-average with a Country Share of 0.71% in 2020.

Taking a look at the indicator of Exports, Argentina turns out to hold the smallest absolute export volume of the G19 members in 2020. This is mainly due to a slight decrease in total exports, which led to the worst percentage change of all G19 states in terms of Country Share in the Export sector with an Indicator Change Rate of -10.09%.
Moreover, Argentina held the fewest absolute Reserves throughout the whole period, which, despite showing a minimal absolute increase, led to a decline in Country Share due to Argentina’s performance below the average. Last but not least, considering the indicator of Top Universities, the Universidad de Buenos Aires remained the only Argentinian University in the Top 200 between 2016 and 2020. As a result, the indicator stayed constant for the regional power from South America.
In general, it can be said that Argentina’s Power Shift continues to decrease for the most parts of the revisited indicators. Especially with regard to the sectors of Exports, GDP (PPP), Military Spending and Reserves, significant losses could be observed.

In general, it can be said that Argentina’s Power Shift continues to decrease for the most parts of the revisited indicators. Especially with regard to the sectors of Exports, GDP (PPP), Military Spending and Reserves, significant losses could be observed. 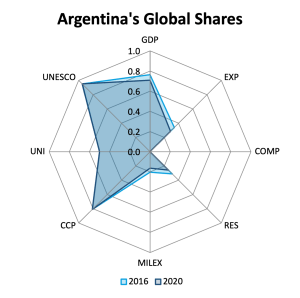