After the United States, Japan is the second biggest power loser in the period from 2005 to 2017. With a Power Shift Rate of -1.82, the Land of the Rising Sun is clearly performing worse than the third-last country France (PSR -0.99) but still definitely better than the biggest loser USA (PSR -4.29). 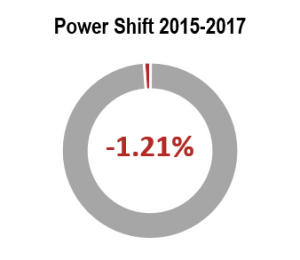 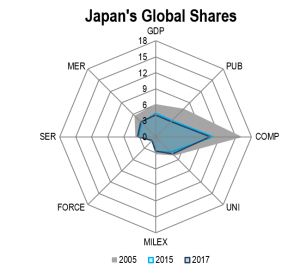 In the most recent period of observation, from 2015 to 2017, Japan has lost country shares in the categories GDP (PPP), military expenditure, top companies, and publications. In all of these areas except GDP, Japan has also lost in absolute figures. The reason for that has been three companies falling out of the Fortune 500, lower military spending (Indicator Change Rate [ICR] -0.53 percent) and a decrease in the number of publications (ICR -2.38 percent). Despite these losses, Japan records the third most companies after China and the USA in the G20 ranking in 2017.
There were no changes in the segment of the armed forces, where absolute figures rose slightly by 0.46 percent, but its global shares remained at 0.95 percent, with which Japan maintains its image as civil power. In the sectors merchandise exports, service exports, and universities, Japan could increase its country shares. The absolute development mirrors this trend, since merchandise exports rose by 11.74 percent, service exports by 14.55 percent and Japan listed another university among the top 200 in 2017 compared to 2015.

However, these positive values could not prevent Japan’s Power Score from falling by 1.2 percent from 2015 to 2017. Although Japan is still one of the losers, its losses are smaller than those of seven other G20 countries such as the USA (PSR -0.48 percent), Great Britain (PSR -0.41 percent) or Saudi Arabia (PSR -0.14 percent). To sum up, Japan´s power shares continue to de-cline, but the negative trend has slowed sharply.

Becoming the Land of the Setting Sun? 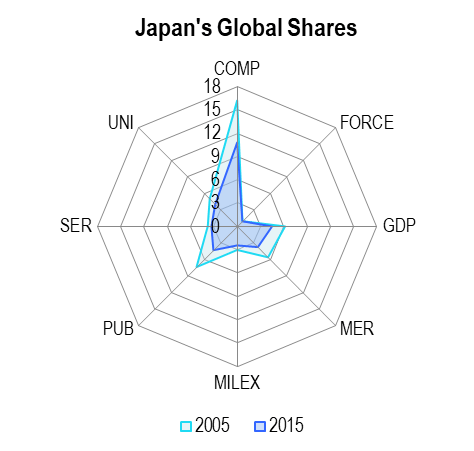 Japan is already known for its long period of economic stagnation, so that the past two decades since the 1990s are referred to as the “Lost 20 Years”.[1] Immediately after modest economic revitalization in the 2000s, the triple disaster in Fukushima Daiichi on 11 March 2011 had huge impact on Japans economy. The cataclysmic effects are also revealed by the BPSM, finding that Japan’s power has declined in every single category. The greatest downturn is recorded for leading companies as Japan has lost one third of its global share. For its decline in the 2005 to 2015 period, Japan receives a Power Shift Rate of -1.76, which is in fact is second greatest loss in the ranking. With this 29.2 percent decreased power, Japan loses its status as the third strongest nation among the G20. Nevertheless, being on rank 5, Japan proves great resilience even in the face of crisis.

Although Japan experienced a period of stagnation, it still is one of the biggest players on the global market. Japan has lost some weight in the categories GDP, merchandise and service exports as visible in the chart on the right, but remains the fourth largest economy in the world. While other countries outpaced Japan’s economic development, its positive domestic trend in these categories indicates lasting prosperity. That does not mean that Japan can ultimately defend its favorable position as its service export volume was for example surpassed by China in 2011. Hence, Japan is no longer the fifth largest service exporter, but the sixth largest among the G20 in 2015.

Turning to merchandise exports, China even surpassed Japan’s level before 2005. Nevertheless, Japan is an export dependent economy mainly trading cars, vehicle parts and electrical goods.[2] This is also reflected by its most valuable companies. In 2015, 16 of 54 Japanese companies listed among the Fortune 500 operated in the Motor, Vehicles and the Electronic industry. Japan’s wealthiest firm is Toyota, the world’s market leader in sales of hybrid electric vehicles highlighting its innovative capabilities in the globalized knowledge economy. Though Japan is a global technology leader and its business sector is one of the world’s most research-intensive, the BPSM notes that the country loses competitive power.[3] For illustration, between 2005 and 2015, 27 Japanese companies were struck off the Fortune 500 list. This is indeed the greatest drawback on Japan’s negative BPSM score and only the United States lost more entries in this category over the review period. Conversely, China’s growing number of top companies has overtaken Japan in 2011 so that the island nation has been pushed down to the third rank of housing the most globally leading firms in the G20 member states. This again reflects Japan’s traditional great power capacities and their current demise.

Political actions are indispensable if Japan wants to stay at the global top as the BPSM also records waning academic capabilities. Compared to 2005, Japan lost two universities among the global 200 elite. However, with eight entries on the list the BPSM found one last category in which Japan is still ahead of China (7). Moreover, five Japanese universities are listed among the top-100 but only four Chinese and three South Korean are. This indicates the superior quality of Japanese elite universities und stresses the nation’s traditional knowledge power. 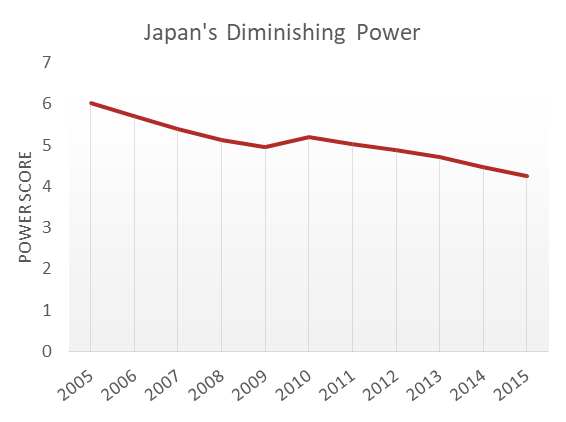 Its waning scientific power is, however, even more strongly emphasized by the publications indicator. Japan is the only country on the list that decreased its academic publication output in relative and absolute terms. While Japanese researchers published almost 110,000 publications in 2005, there were around 10,000 less in 2015. This decline of almost nine percent also means a loss of shares in the global knowledge economy (MC -3.07 percent). In 2005, Japan had the third largest academic publication volume in the world. In 2015, it is placed on rank 6 – overtaken by India, Germany and the United Kingdom. Particularly the rising number of Indian articles stresses the Japanese decline. Starting off from a contribution to the global volume of 2.2 percent in 2005, India strongly expanded its scientific footprint. In contrast to this, Japan presented a world share of more than seven percent in 2005, but fell to around 4.3 percent in 2015, so that it was overtaken by the rising nation in that year. As Indian researchers published more than 4.6 percent of the global total, India has taken Japan’s former rank as the third greatest knowledge producer among the G20 member states. In recent years, the government became more concerned about losing academic importance and initiated programs to improve the attractiveness of research careers, particularly for women. Cultural norms such s gender roles are, however, hard to change, but with Presidents Abe’s initiatives, first attempts have been made.

In spite of China’s rapid military build-up and the nuclear armament of North-Korea, Japan did neither raise its military expenditures (MILEX: MC -0.58; ICR -1.25) nor its amount of troops (FORCE: MC -0.01; ICR -4.49). The almost steady figures indicate that Japan does not strive for a military buildup despite the tense situation in the Asia-Pacific region. The military budget is traditionally held at around one percent of GDP which is also visible in the 2005 to 2015 measure. The BPSM records slightly falling expenditures until 2008, followed by an unsteady increase almost to the original level. This should not be confused with great fluctuations, as the ratio stays at around the mentioned level over the whole period. While the official one percent limit was already abolished in the late 1980s, defense expenditures tended to stay around this level. However, President Abe declared to prioritize the requirements of the security situation instead of the one-percent-norm – already visible in rising expenditures over the last years. Nevertheless, the moderate line of Japan’s recent upturn in military expenditures is particularly visible in comparison to the buildup of Saudi Arabia, Russia and India. While Japan was the fifth largest military spender among the G20 in 2005, all three of these countries managed to overtake its volume and push Japan down to position eight in 2018. In contrast to this, Berlin and Tokyo presented similar budgets over the whole review period. In view of the rising military expenditures of South Korea, it seems likely that both traditional powers will be surpassed over the next years.

Traditionally, Japan focused on a defensive military policy as it is even enshrined in its 1946 constitution that it renounced to maintain armed troops and the use of force as means of settling international disputes.[4] Nevertheless, Japan maintains the “Japanese Self-Defense Forces” (JSDF) and formally established a Ministry of Defense in 2007 which signals an increasing orientation towards “normalization” in foreign affairs. Nevertheless, the Japanese army belongs to the smallest in the Asian-Pacific region. For comparison: The Japanese force personnel were about tenfold smaller than China’s army (2.8M) and almost three times smaller than the South-Korean forces (634,500) in 2015. This in turn stresses the importance of the United States as Japan’s traditional ally.

A Global Player in Need

The BPSM reveals that Tokyo’s power has strongly declined in the 2005 to 2015 decade losing almost one third of its power base. Internal challenges such as demographic issues, persistent gender roles and a sluggish economy contradict with global prominence in politics and products. The Japanese government has, nevertheless, recognized that it needs to countervail its losing touch with the emerging states while it still holds a  favorable position in the international system. Therefore, the government sets sails to diversify the economy and strengthen the strategic partnership e.g. with the EU-Japan Free Trade Agreement. It should not be forgotten that Japan is still a global leader in economic and scientific terms and the fifth most powerful nation according to our ranking of the G20 states. If Japan does not want to become the “Land of the Setting Sun”, it has to remember the origins of its strength: its highly-qualified and resilient population demanding new opportunities to prove itself and strong multilateralism.

The Constitution of Japan (2018). Retrieved from Prime Minister of Japan and His Cabinet: https://japan.kantei.go.jp/constitution_and_government_of_japan/constitution_e.html