Italy: There’s Life in the Old Dog Yet 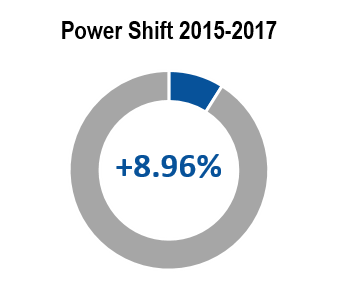 Italy is among the most surprising countries of the 2015/17 phase: For the first time, Rome has not lost but actually gained power internationally over a two-year period of time. Since 2005, the Bonn Power Shift Monitor recorded an irregular, but on aver-age negative development of the Italian Power Score. With this nine percent increase of power, Italy has recovered to its 2011-level now. The Power Shift Rate for the 2015/2017 period is as much as 0.16, which makes Italy the third biggest power winner of the period, and lets it climb up our Power Score ranking by one position, now being on place 10 out of 19, ahead of Canada. This striking development is even more apparent if you take a look at the absolute figures: Italy receives a Country Change Rate of 40.99 for the latest phase, meaning it is by far the biggest winner of the period in absolute terms. 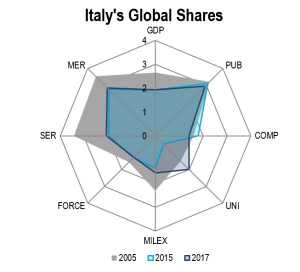 But what are the main drivers of this immense comeback? Having a look at the development of the categories, one area stands out the most: the indicator of top universities. While in 2014 Italy had only one university among the top-rated, it now hosts four, which is an absolute increase of 300 percent, and a relative in-crease of 1.50 (Market Change). Since the other categories with a positive figure grew only moderately in comparison to that, it can be said that Italy´s comeback is mainly due to this success in the world of science.
Nevertheless, increases in military spending and higher numbers in merchandise and service exports contributed to this up-swing as well. Especially the positive development of military spending is remarkable since Italy had been losing power, both absolutely and relatively, in this category since the period of 2009/11. Together with a substantial absolute growth of the GDP (Indicator Change Rate: +10.90), this indicates that Italy´s economy and finances slowly leave a phase of losses, budget cuts, and stagnation. 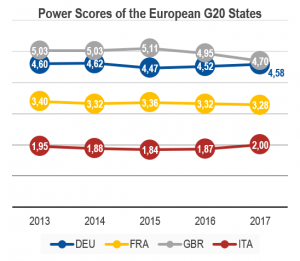 So is Italy on its way to compete for the power ranks of other European G20 countries? Two facts should be considered concerning this question: First, Italy´s top-ranked universities are all to be found at the lower end of the ranking, with the highest-ranking one being on place 156 out of 200. Keeping in mind that the factor of universities was the main reason for Italy´s surprising success and that there is usually much dynamic at the lower end of this ranking, it is all but uncertain whether Italy can uphold its power boost. Second, the rise of two parties, the Five Star Movement and especially the Lega with its prominent leader Matteo Salvini, caused much political dynamic in the country, making the future course of Rome and the country hard to predict. So even though Italy achieved an impressive success during the latest period under examination, it remains to be seen whether Rome will continue to win power in the years to come.

Italy: The Boot that lost its Heel

The “Boot”, as Italy is called due to its unique geographic shape, has a central footprint in western culture and is one of the founding members of the European Union. Since 2008, Italy is struggling with the repercussions of the global financial crisis – in this case particularly referred to as the Euro crisis. The Bonn Power Shift Monitor reveals that Italy has indeed lost a middle power competition to South Korea, Russia and Canada, pushing Rome from place 8 to 11 ranking the individual G20 states’ power sum. This is also reflected by the correspondent BPSM score of 2.5 in 2005 and 1.86 in 2015. Therefore, Italy receives a Power Shift Rate of -0.64, which means a loss of 25.6 percent in the country’s original power base and marks the third steepest decline in the ranking. To illustrate: In seven out of eight BPSM indicators Italy has lost global market shares as visible in the chart on the right. The only positive exception is the category of globally leading companies. In 2015, Italy records nine entries on the Fortune 500 list – one more than 2005 – which could nonetheless not offset its demise in power.

Left Behind by the Pace of Globalization

Taking a look at Italy’s domestic change, its weak country change rate indicates that the country has not only lost international weight, but also internal vigor. It has indeed the weakest development sum in the 2005-2015 review period with +0.79 (CC), which signals that the country’s development has generally stagnated. Its rate is even worse than that of larger power losers on the list, namely Japan and the United States. With this, Italy is the least powerful European state among the individual G20 states as well as the least dynamic and largest power loser. In contrast to the view that its declined global share is largely owed to the Euro-crisis, the BPSM records already falling shares in GDP, merchandise and service exports and defense budget before the crisis struck. Thus, already before the crisis, Italy struggled with keeping up with the pace of globalization which eroded its status as a great power. 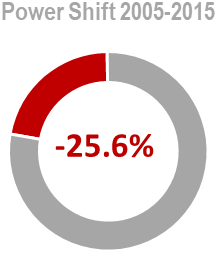 The economic categories indeed have the largest impact on Italy’s negative Power Shift Rate have, closely followed by declining military hard power. Yet in contrast to the latter, all economic categories present positive country rates but negative international sums. This indicates that while Italy has recuperated from the crisis impact by its own standards, it lagged behind the progress of rising economies and certain traditional powers which consequently translates into declining importance in a global measure. Italy’s GDP (PPP) rose in absolute terms from $1.7 trillion in 2005 to $2.2 trillion in 2015 making it the 11th wealthiest among the individual G20 states. In relative terms, the increase of 30 percent is not even half the world’s average growth rate. Moreover, only Japan presents less progress during the review period which underscores the weak energy of the Italian economy. To illustrate: Italy’s share in world GDP (PPP) fell from 2.65 percent in 2005 to 1.96 percent in 2015. Within this category, South Korea and Canada, who surpass Italy’s overall Power Score, are still about 30 percent below Italy’s level of wealth by GDP (PPP) reflecting the country’s original status as a major advanced country.

The impact of the Euro crisis on Italy’s economy is best illustrated by its exports volume in both commodities and services. Between 2005 and 2008, Italy’s merchandise export volume grew by 69 percent, then it slumped by 75 percent within just a year. Since then, Italy’s commodity trade did not recuperate to its highpoint of 2008 ($542.7 billion). Although the overall progress (ICR +22.5) is below the world average (+56.7), it is still positive and higher than Canada’s, Saudi Arabia’s, France’s, and Japan’s. In effect, Italy’s trade volume by merchandise exports was only overtaken by South Korea, which has stepped up its commodity trade by more than three-fourths since 2005.

A similar pattern is recorded for Italy’s service export volume which is the category that contributes the most to Italy’s negative power shift (MC -1.42; ICR +6.69). The Monitor records the by far lowest internal progress on the list, followed by Saudi Arabia with an almost four times higher service trade growth. Furthermore, Italy’s service volume was surpassed by China in 2007 and by India in 2010, pushing Rome down as the eighth instead of sixth largest service exporter among the G20. This place is already challenged by South Korea that boosted its trade
over the period under review and is almost on par with the Italian level in 2015. It seems that Rome is losing competition in this area against its emerging Asian rivals. The category is of particular importance to Italy’s national wealth and global status: 70 percent of the Italian employees work in the service sector, and they produce about 75 percent of the country’s GDP.[1] In addition, seven out of the nine Italian companies on the Fortune 500 list belong to the financial service sector signaling Italy’s structural leverage as a global hub.

Contrasting the perception of a broad-based waning competitiveness, Italy presented nine entries among the global Fortune 500 in 2015 – one more than 2005. The most valuable company is called EXOR Group[2], a holding company whose principal investments include Fiat Chrysler Automobiles and Ferrari – which foster Italy’s soft power as famous brands around the globe. ENI, a petroleum refining business, is the second most valuable company. The Italian government owns a 30 percent stake in the company, which profits from unique access to oil fields in the Middle East and North Africa and thus delivers a special influence in global affairs. Yet the plus in global businesses cannot offset the negative rates of other BPSM categories.

In 2005, there were three Italian universities among the global 200 top. Then, alternately one or two universities were listed. Since 2014 only the Polytechnic University of Milan was ranked among the leading 200, which results in a negative rating for this category. In comparison to its European partners, Italy has by far the least world-class universities. Indeed, Germany (2015: 11) and United Kingdom (30) even improved their shares. Furthermore, South Korea, who also started with three entries on the ranking, presents seven top universities in 2015 and has thus clearly overtaken Rome as a knowledge hub.

In contrast to this, Italy’s academic publications in 2015 (70,814 articles) are still ahead of South Korea (64,523) and Canada (60,496) who both had surpassed its aggregated power level. In this category, Italy presents a positive trend in absolute numbers, only slightly behind the global trend that points to a key strength in qualified researchers (PUB: MC -0.13; ICR +49.53). Italy’s output can also compete with other Europeans as it is almost on a par with France (72,224), whose publications rate has been declining since 2013. To counter its waning scientific influence, Rome made significant efforts to support the doctoral education focusing on stimulating the research environment, collaborative doctorates and internationalization.[3]

In 2005, the suspension of compulsory service was paralleled by the introduction of a new type of voluntary military service. As a consequence, this policy contributed to the fourth highest loss of armed troops in the 2005-2015 BPSM review. Only China, Germany and the United Kingdom have scaled down their troops more. Therefore, Italy had still the largest armed troops among the European individual G20 states in 2015, but one should notice that at least about one third of the troops serve as Carabinieri, a special armed police. Reinforcing the impression of downscaled hard power attention, Italy also presents the biggest relative decline of military expenditures in contrast to a global upward trend. Italy decreased its defense budget by approximately $1 billion per year during the research period. To compare: The UK, whose force personnel size is about half of Italy’s over the review period, almost spends twice as much each year. Furthermore, Russia’s military expenditures, which were below Italy’s in 2005, are about $41.1 billion ahead in 2015. In this category, its power competitor South Korea surpassed Rome’s defense spending in 2011 and has widened the gap significantly ever since.

The Bonn Power Shift Monitor finds that Italy has performed much weaker than the global  average, particularly than its European G20 partners over the years under review. As a result, the Power Score gap to UK, Germany and France has widened, leaving Italy with reduced influence in global affairs. This has struck Italy even as the only European country from the ten strongest individual members of the G20. Even though the BPSM records strong declines in hard power capacities as major reasons for Italy’s power loss, it performs fairly well in structural and soft power related categories. In sum, the rise of Russia, Canada and South Korea as well as its degradation from the top 10 in the G20 in GDP, military expenditures and world-class universities imply that Italy is losing its traditional Great Power status in global affairs.