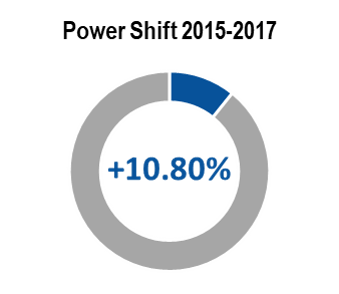 During this time, the world´s second-most populous country has gained country shares in all categories except Fortune 500 companies. In this category, it has been keeping seven firms on the list since 2015 and therefore has held its country shares stable at 1.40 percent. In absolute terms, India has also recorded growth in all categories and has achieved the third highest Rate of Country Change of 18.41 percent over said period. 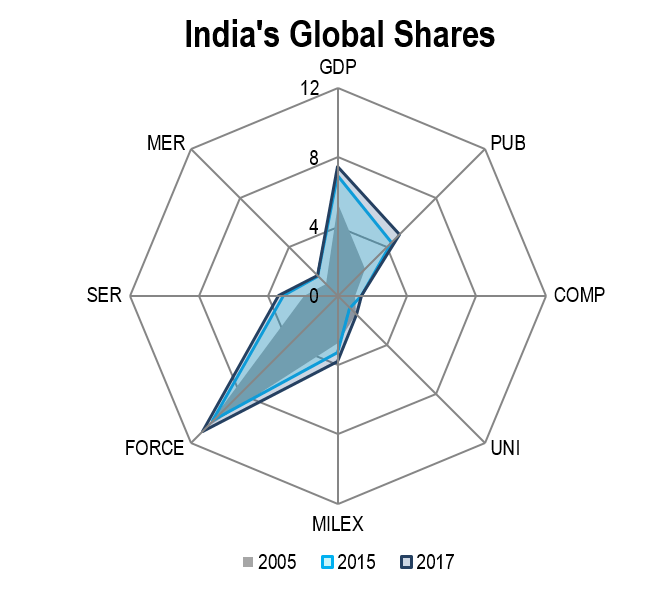 The smallest relative increase has been in merchandise exports, from 1.61 percent in 2015 to 1.68 percent in 2017. The greatest profits have been made in armed forces, where the country shares have risen from 10.20 to 11.06 percent. This trend is opposite to the 2005 to 2015 period. Within these five years, the country shares shrunk by 0.48 percent for this indicator. Interestingly, this category shows the smallest increase in absolute figures in the 2015 to 2017 period, with an Indicator Change Rate (ICR) of 8.3 percent. 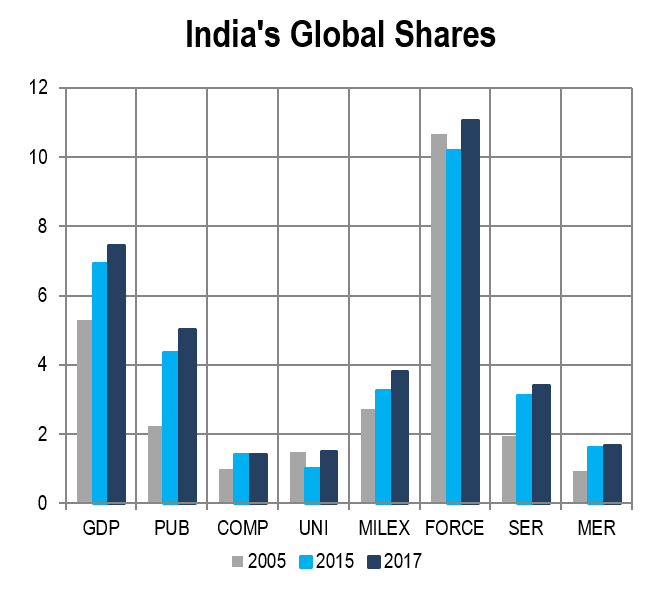 All in all, India continues to rise to the top and chases the current top four among the G20. Its growth is distributed almost equally among the individual categories. The country of 1.36 billion people thus has the potential to rise even further on the global stage within the next years. 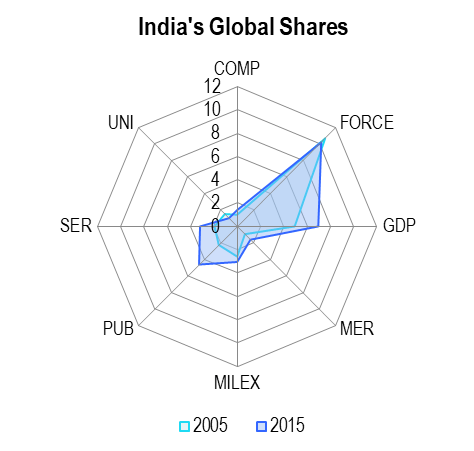 India has stepped up to the world stage in the past quarter of a century. The Bonn Power Shift Monitor highlights that the Asian elephant has gained enormous weight – even if only the 2005 to 2015 period is reviewed. For these years, India shows the second highest power gains after China, though the Power Shift Rate of +0.78 remains significantly lower than that of its northern neighbor. By enlarging its power base by +24 percent to a Power Score of 4.0, India has replaced France on sixth rank by aggregate power in the G20. As it greatly enlarged its power base, India can now meet the traditional global players on an equal footing and seems to evolve into a great power in international affairs. Its power enlargement is both related to its unfolding economy (e.g. GDP) as well as human capital (e.g. scientific publications). As the latter shows an even greater upswing than the former, India has evolved as knowledge producer that competes with the traditional Western science hubs instead of being a mere receiver.

Land of Diversity and Extremes

Since India has reformed and opened up its economy in the 1990s, it has become one of the fastest growing major economies in the world. In the 2005 to 2015 period alone, the country’s GDP (PPP) has grown almost twice as fast as the world’s average, making it the third largest economy after China and the USA. Nevertheless, India is not accepted as a member of the G-7 club of major economies.

This fast growth is also visible in the export categories: India tripled its service trade and more than doubled its merchandise exports over the observation period. The numbers thus indicate not only a fast growing Indian consumer class, but also an increasingly vital labor force that becomes a global hub for manufacturing goods. Its young and low-cost working force is a special advantage providing long-term prospects for growth in contrast to the aging western populations.[1] 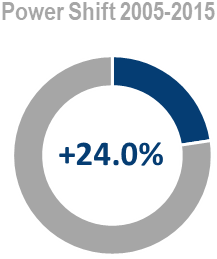 Yet poverty remains a major issue and a signal for lacking infrastructure, high internal market barriers and little education opportunities which keeps the country from being accepted on the same level by traditional powers. Prime Minister Modi already implemented several counter-measures, among them a goods and service tax reform and a reduction of tariffs that have to be paid at the internal state borders.[2] Such steps are necessary as domestic complexity restrains economic growth, particularly concerning the expansion of Indian companies.

Between 2005 and 2015, the number of Indian companies among the Fortune 500 has increased from five to seven. Five out of these seven operate in the oil sector reflecting India’s rich natural resources. However, India heavily relies on oil imports (it imports around 80 percent of its oil) as its consumption is booming and its production capacities are focused on petroleum products for which India has become an exporting nation.[3] Moreover, this plus in large-scale firms cannot compete with the level of its Asian neighbors in the G20. In 2015, South Korea hosted 17, Japan 54 and China 98 of the global top 500. Only Brazil presented the same number of large businesses in 2015, though it started off the review period with only three entries on the list, unlike India with five entries.

The internal challenges also indicate the need to promote inclusive and sustainable development. Innovation and inclusion are perceived keys to India’s socioeconomic development and have a common denominator: education.[4] Yet in this domain, the BPSM finds mixed results. On the plus side, India has more than tripled its publications output. This is also the category in which it gained the most global shares. In absolute terms, India published the third most scientific articles in 2015, staying only behind the United States and China, but surpassed the output of Japan, the UK, Germany, France, Italy and Canada since 2005. In relative terms however, it has a weaker publication record in leading academic journals than Brazil, China or South Africa, according to the OECD.[5]

The large increase in publication numbers can be related to unfolding scientific abilities of the Indian population due to rising numbers in tertiary students. Apart from that, Indian universities hardly reach the global elite level. In 2015, India had only two universities among the leading top 200 which were the Indian Institute of Science and the Indian Institute of Technology Delhi (IITD) – hence losing one place on the list since 2005. Only Brazil presented the same number of entries in 2015, but in contrast to India, the Latin American riser increased this number by one since 2005. Though other G20 countries such as Indonesia house less or no top-universities, the Indian figures still point at a lost opportunity for upgrading scientific facilities. In recent years, the government has recognized this structural weakness. It initiated policies giving priority to developing human capabilities particularly in terms of education quality whose impact still needs to be shown. 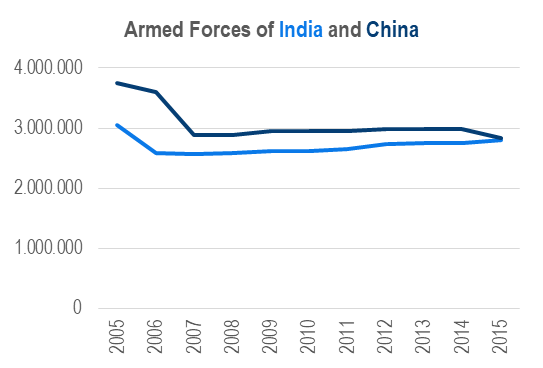 In the past, India has accomplished an enormous military buildup. Commanding almost 2.8 million armed troops in 2015, India commands the second largest force personnel in the world despite a reduction of almost a quarter million compared to its 2005 manpower. Even with such an eight percent reduction, India alone accounts for more than 10 percent of the global armed troops. In addition to the loss of one top-rated university since 2005, the force personnel are the only other category that reduces India’s Power Shift Rating. While China still has the greatest troop size around the globe, the gap between the two countries has almost vanished due to China’s “quality over quantity”-modernization approach. In contrast to its northern neighbor, India more visibly deploys its troops abroad as it contributes more than twice as many UN peacekeepers than China and belongs to the largest contributors in the world, only outnumbered by Ethiopia and Bangladesh.

Similar to its northern neighbor, India has also significantly raised its military spending from $35.6 billion in 2005 to $51.3 billion in 2015, thus becoming the seventh largest military spender – with upward tendency (MILEX: MC + 0.46; ICR +44.18). Its upgrade with advanced defense technology, including nuclear weapons and a space program emphasize that India’s hard power needs to be taken seriously, though it is said to lack long-term strategic planning.[6]

The BPSM figures stress that India is successfully transforming into a global power surpassing traditional Western leaders such as France on its way to the top. Only in the categories of microeconomic hubs New Delhi lags behind. Here, it stays in the lower ranks among the G20 sharing the same level with Brazil. Yet regarding both leading universities and companies, Brazil proved to be more successful in fostering these drivers of innovation which hints at domestic constraints India needs to address to become a great power in all regards.

While the country still needs to develop its full potential, it has taken great steps forward which provided it with access to the table of global players. On this table, India’s main policy style concerns maintaining political independence and pursuing its own interests. For this reason, it shuns formal alliances as well as deepening existing partnerships and does not shy away from breaking global consensus in an increasingly confident manner. Though India does not yet push for a revisionist approach, it voices its interest to be included in global institutions such as the UN Security Council, the Asia-Pacific Economic Cooperation (APEC) or the Organization for Economic Cooperation and Development (OECD), in which it does not yet have formal membership. In view of its booming soft, hard and structural power capacities, India’s interests need to be taken seriously by traditional leading powers. The Asian elephant is increasingly demanding its due place among the leading powers. Prime Minister Modi’s vision for a “New India” does not only concern sustainable development for his country and its people, but also to be accepted as a truly global player by the established powers.[7]