During the most recent period examined by the Bonn Power Shift Monitor, Germany achieved a surprising success: For the first time since the period of 2005 – 2007, Berlin receives a positive Power Shift Rate (0.12). This increase in power was sufficient to let Germany climb up our Power Score ranking, being now on place four (before: five), thus surpassing Japan. From 2015 to 2017 alone, Germany’s power score recovered by 2.6 percent. Additionally, Germany also made substantial absolute gains, with a Country Change Rate of 6.84. 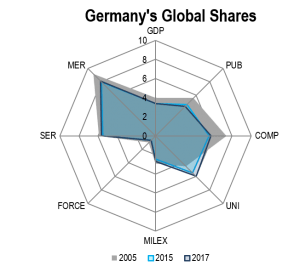 Having a look at the catego-ries, another interesting development can be observed: All indicators except for publications show a positive growth both absolutely and relatively (with the exception of GDP, where Germany could only make absolute gains) during the latest period. The biggest absolute gains can be found in the categories of GDP, service exports and military spending (all of them with Indicator Change Rates of about 10 – 11), while the biggest relative gains stem from the categories of universities (with an outstandingly strong Market Change of 0.50), military spending and companies.
As mentioned before, the only category with a negative trend between 2015 and 2017 is scientific publications. Germany’s absolute publication numbers have been relatively stable since 2012, whereas its global share is on an overall decline since 2005. This raises the question whether Germany has already reached its limits in scientific output. Interestingly, the UK and Japan, both tradi-tional powers in the international system present a similar picture so that the rising India managed to overtake all three of them by 2016 in this category. Although Germany shows a weakening picture regarding publications, it is still a globally leading location for science as indicated by the 12 top universities on the QS world university ranking. 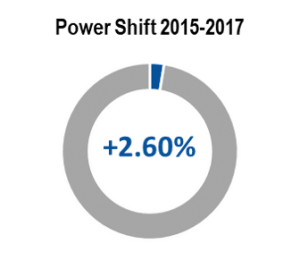 This marks a strong comeback compared to an overall power loss during the time of 2005 – 2015. However, it should be noted that Germany’s power development has been rather irregular since the beginning of the Power Shift observation period. Berlin often recorded power increases for a short time, only to endure substantial losses right after. Hence, it is uncertain whether Germany will be able to sustain the positive development of this period and whether it has the potential to climb up even further in our ranking of power. Christiane Heidbrink and Kai Beerlink take a closer look at Germany’s “Powerful Comeback” in issue 2/2019 of our Bonn Power Focus. 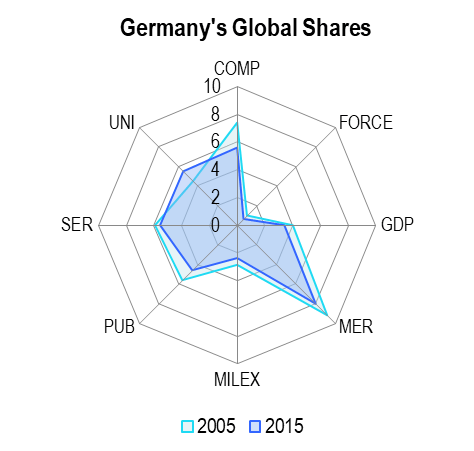 Germany is often perceived as one of the most powerful states in Europe. Based on the Bonn Power Shift Monitor, it is indeed the fourth most powerful country in the G20 after the United States, China and Great Britain. However, the Monitor also reveals that its Power Score has significantly declined over the last years affecting seven of the eight categories considered. Top-rated universities are the only positive category of the Monitor, but this positive mark could not compensate for Berlin’s losses in other BPSM categories. For its development in the 2005 to 2015 period, Germany thus receives a negative Power Shift Rate of -0.6 which downgrades the country among the power losers of the Monitor to rank 15 out of 19. This rate illustrates an overall decline of 11.9 percent in the country’s power.

The only category in which Germany managed to increase its global share is top-rated universities. Here, the number increased from nine in 2005 to eleven in 2015, among them e.g. the University of Bonn. Its high scientific reputation is particularly visible in this category as only the United States and Great Britain present more universities on global rankings than Germany. Due to its increase and other states’ losses in this category, Germany managed to surpass Australia, Japan and Canada over the review period which each possessed eight top-rated universities in 2015. Having the third most globally renowned universities among the individual G20 states thus points to a structural advantage in research and knowledge-production. This should not be confused with a leading edge, as the distance to higher ranked Great Britain (with 30 elite universities in 2015) remains remarkably vast. Having said that, housing eleven renowned educational hubs in contrast to one, like Italy, is still a notable plus for Germany’s soft and structural power.

The BPSM reveals that Germany’s leading edge on global markets has started to crumble. Considering the number of publications and top businesses, Germany has lost
significant shares over the last decade. While German scientists published almost 30 percent more articles in 2015 (105,754) than in 2005, the overall global share in publications declined as the increase did not keep pace with the global trend. Yet Germany does not stand alone with this challenge as a similar pattern is visible for traditional knowledge-producers like France and Great Britain. In this category Germany and Great Britain competed for the fourth place among the individual G20 states over the review period. Germany succeeded and even surpassed Japan in scientific publications, but as India has enormously increased its output, Germany finds itself behind the Eastern riser.

Turning to the world’s largest companies, there were 37 German corporations on the Fortune 500 list in 2005, but only 28 in 2015. This signals a loss of economic momentum and has the greatest impact on Germany’s negative power shift rating in the 2005-2015 balance. Though Germany achieved the sixth place among the G20 states, China and Great Britain managed to overtake Germany in this category. Furthermore, France continuously presents more Fortune 500 entries which very much relativizes the impression of a German structural edge.

This is furtherreinforced by other economic indicators like GDP and exports. The Monitor records decreasing international shares in service exports (-0.37 percentage points), merchandise exports (-1.18 percentage points) and GDP (-0.61 percentage points) – thus confirming that the German economy lags (at least relative to other countries) behind the pace of globalization. This affects Germany’s leading position particularly compared to emerging economies as it has already started to shift downwards, although the European power still belongs to the top performers in the world. For example, Germany was the merchandise export powerhouse in 2005, but was surpassed by China (in 2009) and the United States (in 2010).

In absolute terms, however, the country has experienced an overall positive trend. It managed to bring down high unemployment rates with the “Agenda 2010”-reform of previous chancellor Gerhard Schröder and even compensated the global financial crisis better than most of its European neighbors. The economy shows healthy growth rates, which are the highest for GDP, merchandise exports and service exports among the European individual G20 states, though these are by far smaller than those of rising economies like China or Korea. As Germany’s power is largely dependent on its economic weight, especially in regards to exports, the catching up of foreign competitors challenges all faces of Berlin’s power.

The military categories of the BPSM reveal a striking decrease in hard power capacities between 2005 and 2015. Germany lost global shares in both military spending (-0.49 percentage points) and force personnel (-0.35 percentage points). While the absolute figures reveal an increase in military budgets of 1.47 percent, the number of armed troops were reduced by more than two thirds.

Due to its militant past of the Nazi regime, Germany has developed the self-conception of a ‘civilian power’. Though this should not be misunderstood as pacifism, the use of force remains a tool of last resort instead of a typical foreign policy instrument. Therefore, military capabilities are usually not even second order when it comes to the pursuit of national interest or discussions about German power. Underinvestment in the Bundeswehr culminated in the 2010 realignment reform that cut spending and military personnel. Since the 2014 NATO summit in Wales, however, there is an increasing awareness that the German forces are falling behind the demands of the alliance. This increased international pressure on Berlin that gradually revised its defense policy aiming at higher expenditures and the recruitment of more military staff. Still, the numbers of 2015 and the annual reports of the Parliamentary Commissioner for the Armed Forces (Wehrbeauftragter) underline that Germany does not step up to its promises.

In comparison to its allies e.g. France, the German defense numbers and trends underline its dependence on the alliance as well as its military backlog. Among the European countries, Germany has only higher military investments than Italy, whereas the later commands more forces.

Powerful but falling behind

Summing up, Germany still belongs to the world’s leading powers. The Power Score of the country, deriving from the market shares of the categories in the model, was always among the five most powerful G20-countries over the period of observation. Yet, the scores reveal an overall decline in Germany’s power base which may eventually result in a loss of political influence on the global stage. 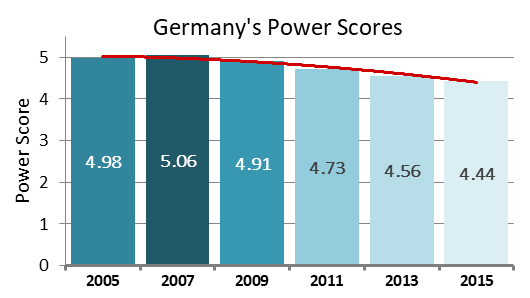 aking a closer look at the power shifts in the last decade, Germany was among the four largest power losers of the G20 countries since 2009. In the first years of observation from 2005 to 2007, Germany managed to increase its power on the global market, indicated by a positive Power Shift Rate of 0.8 for these years. When the global financial crisis hit in 2007, the country’s favorable economic situation was challenged. Even though this is only one factor related to the declining power shares, it affected all European G20-countries studied by the Power Shift Monitor. The European powerhouse still has structural advantages in innovative capabilities and economic regards, although it also suffered from the rising pressure of the unfolding economies in the east. Therefore, though Germany remains on the global top, the ongoing erosion of its dominant position underlines that strategic challenges, particularly regarding innovation and defense strategy, need to be addressed.