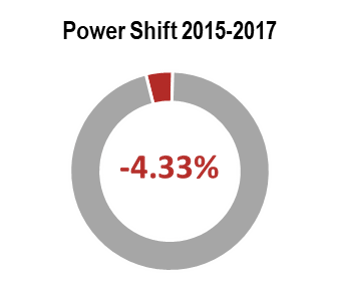 All is not well for Canada in the latest BPSM observation period. This can be seen most prominently in its status as the third biggest power loser based on its own Power Score (-4.3 percent), only faring better than the United Kingdom and Saudi Arabia. Moreover, Canada has lost a rank within the G20 for the first time since the 2009/11 period. Thus, it now has shifted into the weaker half and ranks 11th in 2017. Concerning Power Score and G20 rank, Canada has thus virtually traded places with Italy between 2015 and 2017. The Mediterranean country’s success is one of the most surprising findings of our BPSM update, but what are key factors in this development on the part of Ottawa?

In the military realm, for a start, Canada is well able to claim some gains: After having significantly raised military spending, especially between 2016 and 2017, its relative country shares accordingly increased from 1.08 (2015) to 1.26 percent (2017). This change can be partly attributed to a new political situation on the North American continent: Donald Trump’s administration has launched a striking retreat from multilateralism and leadership, spurring Canada to take on a larger global role. Interestingly, Canada has also increased its military personnel in the armed forces in absolute terms and therefore gained – albeit minimal – global shares between 2015 and 2017 (from 0.25 to 0.26 percent). 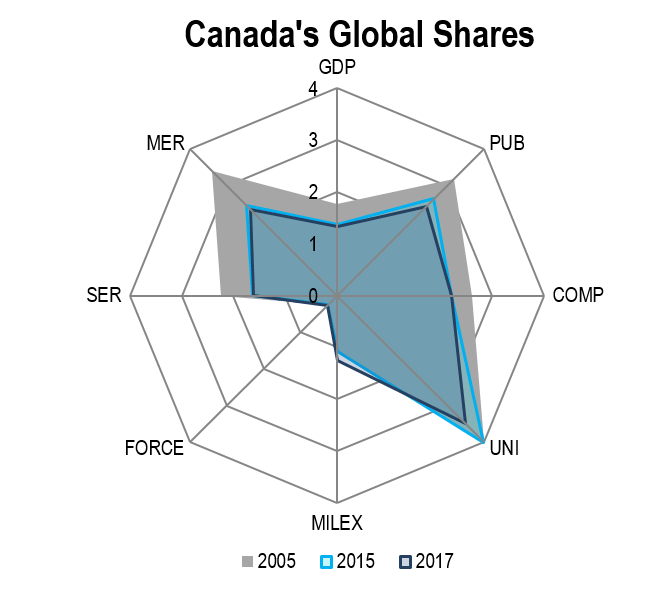 These absolute and relative achievements, however, fail to compensate for losses in other areas. The education and science indicators within the BPSM most notably did not work in Canada’s favors over the observation period. While publications saw a steady absolute and relative decline, with country shares going down to 2.44 from 2.65 percent, Canada’s number of excellent universities fluctuated over the observed years. As it has lost one top university from the global ranking (from 8 in 2015 to 7 in 2017), its corresponding country shares developed negatively.

In the economic realm, lastly, Canada fared considerably better in absolute than in relative terms. While the BPSM records growth in the respective categories of GDP and both service and merchandise exports, the country shares either stagnated or decreased slightly. Although Canada thus managed to impede a severe power loss in the economic sector – seeing that it also kept its share of Fortune 500 companies stable – it failed to make up for its power deficit in research and education. New political dynamics on the North American continent, however, might for instance shift gears for Canada’s development in the military indicators and Canada’s Power Score as a whole. 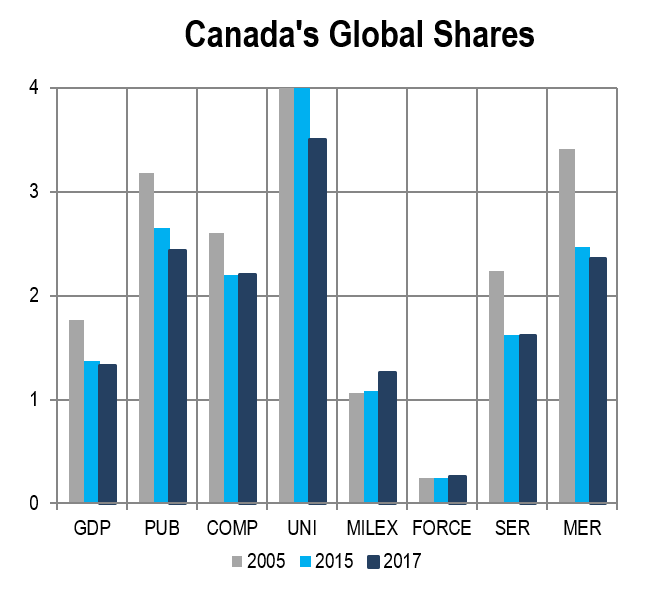 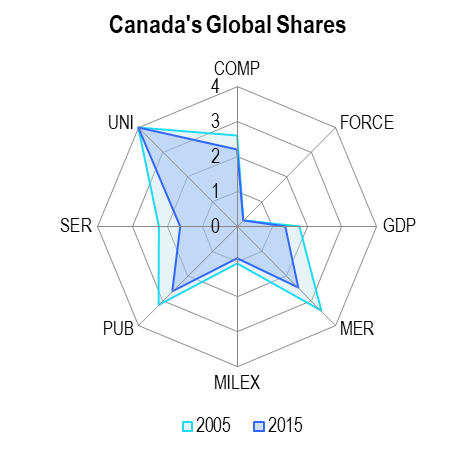 The “Great White North” is a common nickname for Canada, that can be related to its territorial size, cold weather, but apart from that also to its traditional middle power status in world affairs. While researchers already claimed that the former Harper administration has neglected the middle power identity[1], the Bonn Power Shift Monitor reveals that Canada has indeed lost a middle power competition to South Korea. The emerging power has surpassed the traditional middle power Canada in five out of the eight BPSM-categories in the review period. In 2015, Canada presents more elite universities than South Korea which is the only remaining category in which Ottawa still leads in front of Seoul. Yet the rising trend in international reputation of South Korean universities as well as the general decline of Canada’s power basis suggests that this last edge is likely to be lost in the near future.

Bringing Back its Middle Power

Canada is the first state among the G20 that falls in the power loser category ranking twelfth with a Power Shift Rate of -0.38 signaling a more than 16 percent loss of global weight. This corresponds to a shift from position nine among the individual G20 states in 2005 with a Power Score of 2.31 to rank 10 in 2015 with a Power Score of 1.93. Contrary to that, South Korea has shifted from rank twelfth to eight over the same years and presents a Power Score of 2.61, higher than Canada even at its highest point with 2.49 in 2007. This rearrangement in middle power terms points out the potential shifts over the last decade, particularly in favor for Asian risers. This observation is particularly interesting as South Korea is commonly defined as an emerging middle power, whereas Canada and Australia are classified as traditional middle powers, thus constructing the impression of similar global influence. 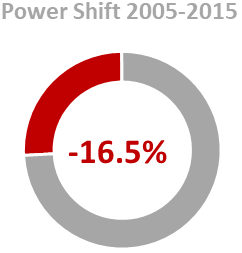 Moreover, such shifts indicate changing practices in international politics as South Korea pursues a more active global vision, whereas Canada has dismissed multilateralism under Harper.[2] Though Trudeau exercises a more cooperative leadership bringing Canada’s middle power identity back on the agenda, its impact still needs to be seen, particularly as Ottawa’s key partner, the United States, has adopted a confrontational course under Trump.

In the three macroeconomic categories, Canada has lost global weight despite presenting positive country trends. This corresponds to the pattern of most established powers and reflects the narrowing political clout of traditional industrial countries. While Canada is among the world’s largest economies, its GDP (PPP) in G20 comparison is only in front of Australia, Argentina and South Africa. Though it has grown by more than 35 percent in absolute terms from 2005 to 2015, its global share has marginally decreased (MC -0.4 percent). This indicator of wealth is also the first category in which South Korea surpassed Canada as early as 2006. Ever since, the Asian riser presents stronger growth although both countries have weathered the global financial crisis without a protracted downturn.

More severe seems the reduction of merchandise export shares which is the item of steepest decline in Canada’s weight and thus contributes the most to its power loss rate. Though the country trend remains positive, its exports, worth $410 billion, represent almost one global percent less than in 2005. Its commodities contribute to 2.47 percent of the world export volume in 2015, making Canada the ninth greatest merchandise exporter on the list. In contrast to its Asian competitor whose exports consist mostly of highly demanded electronics, Canadian merchandise is heavily resource dependent. While its oil trade is one of its key economic drivers, it is also one of its vulnerabilities as it is strongly dependent on price fluctuations.[3] Furthermore, merchandise and service exports are affected by stagnation in Canada’s most important trading partner, the United States, which more than three fourths of all Canadian goods were destined for in 2015.

This is accordingly reflected by a decreased proportion in global service exports – the second most affected BPSM category (SER: MC -0.61; ICR +32.77). As commercial services are the fastest growing sector of Canadian service exports, this sector has the potential to become a driver for high-paid, knowledge-intensive jobs that may provide a new impetus for Canada’s power profile.

Such high-end divisions nevertheless require the structural framework to unfold. In 2005, Canada presented a strong middle power position in the BPSM categories Fortune 500 businesses, renowned universities and scientific publications underpinning its structural as well as human resources advantages. In two of them, companies and publications, the red maple leaf was surpassed by South Korea and only lists one more elite university in 2015 than its competitor. Originally, Ottawa presented more top businesses on the list (13) than Seoul (11). Despite an even development in this category, Korean companies did not only outnumber the Canadian ones but remain a considerable step ahead with 17 on the Fortune 500 list compared to 11 from Canada in 2015. 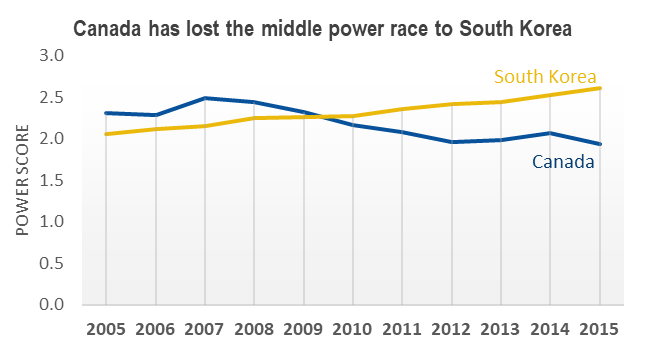 In the category of knowledge production, Canada managed to stay ahead of South Korea until 2014 when the Asian country first broke through the 62.000-publications level. Its reduced global proportion is further aggravated by slightly declining Canadian publication rates for 2015 even though the country trend remains generally positive (PUB: MC -0.55; ICR +28.48). Interestingly, Canada started off the review period at almost the same level as Italy as both countries published around 47,000 scientific articles. In contrast to Canada, Italy shows higher publication growths rates which held it even in front of Korea in 2015, although Rome also suffered from decreasing shares and is one of the greatest power losers in the BPSM.

A first look at Canada’s top universities seems pretty bright. The country presents eight elite academies in 2015 and thus shares the fourth rank with Australia and Japan in this category. However, in 2007 and 2008, Ottawa even domiciled 12 of those globally renowned universities, which darkens the outlook of this category. Nevertheless, Canada has a strong university-centered research system that performs above the OECD average which is also applies to its publications rate.[4] In order to remain among the global elite, the government has committed greater funds for research and innovation which aims to foster the country’s capacities for world-class research and growth-oriented firms.

Opposed to its middle-range position in most BPSM-categories, Canada turns out to be a military midget among the individual G20 states as visible in the illustration of its global shares. Its force personnel size is only larger than Australia’s with a reduced manpower of 67,500 armed troops in 2015. It still contributes only 0.25 percent to the world’s armed troops – a proportion that did not change as the decrease corresponds to the world average change. Even South Africa has surpassed the Canadian force personnel level over the review period underlining Ottawa’s disregard of hard power means.

The country also invests comparably little into its defense. Though the military budget was increased from $14.6 billion in 2005 to $15.3 billion, its global share was reduced to less than one percent. This is mostly related to the impact of the financial crisis after 2009, when the Harper government decided to cut spendings. Thus, a comparison between the 2009 peak of  military expenditures and their 2015 level reveals a drop of almost 20 percent in military spending. After Canada received great pressure from the United States to boost its military  commitment, Trudeau recently announced to dedicate greater attention e.g. in spending to its military which the BPSM is ready to count.

Despite a positive domestic trend, Canada has lost hard, soft and structural capacities in a global view which rising middle powers like South Korea conversely extended. With its global weight decreasing, Canada’s traditional middle power status has eroded not only in political but also in quantifiable terms as detected by the BPSM. Trudeau thus has to prove in times of challenging neighborhood that he brings the declared change to Canada and capitalize on a global shift in power.