In terms of the overall Power Score, Mexico rises to 16th place of the BPSM-Power-Ranking over the observed period. Moreover, Mexico comes in second in terms of Country Specific Change with a CC of 29.56. Due to a gain in terms of overall Power from 2016 to 2020, the country now ranks 4th, considering the Power Shift Rate (0,05). 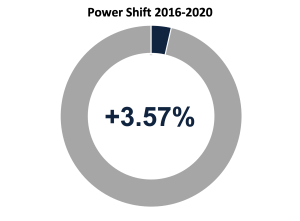 Along with the United Kingdom and Germany, Mexico records a slight decrease in GDP (PPP) (-0,23). Further, Mexico remains in control over two chokepoints, tied with Germany, Japan as well as Korea, and just in front of Argentina, South Africa and Saudi Arabia.

Taking a look at the Soft Power indicators: Mexico gained one more Top University in the observed period. Further, Mexico managed to increase its share among the Global 500 Companies, increasing from two to four companies. Moreover, Mexico only managed to add one new UNESCO World Heritage Site since 2016 and is therefore tied for last place with the US, Indonesia, Argentina, Australia and Saudi Arabia. However, Mexico boasts 35 sites in general.

To conclude, Mexico had a fairly successful period between 2016 and 2020. Its Pillars of Success are its Country Specific Change, where Mexico comes in second place, as well as its positive developments in terms of Soft Power. 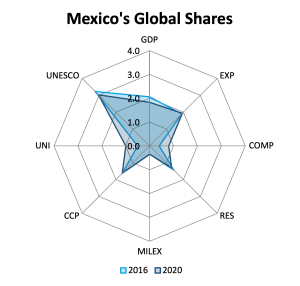