After the United Kingdom had already experienced power losses in the period from 2005 to 2015 with a Power Shift Rate (PSR) of -0.47, this development continued with a PSR of -0.41 for the following two years. London’s Power Score (PS) fell from 5.11 in 2015 to 4.70 in 2017. Among the G20 members, only the USA recorded an even bigger loss of power during this period, with a PSR of -0.48. The two states are thus far behind the third-largest loser Saudi Arabia with a PSR of -0.14. If one relates these losses to the country’s Power Score, the UK is even the second-largest power loser (ahead of Saudi Arabia) with a drop of -8.02 percent. 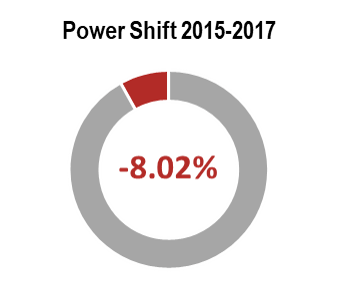 Looking at the individual categories, the UK presents an extensive loss of global shares in all domains examined between 2015 and 2017. Its relative decline is connected to absolute losses in the individual categories: The UK is the only G20 member presenting a negative country change rate of -3.18 percent between 2015 and 2017. Among the eight BPSM indicators, it progressed in only two categories: GDP (PPP) and service exports. As their rates are, however, below the global average, its domestic gains did not translate into international ones, but have even resulted in share losses.

The losses in the Fortune 500 companies’ segment is particularly noteworthy, where the number of British firms fell from 29 in 2015 to 24 in 2017. These losses lead to a decrease in its country share from 5.80 to 4.80 percent. In general, there has been an uneven but continuous downward trend in this category. 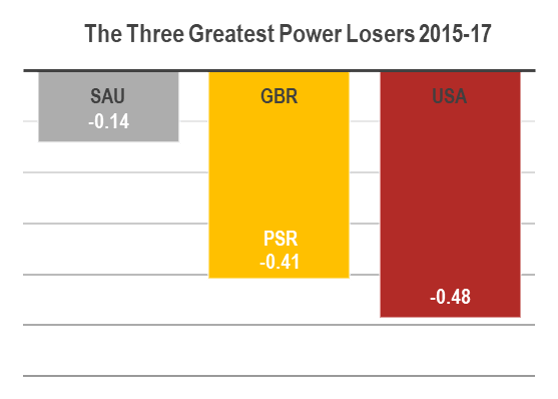 In the period from 2005 to 2015, the country thus recorded relative losses in all indicators, except for the top universities – a category in which the UK can proudly present a long prestigious history. The defending of its role as a scientific top dog is made more difficult by the fact that publication figures are slightly declining and are thus more relativized by rising states like India or China. 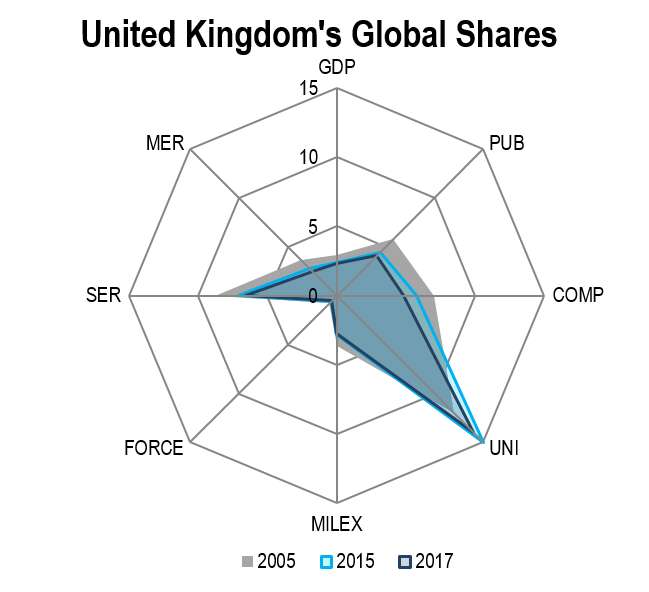 Despite these losses, Britain has been able to hold its third place among the most powerful G20 countries since 2015. However, the gap to fourth-placed Germany has shrunk, while the gap to second-placed China has grown. As the only G20 member states that presents both relative and absolute losses, the UK is hence one of the greatest power losers of the latest period of observation. 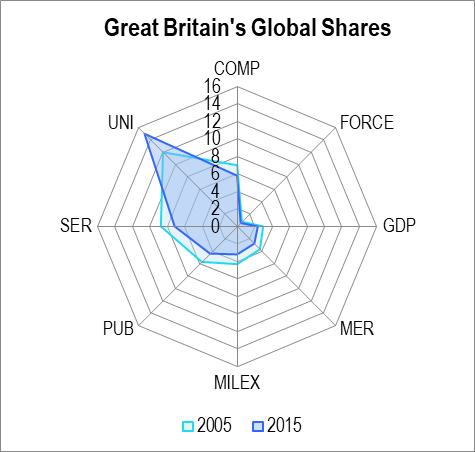 The United Kingdom can look back on a long history as a leading power on the global top. Yet the last century confronted the country with vast power losses: its global empire disintegrated and the UK had to redefine its status. The BPSM presents the UK as the third most powerful state in the G20 after the United States and China boasting a Power Score of 5.16 in 2015. While this sheds some glorious light on the island, it does not mean a stop in the country’s relative decline in international relations. Quite the contrary, it has lost almost 9 percent of its power base in comparison to 2005 (PSR -0.50) placing it 13th out of 19 for power shift. In fact, UK has only reserved the title as the third most powerful state in the G20 due to the stronger decline of Japan that slipped from rank 3 to 5. While the UK struggles to keep its strength in economic terms, it clearly defends its academic excellence which is the major reason why the island stayed among the global elite.

The UK’s relative power loss is visible in all but one category of the Bonn Power Shift Monitor underlining the importance of university excellence its global power status. In absolute terms, the economic categories of GDP, merchandise exports and service exports present positive growth trends. Adding the loss of six companies to the profile of economic power decrease, these four categories make up more than two thirds of the UK’s power decline in the 2005 to 2015 period.

Taking a closer look, its GDP rose by almost 40 percent making it the 10th  largest economy in 2015, closely after France. The economy slumped in 2009 due to the global financial crisis, but quickly returned to and stayed on a growth path. In relative terms, however, its shares have been falling continuously over the period of observation (MC -0.61 percent).

This is reinforced by the loss of six entries on the Fortune 500 list. Even though, Britain housed the fifths most companies on the list with 29 in 2015, it stays behind the United States, China, Japan and France. In 2006, the UK even had 38 companies among the world’s most valuable ones. Their number dropped to 26 in 2009 stressing the impact of the financial crisis on global elite businesses – particularly in the UK whose industry is dominated by large enterprises.[2] Even though, their number rose to 29 again, the lower figures indicate weakened structural, as well as reputational and competitive capacities. Still, London is a commercial hub, but even before strong uncertainty was induced by the Leave Vote, its global image as a sustainable junction is found damaged.

Britain enjoys the reputation as one of Europe’s strongest military powers.[3] The BPSM yet shows that UK’s hard power capacities are cut down in both absolute and relative terms over the 2005 to 2015 period. After a first phase of force reduction until 2008, Britain seemed to reorient and build-up its forces, yet by 2015, the force size was almost gradually reduced to 152,350 forces – almost 30 percent less than its 2005-amount of 217,000 armed forces. This also translated into an incremental loss in world shares (MC -0.21 percent) and reduces the UK’s forces to one of the smallest among the G19-individual states (15/19). Remarkably, the British forces are even smaller than Germany’s. 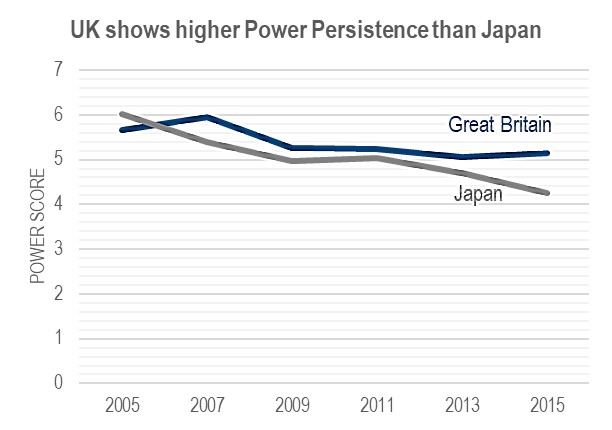 The decline in hard power is also visible in the UK’s spending pattern indicating the abandonment of hard military capacities as an activist foreign policy tool. While the British government has proven to be an ally in Afghanistan and Iraq, fatigue and financial issues seem to have impacted a stronger inwardly oriented defense policy. Defense budgets remain yet on a high level as the UK is the sixths largest military spender on the BPSM list in 2015 with a total of $ 53.9 billion. Compared to its relatively small force size, this high degree of spending would signal a strong hard power focus, if it was not cut down its original 2005-level (MILEX: MC -1.12; ICR -9.23). The reduction is even greater comparing the peak in spending in 2009 to the 2015-volume showing an almost 18 percent cut in expenditures. As the White House is currently urging its NATO-allies to take care of their limited operational readiness and prepare to maintain their security on their own, the UK needs to realize the consequences of having significantly lost hard power capabilities over the years.

The BPSM notes a high degree of academic excellence in the UK, most visible in the category of renowned universities. In the 2005-2015 period, it managed to increase the number of top 200 universities from 24 to 30. In other words, 15 percent of all globally renowned universities were based in the UK in 2015. Thus the UK hosted the second most elite universities on the list after the United States. Whereas Washington saw a falling trend in top-rated universities, London increased its share on the list translating it to the greatest plus in its BPSM score (UNI: MC +3.0; ICR +25.0). With 30 entries, there is a considerable distance to third placed Germany with 11 elite universities on the list. The figures stress UK’s particular structural power as their share of top universities and publications in top journals per GDP is above OECD average making the island a global scientific driver.[4]

Having said that, the Monitor recognizes a relative decline in the UK’s share of scientific articles until 2015. Though the country managed to increase the number in absolute terms to 101.207 articles published in 2015, the pace of growths remains behind the global average. This is also due to an incrementally falling trend in publication numbers since 2013. Therefore, while the UK is the fifths greatest knowledge producer by S&E articles on the list in 2015[5], other states demonstrate greater vigor. For example, Germany has surpassed the British output level in 2009 and stays constantly in front of it ever since. Furthermore, India did not even publish half of the British articles in 2005, but exceeded the UK’s output level in 2015 with more than 106.000 articles. This reveals a great shift in knowledge production capabilities that the British government has already tried to combat. Over the last years, London has set up reform and support plans for the scientific sector (e.g. the Productivity Plan in 2015) which aim to provide a stimulus to the research system and maintain its world-class status.[6]

Great Britain holds a prominent position in the international system of states. Its permanent seat in the UN Security Council, its NATO-membership and being the third most powerful country on the BPSM ranking highlight the vast power resources of the former empire. Then again, the negative Power Shift Rate and implications of the Brexit signal great challenges for UK’s favorable position in the world.

Whether the withdrawal from the EU will offer the UK a reinforced global heft or not remains to be seen. Certainly the country has lost a great share of its global power over the last century and remains a shrinking island state seeking to retain its Great Power status and reputation. For the 2005 to 2015 period, the BPSM shows that the UK has better managed this challenge than the also former empire Japan, but these were times in which it did not have to struggle over its future in Europe.