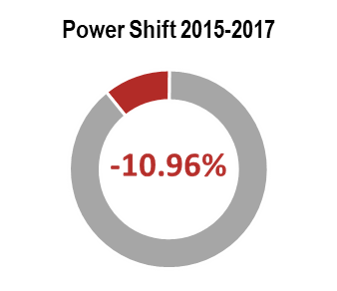 After a long phase of power gains for Saudi Arabia, the desert powerhouse has to endure a negative Power Shift Rate of -0.14 percent for the period of 2015/2017. This is the first time since the period of 2007/09 that Saudi Arabia receives a negative Power Shift Rate. However, it could defend its position on the worldwide power ranking, still ranking 14th out of 19. Therefore, the kingdom is still two places ahead of the only other G20 country in its region, Turkey. Additionally, even though Saudi Arabia made relative losses, it achieved absolute gains during the most recent phase, with a Rate of Country Change of 3.52 percent.

A closer look at the development of the categories reveals that Saudi Arabia´s relative power loss is mainly due to a decrease in military spending. It is the only category in which numbers decreased in absolute terms: In 2016, the Desert Kingdom significantly scaled back its expenditure significantly, but in 2017 increased it somewhat, so that spending in Saudi Arabia, Russia, and India is now at a similar level. Considering that Saudi Arabia has nearly always shown a positive development in military spending so far and that it made especially strong gains in this category during the last two periods, it is surprising that this traditional hard power cut the spending so dramatically. However, bearing in mind that Saudi Arabia is still massively dependent on oil exports, it can be assumed that this reduction is for a big part a consequence of the low oil prices during the latest period. This is a reminder that Saudi Arabia’s future power development will also depend on its ability to transform the national economy in order to become less dependent on oil revenues. 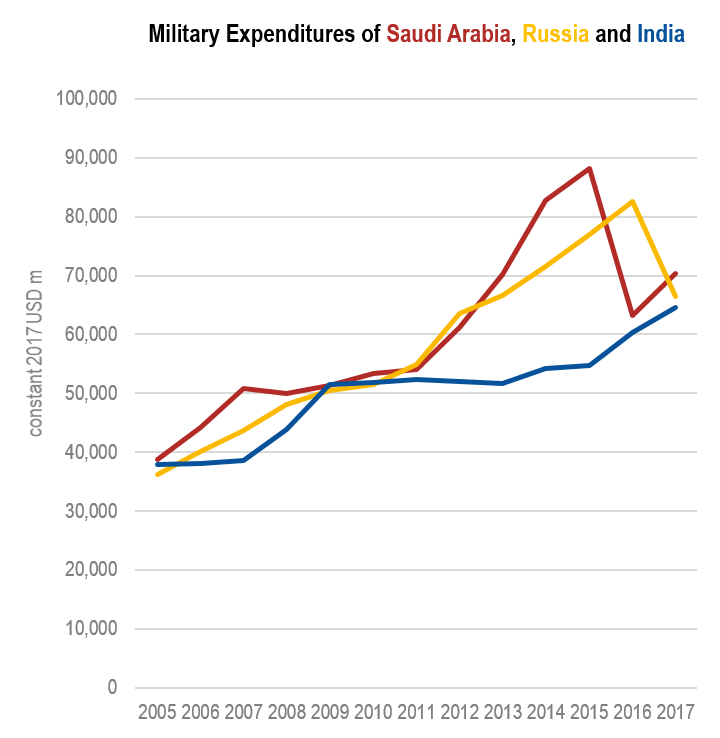 The only other negative category in relative terms is Saudi Arabia’s GDP, which has nevertheless been positive in an absolute view. This category does hardly count as negative with a -0.09 percent Market Change rate which only signals that Saudi Arabia’s development has been slightly below the global average. 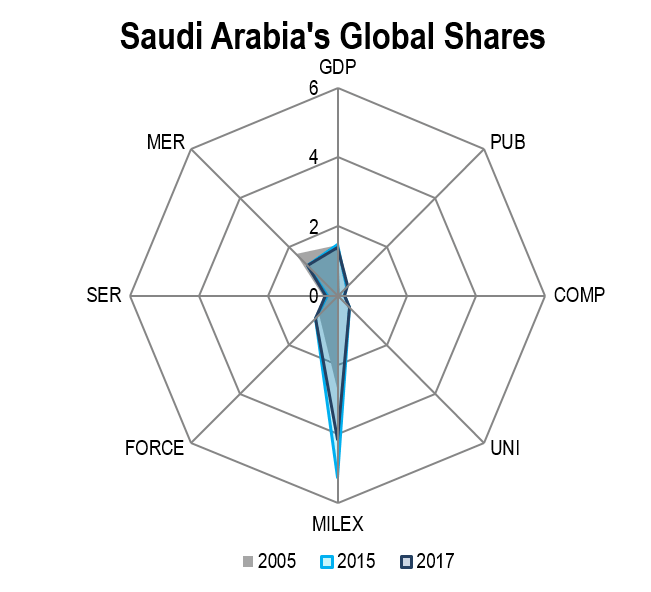 Even though all other categories show either a growth or no change at all during the latest period, those with a positive development lost momentum compared to the years before. Publications, for example, grew by 8.94 percent, while from 2013 to 2015 it was 23.05 percent. Surprisingly, only the value of merchandise exports showed a strong increase despite the low oil prices. However, it must be kept in mind that merchandise exports already decreased massively during the phase of 2013 to 2015 (ICR -45.85 percent), so that it only needed a small increase in exports to achieve a positive development.

All in all, it can be said that Saudi Arabia´s loss during the latest period is remarkable. When comparing the percentage change in power of the G20 state members, the kingdom even shows the steepest decline losing 11 percent of its power base, which might be related to its dependency on oil. The next years will show whether it will succeed in transforming its economy and, in doing so, stabilizing its power development. 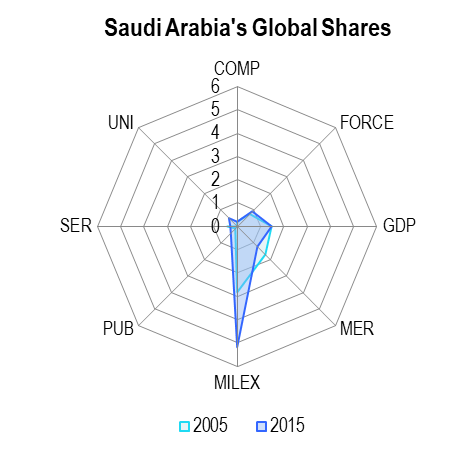 Saudi Arabia has gained attention for its hard power, particularly for its vast oil resources and military buildup. Apart from that, Saudi Arabia’s soft power as the capital of both the Muslim and Arab world is often underestimated. Its 2005-2015 performance underlines a strong headway as Riyadh’s power base has grown by remarkable 35.7 percent, which is in fact the second strongest upturn after China in the BPSM ranking. On a G20 scale, it has the fourth greatest power gains presenting a positive Power Shift Rate of +0.33 – that is, however, less than a tenth of China’s unmatched global gains.

The desert state has built up an enormous military power and is the only country in the region, besides Israel, whose elite universities compete among the world’s best 200 academies. These developments illustrate the synergies of hard, soft and structural power that underline Riyadh’s leverage as a regional power. Having said that, the Kingdom was unable to improve its  power rank staying on position 14 out of the 19 states under review. Nevertheless, it has increased the distance to Turkey, which had the same Power Score (0.94) in 2005, but lags behind Saudi Arabia’s Power Score of 1.27 in 2015. These figures already indicate that Riyadh is ambitiously expanding its influence, making it a relevant actor in world affairs.

Armament as Assurance for Power

In 2005, Saudi Arabia’s military expenditures were slightly lower than Germany’s, making it the seventh largest military spender among the individual G20 states. Yet the Monitor recognizes a dramatic shift in this category: After a first phase of moderate spending growth between 2005 and 2010 by 38 percent, the military budget has been massively scaled up by 63 percent since 2011. The 2015-volume of $87.19 billion makes Saudi Arabia the third largest military spender after the United States and China. There is even a remarkable distance to Russia, the fourth largest spender, which has spent about $20 billion less in 2014 and 2015. 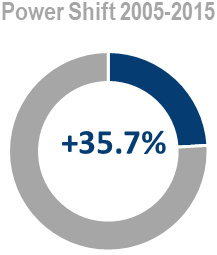 The Arab spring, the withdrawal of US troops from Iraq, the rise of ISIS, and the wars in Syria and Yemen are examples of critical issues for the Kingdom’s internal and external security. Related to this, Saudi Arabia has become the world’s biggest importer of arms together with India reflecting its buildup orientation and a perceived need to gather defense capacities.[1]

The huge expansion of its military features is the main factor of Saudi Arabia’s positive Power Shift state. To illustrate: The Kingdom’s military expenditures in 2015 are more than five times higher than Turkey’s. On the opposite side, Saudi Arabia’s force personnel count less than half of Turkey’s. Nevertheless, Riyadh steadily increased the number of its armed troops from 216,000 to 251,500 over the review period. With this gradual increase, it replaced Germany, which itself reduced its personnel, on place 13 out of 19 ranking armed troops size. Contrary to the impression of an incremental increase, the Monitor finds that Saudi Arabia’s force personnel expansion is the third greatest increase in manpower in the G20 after Mexico and South Africa.

Saudi Arabia’s GDP (PPP) has increased by more than three fourths, which is almost the same as the world average. Hence, its country share remained stable comparing 2005 to 2015. This means that the GDP growth of $735 billion was necessary to keep its position, but was not a factor contributing to its power improvement. Saudi Arabia remains by far the richest nation in the close neighborhood, but on a larger regional level, the desert country lost competition against Turkey since its GDP surpassed Saudi Arabia’s in 2010. Saudi Arabia’s oil exports, which account for about 90 percent of the government revenue, generate also the largest share of its export volume.[2] Accordingly, its merchandise exports are highly dependent on the oil price, which is reflected by the respective BPSM category noting strong fluctuations over the years. When the price per barrel was high, Riyadh’s profit in merchandise trade increased and vice versa. To illustrate: The Monitor records a dramatic decrease for 2013-15 parallel to falling oil prices. As a result, Saudi Arabia’s country shares in merchandise exports (1.2 percent of the global volume) were even lower than in 2005 (1.7 percent).

Furthermore, India surpassed Saudi Arabia’s commodity exports in 2015 and took its place as the twelfth largest merchandise trader of the G20 states. However, the finite nature of fossil fuel reserves point to power limitations in the long run despite their undeniable structural advantage for Saudi Arabia’s upswing. This could also affect Sabic, Saudi Arabias only company among the Fortune 500 and a leading company in diversified chemicals. The inclusion of the company among the Fortune 500 alone underlines a structural advantage of Saudi Arabia in contrast to South Africa and Argentina that cannot present any leading corporation. Yet the inability of the Kingdom to provide worldclass growth to more of its domestic businesses over the period under review hints at structural challenges that need to be tackled for further power expansion.

Compared to commodity revenues, Saudi Arabia’s service exports contribute far less to its GDP. The BPSM records an all-time high in 2006 with $16.4 billion just before a severe downfall in 2008 to $ 9.3 billion. So far, the service export rate did not recuperate from this enormous drop. Consequently, Saudi Arabia’s trade in services, which include mainly travel and transport offers, remains the second lowest in the G20. The total amount of $14.4 billion in 2015 is little less than South Africa’s ($15 billion) and slightly more than Argentina’s ($13.9 billion). This also indicates the urgent need for economic diversification if Saudi Arabia aims for a sustainable hard power buildup.

During the research period only two universities managed to enter the list of the top 200 universities – at least temporarily. King Saud University was included in 2011 and 2012; King Fahd University of Petroleoum & Minerals joined the leading top in 2015. Although both Saudi Arabian institutes were positioned among the lowest three ranks, its timewise inclusion signals an important shift. These are the only elite universities in the entire Middle East, besides those of Israel, to be acknowledged among the worldclass. Thus, despite the fluctuating on and off of Saudi Arabian universities on the list, the category indicates Riyadh’s intention to establish itself as a center of education and knowledge in the islamic world. In addition to that, its academic output grew by 412 percent since 2005. This is Saudi Arabia’s highest domestic change rate and the second largest after Indonesia (ICR +830 percent) among the G20. By quintupling its publications, the desert state surpassed Argentina’s academic output. This is a formidable development, even though the Kingdom remains at the lower ranks of total scientific articles at place 17 out of 19 in 2015 and only gained +0.27 percent in its global shares (MC). Although only China (MC +6.72), India (+2.38) and Brazil (+0.84) shifted more shares in their favor, Saudi Arabia’s academic output still lags far behind the G20’s average in publications. Even Turkey, which never hosted a top university in the review period, presents a three times higher academic output than Saudi Arabia. However, when King Abdullah came into power in 2005, he heavily invested in education by building up schools and expanding universities.[3] Given these efforts, it seems only a matter of time until the Saudi Arabian institutes will be better ranked among the world’s elite. In sum, both scientific categories stress a positive shift in Riyadh domestic as well as international influence and power profile.

In sum, the BPSM reinforces the impression of a Saudi Arabian rise in domestic, regional as well as global affairs. Then again, it points to certain limitations of power, among them, great dependence on oil revenues that restrain its rise in times of low prices. Nevertheless, the Kingdom’s wealth of resources enabled huge investments especially in the military and education that improved its hard, soft and structural power profile. In view of the US withdrawal from the Middle East, it seems prudent to Riyadh to adopt the role of a regional influencer who already presents the capacities as well as willingness to do so – even though it cannot compete with the United States overall power level.