Republic of Korea: Losing for the First Time

After having achieved the third strongest growth among the G20 countries during the decade of 2005/15, South Korea now has to endure a surprising cut in its power rise: For the first time ever in the whole period under investigation by the Bonn Power Shift Monitor, Seoul receives a negative Power Shift Rate (-0.09), meaning it lost power relative to the other observed countries during the most recent period of 2015/17. 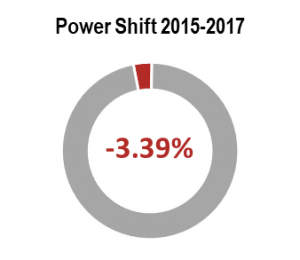 Moreover, South Korea´s absolute growth reduced dramatically as well, with a Country Change Rate of only 0.50 now, compared to 6.15 for the phase from 2013 to 2015. This means that South Korea received the second-lowest absolute growth rate in 2015/17, with only the United Kingdom coming off worse. Despite this marked loss of international power, South Korea is still on place eight in our Power Score ranking. However, the distance to rank nine, Russia, decreased, leaving now only 0.09 Power Score points in between. Bearing in mind that South Korea´s power increase in the last decade was for a good part a result of its economic growth, driven by top companies such as Samsung, a look at the performance of the economic indicators during 2015/17 reveals possible reasons for the country´s recent development. The biggest losses, both absolutely and relatively, can be found at service exports and top companies, with the number of the latter having decreased to 15, from formerly 17. Even though South Korea also managed to make absolute gains in the field of economy, with both the GDP and merchandise exports increasing, those winnings could not translate into significant relative figures. All of this shows that South Korea´s economy is losing steam in the international competition, which is the main reason for its recent power loss. 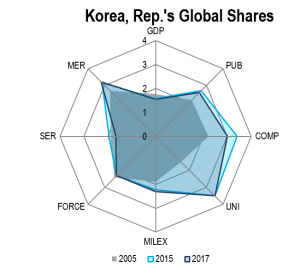 As South Korea´s economic success in the past was for a big part due to its innovative dynamics, the scientific categories are of special importance to the country. Here we can lately see a stagnation, with no development at all in the area of top universities, and very moderate absolute gains concerning publications, with an Indicator Change Rate of 1.01, compared to 7.55 during the previous period.

Concerning South Korea´s military forces, we find a continuing, albeit decelerated absolute decrease in armed forces, while the military spending increases further, even though slower than before as well. Thus, the general trends do not seem to have changed much here. 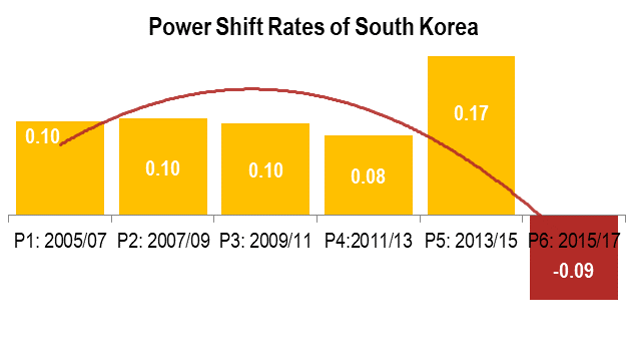 All in all, South Korea´s power loss can be mainly traced back to its recent losses in the economic categories. As the economic problems are of a structural nature, depending largely on global trade dynamics, it is uncertain whether South Korea can accelerate its economic development anytime soon. However, since Russia´s Power Score decreased as well and with the lower ranks having a much lower Power Score than South Korea, it seems likely that Seoul can defend its place on our ranking in the near future.

Middle Power with a Global Vision 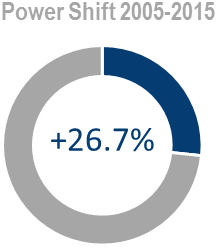 Since the mid-2000s, the Republic of Korea has turned to a global agenda envisioned by President Lee Myung-bak. His Global Korea strategy laid the foundations for a more active role in international relations expressing its growing middle power status. In fact, the BPSM found that South Korea has the third strongest growth in international power on our list with a Power Shift Rate of +0.55. This marks an almost 27 percent increase in power over the last decade. The Land of the Morning Calm thus moved up four places to rank 8 among the G20 states. With a Power Score of 2.61, Korea surpassed traditional middle powers such as Canada or Australia in our ranking and stays now behind the traditional Western leader France. This stresses South Korea’s growing global role which particularly derives from gains in structural hubs of leading universities and companies.

Over the last quarter-century, South Korea’s transformation has been extraordinary. Most recently, attention has shifted to other emerging states, most prominently pronounced by the acronym ‘BRICS’.[1] Yet in contrast to them, South Korea was already a high-developed country at the beginning of our observation period and impresses by its stable enlargement of widespread welfare and power. Over the last decade, the country has further developed in economic as well as social terms. Its importance is e.g. reflected by Korea’s inclusion in the OECD Development Assistance Committee (DAC). The DAC 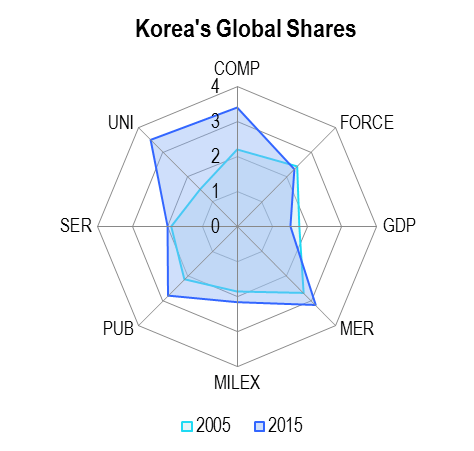 coordinates the development assistance of donors such as the United States, Germany or Japan. For the first time, a former recipient country has been welcomed to the prestigious committee reflecting South Korea’s growing influence on the global stage.[2] In 2012, it even joined the “20-50 club” as the first newly industrialized country with a population of more than 50 million that have a per capita income of more than $20,000 crowning Korea’s rise and reputation among the world’s leading states.

Even though, South Korea’s economic growth is overall remarkable and higher than in most developed countries, it stays behind the pace of the emerging economies. This is reflected by a slight loss of global shares in the GDP category, even though it showed a positive growth rate. Korea’s relative and absolute gains in merchandise (MC +0.49; ICR +85.2) as well as service exports (MC +0.1; ICR +92.65) reflect its growing significance on global markets. In all these economic categories, South Korea has managed to surpass Canada reflecting a shift from West to East.

The country’s greatest strength is also its greatest vulnerability: Korea’s export-dependent economy heavily relies on the success of high-tech giants such as Samsung or Hyundai which are also on the Fortune 500 list of globally leading companies. These family-owned conglomerates make up the lion’s share of South Korea’s trade and wealth. Their success has lifted the country from poverty to global leadership.[3] The expansion of globally leading companies from 11 in 2005 to 17 in 2015 indicates South Korea’s growing global brand and admiration as a producer for sophisticated goods, especially in technological terms. These companies have accelerated the globalization of the Korean economy and produce the growing trade surplus for the country. In addition to recurrent scandals of corruption, these firms have also been criticized for suppressing the evolution of startup companies. This prompted reform calls to revive the almost stagnating economic growth since the 2010s, but their impact needs yet to be seen.

South Korea’s enormous economic growth is largely owed to strategic investment and policies to foster its technological supremacy. In international comparison, it has significantly improved its scientific skills over the last years. While it only had three world class universities on the QS ranking in 2005, there were already seven in 2015. The BPSM also notes that South Korea has more than doubled its publications output from around 32,000 to more than 64,000 during the review period. The plus in scientific articles clearly exceeds the global average, even though South Korea still produces few publications by OECD standards. Nevertheless, also in this category, the Asian riser managed to surpass the level of Canada in 2014 and published already more than Australia in 2005 which reflects its growing influence in the global knowledge economy.

As formulated by the Global Korea strategy, the government aims to play a more visible role in world affairs. This can also be related to its military policy: South Korea has been an active contributor to UN missions since its accession in 1991. Engaging in peacekeeping and reconstruction missions, Seoul signals its civilian orientation and aims at gaining international appreciation.[4]

However, in a regional context, its defense is clearly directed towards possible threats stemming from North Korea. As tensions between the countries have been growing over the last decade, South Korea has developed a military strategy adapted to its demographic challenges as well as technological advantages. It decreased its force personnel size by more than 58,000 to around 634,500 which even exceeds the global average cut in armed troops (FORCE: MC -0.12; ICR -8.44). In contrast to this, the administration has increased its military expenditures by more than 40 percent. These opposing trends follow the ultimate goal of creating a more elite military force as laid out in the official defense papers. Aiming at a 40 percent reduction of its entire manpower by 2025, South Korea will lose some traditional hard power capacities which is planned to be substituted by greater sophistication and force readiness.[5] In a global comparison, however, its investment stays on a modest level as it still spends significantly less on defense than for example Japan. Having said that, Seoul has gradually stepped up the defense budget over the last years, so that the gap to Germany’s and Japan’s spending level seems to close in the future. In contrast to this, its defense budget has been higher than that of both traditional middle powers, Australia and Canada, since 2005. In addition to its much higher force personnel, South Korea has a particular hard power edge in the middle power category of the G20.

Middle Power on the Rise 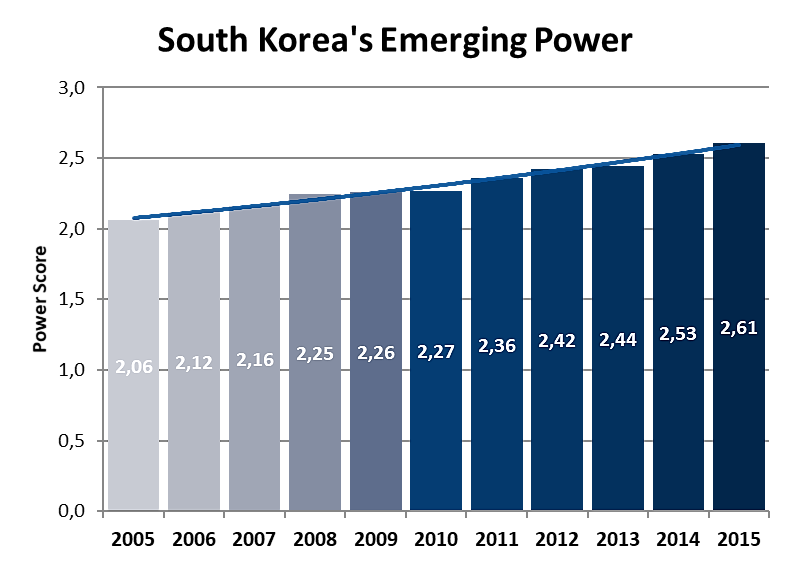 c strengthening of core capacities in technological sectors. While the country was considered a developing nation in the 1990s, it has rapidly risen to a high-development donor status with the capacities to forge beneficial relations to upcoming nations. Owing its rise to highly-demanded technologies around the globe, the country possesses great structural and soft power, but remains vulnerable in hard power terms – despite its military modernization approach. This vulnerability remains critical in both economic terms concerning the ambivalent role of leading family-owned companies, as well as military regards in view of regional tensions with North Korea or rivalry with China. Nevertheless, South Korea has already recognized its weak spots and tries to address them with deliberate action plans. Despite these internal challenges, South Korea has managed its way to the global top becoming a leading middle power that does not shy away from using its strategic resources.