Indonesia has already been one of the most successful rising powers in the G20 in our previous BPSM issue. As its latest numbers indicate, this power expansion has not yet come to an end. Among the G20 member states, Indonesia is only a minor power-house. With a Power Score of 0.96, the Asian riser ranks only 17th out of 19 and has never left this place since 2005. The country thus starts from an unfavorable position, but if it continues its current growth trajectory, it is likely to overtake the next higher ranked Turkey in the near future. It al-ready managed to expand its score by 35 percent since 2005, which is the second-highest increase based on the individual scores for the total period behind China (+82 per-cent). 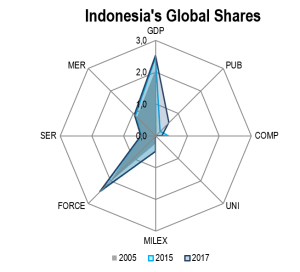 Taking a closer look at Indonesia’s latest developments, its country change rate is still remarkably high. With a Rate of Country Change (CC) of 25.88, it presents the second-highest country changes behind Italy (40.99) and ahead of India (18.41). Indonesia’s relative and absolute power increase is owed to only four out of the eight BPSM categories, indicating a great, but non-uniform thrust forward. 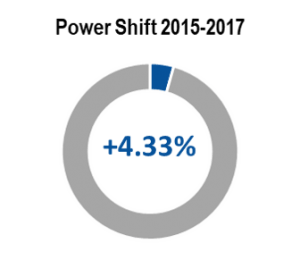 The most striking category is that of scientific publications. Although Indonesia has yet to present a university among the top 200 (only Turkey presents the same poor pattern), its scientific publication numbers have surged to new highs. Already in the latest BPSM issue, Indonesia was honored for its enormous growth in this category. Between 2015 and 2017, the output has more than tripled (+218 percent) from 4,555 to 14,471 articles. The gap be-tween the international reputation of its universities and its high publication output might be related to its Science and Technology Index (SINTA) – a system introduced in early 2017 to measure research performance whose scores are also related to publication numbers of researchers. Critics have already warned in the past that Indonesian researchers are pushed to inflate their performance rating by quantity over quality, i.e. by a high number of low-quality publications. That being said, it is in general a positive development for the country that its researchers show that they are able to play a larger role in international science.
The gravest factor is the loss of one company among the Global Fortune 500. In 2013, Indonesia managed to list its first company, the Petroleum company Pertamina, on the Fortune 500. One year later it was followed by another energy company, Perusahaan Listrik Negara. Since 2016, however, the latter was stricken off the Global Fortune 500 which raises the question of whether Indonesia is able to produce a favorable economic environment for large-scale businesses.

In view of its military-build up, Indonesia presents an irregular pattern since 2013. Between 2009 and 2013, the country raised its expenditures significantly, but since then, it seems to be an up and down. This results in its second negative rating among the BPSM categories. Interestingly, in terms of armed forces, Indonesia re-ports constant numbers since 2011 leaving this category without influence on the country’s Power Shift Rate. However, the Asian riser continues to expand its hard power in economic ways: In all three economic categories (GDP, merchandise and service ex-ports) the BPSM records both relative and absolute gains for the 2015/17 period. All in all, Indonesia continues its rise which is likely to translate into a better ranking in the next issue of the BPSM. 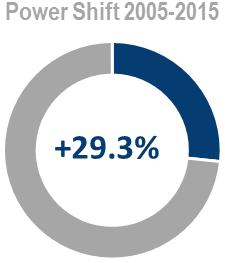 Indonesia’s power slowly but steadily increasing on a global scale. During the period under review, the Bonn Power Shift Monitor has recorded a Power Shift Rate of +0.21 for the island state which ranks it 7th on the list. This rate marks an increase of almost 30 percent to Indonesia’s power in 2005. In absolute terms, Indonesia is still by far the smallest Asian-Pacific power in the G20. It’s Power Score is only 0.92 in 2015 which ranks it 17th among the 19 rated states – only Argentina and South Africa have a smaller power base. Although Indonesia shifts power in its favor, it cannot keep up to the pace of certain rising neighbors such as China or South Korea. Its small but positive power shift is particularly related to three BPSM categories which are armed forces, leading companies and its GDP growth, whereas Indonesia cannot present any progress in view of top-rated universities.

Island State but not Insulated

Over the last years, Indonesia has increased its global footprint in six out of the eight categories considered by the BPSM. With its extraordinary economic growth, it is now placed among the global top ten in terms of purchasing power parity. This is also visible in a growth rate above the global average that corresponds to the expanse of Indonesia’s economic shares in the GDP category of +0.37. These figures illustrate Indonesia’s success story managing to overcome its downfall from the Asian Financial Crisis in 1997/8 and to transition from authority to democracy. Though it achieved to double its GDP over the years considered, Indonesia’s progress stays behind other emerging economies, most prominently China, resulting in comparatively low foreign interest, hence a research gap, in the country’s development.[1] 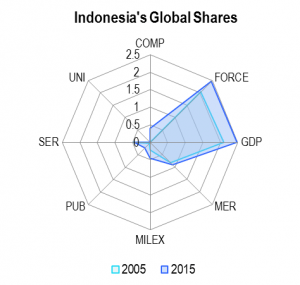 Most interestingly, the country’s international footprint has varied significantly over the last decade. In general, Indonesia’s positive trade balance underlines its potential for projecting economic power abroad. Having said that, its economy is by far not as export oriented as for example that of China. This proved a structural advantage in the past as domestic consummation compensated lower external demand during the global financial crisis of 2009.[2] On the other hand, low export quotes underline little international influence in terms of trade. Indeed its export shares have been decreasing over the last years, while still remaining positive.[3] However, the marginal increase of merchandise export shares (MC +0.08 percent) and even slight reduction of service export shares (MC -0.03 percent) indicate that Indonesia does not harness its potential evolve as an influencer of global markets.

While the island state is not insulated global policy making as in the G20, its relative underperformance in shaping the economies of tomorrow is reflected by the two Indonesian companies listed among the world’s largest in 2015. Both, Pertamina and Perusahaan Listrik Negara,[4] are state-owned companies that hold certain monopolies in the state. Two entries on the 2015’s Fortune 500s list is certainly a positive remark for Indonesia. Compared to the much higher number of e.g. Korean companies (17 in 2015), the indicator however reveals lacking incentives for private sector development.

The BPSM notes lacking innovation and knowledge-based capacities that hamper Indonesia’s long-term prospects. Currently, the state’s economic growth heavily relies on the exploitation of its natural resources, e.g. coal, liquid natural gas and palm oil.[5] Thisn elevated the country to the G20 and contributed to rising welfare. In turn, this signals low competitiveness in research-intensive domains as more than half of Indonesia’s exports consist of primary commodities.[6] Its innovative backlog is emphasized by the BPSM data: no Indonesian university is listed among the QS world’s elite and Indonesia has the lowest publication output of all individual G20 states. The country published only 5,071 scientific articles in 2015 which is not even one tenth of Australia’s research output (52,147 articles). There is, nonetheless, an intensified dedication to raise its academic impact expressed in an enormous 830 percent increase (ICR) in the number of publications between 2005 and 2015 which is by far the steepest increase of publications in our ranking. To illustrate: in 2005, the National Science Foundation only recorded 545 Indonesian publications. Its low significance is yet expressed by Indonesia’s marginal global share of only 0.22 percent of all recorded publications in 2015 in comparison to Australia (2.26 percent) or next ranked Argentina (0.38 percent). 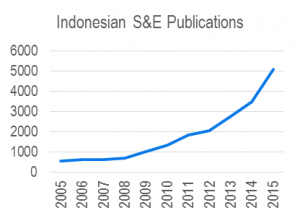 Both the Indonesian academic community and the government are aware of their little international impact. The Directorate General of Higher Education tried to foster the research output by decreeing students to publish in academic journals as a precondition for graduation in 2012.[7] Yet this did not change the disincentive at universities to promote and fund researchers based on teaching hours with less emphasis on research. Furthermore, there is a strong divide between universities based on Java and those that are not. Around 90 percent of the recorded publications have been produced by researchers based in Java due to better access to funding.[8] However, the division between the islands also holds beyond the education sector, e.g. in terms of infrastructure expansion.[9] This suggests more balanced political attention beyond the capital island in order to foster development throughout the country.

Concerning its hard power, Indonesia succeeded to build-up its military capacities and also devoted greater investments into defense issues. The BPSM records in both categories a relative as well as absolute increase. This is particularly notable as on a global level, the number of force personnel has decreased over the period of observation, while Indonesia staffed up its armed troops by 16 percent, a plus of more than 94,000. In addition, it more than doubled its defense budget up to $7.6 billion in 2015. While this sounds like a broad upturn in spending, its sheer manpower which is the sixth largest force in the world, consumes much of these extra resources. Therefore, the Tentara Nasional Indonsia (TNI) are considered as weak in global comparison despite being one of the biggest militaries in the region.[10] To illustrate, in the Asian-Pacific view of the G20, Indonesia has more force personnel than South Korea, Japan and Australia as of 2015. The current President Jokowi has yet recognized the gap between funding and personnel size promising to raise the defense budget in the next years.[11]

The increase of hard power capacities is oriented to cease internal security challenges such as insurgent movements, as well as external challenges concerning maritime defense. As Indonesia is also one of the largest contributors to UN Peacekeeping Missions, its military upgrade has also an impact on its foreign reputation, thus soft power. In general, Indonesia concentrates on diplomacy and a non-confrontational approach instead of robust hard-power projection in international affairs.[12] The BPSM data reveals that there is, however, a growing dedication towards military modernization. Nevertheless, Indonesia contributes only about one-third of e.g. Australia’s defense budget to its more than ten times bigger force personnel, signaling hard power as a second-order issue to the Indonesian administration.

Indonesia as a Bridge-Builder

Indonesia has long been underestimated in its significance for international affairs. The Bonn Power Shift Monitor records its outstanding expansion while being challenged with social transformation and internal security threats. Among the world’s leading powers, Indonesia remains small, the third smallest in the G20 in front of Argentina and South Africa, but steadily growing. Being among the founding nations of ASEAN and MIKTA, Indonesia has proved its capability to act as a bridge-builder between developing and developed states taking a soft-revisionist stance to voice emerging power interests.[13] The Monitor thus points to Indonesia’s geostrategic opportunities, but also stresses to tackle security and research-related weaknesses.

Gindarsah, Iis (2017). “Indonesia’s Security and Defense Outlook: Evolving Low-Intensity Threats and Recalibrated Countermeasures.” In: Security Outlook of the Asia Pacific Countries and Its Implications for the Defense Sector. Tokyo: The National Institute for Defense Studies, pp. 31-42.