At first glance, not much seems to have changed concerning Brazil´s power during the last years: South America´s biggest country shows a negative Power Shift Rate of -0.02 percent for the period of 2015 to 2017, the same figure as during the phase of 2013 to 2015. Brazil thus continues its sluggish power development. Since 2012, a slightly negative, but irregular curve has been recorded by the BPSM. Nevertheless, Brazil was able to defend its place on our Power Score ranking: It is still ranking 12th out of 19, which puts Brasília seven ranks ahead of the only other G20 South American power, Argentina. 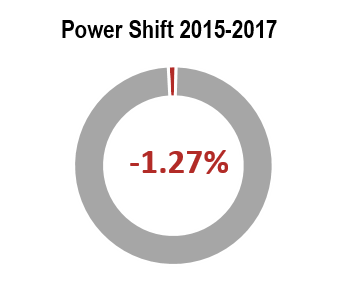 A look at the Rate of Country Change (CC), which indicates a country´s absolute development during the period, reveals that not everything is nearly unchanged: While Brazil achieved a CC of 7.77 percent in 2013/15, it is only 3.14 percent for the following two-year period. This rate is even below the G20 average and raises the question, whether Brazil can still be referred to as a rising power. However, it must be taken into consideration that the positive absolute development of 2013/15 was mainly the result of Brazil winning one more university.

An even more dynamic development can be observed regarding the individual categories: four out of five categories with a negative development in absolute terms for the 2013/15 period have shown progress during the latest phase. Those categories are primarily economic ones (GDP, merchandise and service exports), with the most astonishing change occurring in merchandise exports.

This indicates that Brazil is recovering from the economic recession that started in 2014. Moreover, Brazil´s absolute figures did not decline in any of the individual categories during the most recent period, although the numbers of top universities and companies have stagnated. 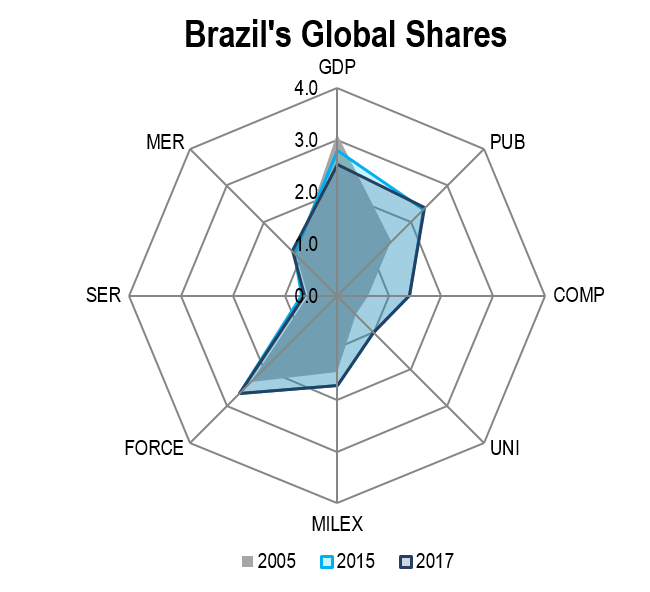 Having said that, the positive absolute development of the categories does not translate into similar relative gains: Only merchandise exports and scientific publications show an absolute and relative increase, while all other categories are either stagnating or showing relative losses (for example GDP, with a Market Change of -0.26 percent).

Thus, even though Brazil seems to be recovering from its economic problems, the absolute increase is not big enough to make relative power gains. With Australia, which ranks 13th in 2017, being just 0.04 Power Score points behind Brazil, South America´s biggest power has to increase its efforts in order to defend its place in the BPSM in the years to come. It remains to be seen which effects the pro-military and liberal market policies of Brazil´s new president, Jair Bolsonaro, will have on Brazil´s power development.

Brazil – A Riser in Trouble

Brazil has risen to the global top in both political and economic terms over the last decades. With a Power Score of 1.68 in 2015, it is the most powerful Latin American country displaying a 22.6 percent growth of its power base since 2005 (PSR +0.31). With this shift, it is the fifth greatest power gainer in the BPSM 2005 to 2015 ranking. Nevertheless, the Land of the Palms is facing significant challenges that pose risks to it political and economic stability. 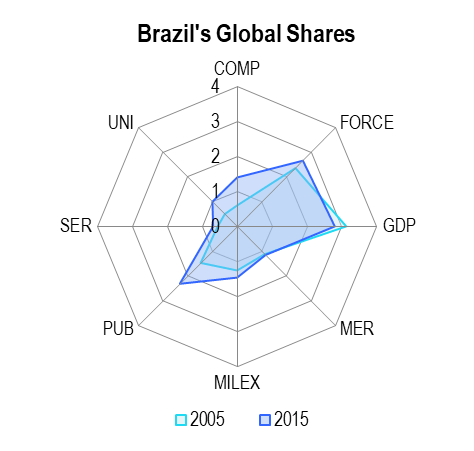 The new millennium brought significant development to Brazil’s economy. By 2015, it was already the seventh largest economy in the world and the largest in Latin America. While its rise has been more steady than spectacular, the figures demonstrate that Brazil has made up its way to the global economic top. Still, the numbers also show a sharp decline in economic performance in 2014 when the country entered recession. This is also noted by the BPSM numbers peaking in this year, before plummeting. Though the country rates are overall positive (ICR), the expansion of international shares has not only stagnated but was already reversed since 2012 underlining the slackening growth. The fading momentum is most visible in the loss of country shares measured by GDP (MC -0.33 percent). As measured in purchasing power parity, this underlines that Brazilian consumers are particularly hit by the economic downfall resulting in blatant unemployment. Still, volatility is nothing new to the Brazilian economy whose history shows recurrent boom and bust cycles.[1] On the other hand, its remarkable upswing after the global financial crisis underlines the robustness of Brazil’s rise.

As the country has not yet fully recovered from the 2014 setback, it should reconsider its restrictive trade policies. In terms of merchandise and service exports, Brazil has made some gradual steps towards integration into global markets apparent in positive market shares and country growth rates in both categories. However, the categories differ quite significantly in their meaning for Brazil’s position on a regional and global level. Although merchandise exports have grown by more than 60 percent (ICR) over the period of observation, this marks an almost non-existent increase of global market shares (MC +0.03 percent). This is also the only category in which Brazil’s influence remains smaller than that of Mexico in our ranking underlining a major weakness in its regional leadership role. In the service exports category, Brazil’s growth reflects its regional power status, surpassing the rates of both Argentina and Mexico by more than doubling its export rate (ICR +125.55 percent) and expanding its global share by +0.13 percent (MC).

While the BPSM reflects Brazil’s general upturn, it also reveals its low integration in global trade compared to other emerging markets.[2] Overall, Brazil maintains high trade barriers as for example its average tariffs are eight times higher than Mexico’s, resulting in higher prices for consumers and vendors. According to OECD reports, this precludes Brazil from obtaining higher productivity, global competitiveness as well as a fresh boost for recovering from the economic crisis.[3]

As other emerging countries, Brazil has made remarkable progress concerning low levels of innovation linked to lacking human capacities. The number of leading companies has increased from only three in 2005 to seven in 2015 (MC +0.8 percent). Petrobas is not only Brazil’s but Latin America’s largest company hinting at the key challenge of widespread corruption, but also Brazil’s main strength of vast natural resources. The inclusion of three Brazilian banks among the wealthiest companies in the world signals growing financial capabilities with the potential to evolve into a regional financial hub. Positive yet without the same trajectory of growth remains the inclusion of two top rated universities on the QS ranking since 2005. While only the Universidade de Sao Paulo was among the elite in 2005, the entry of Unicamp, the Universidade Estadual de Campinas, marks a positive development in the category of top-rated universities. Nevertheless, Brazil’s tertiary education remains  weak by international standards hampering the expansion of structural power that pushes business and the society as a whole to higher levels.[4]

Considering the third dimension of innovation in the BPSM, the number of Brazilian publications has more than doubled during the review period. This translates into the greatest expansion of global shares in the country’s profile (MC +0.84 percent). While Brazilian researchers produced not even 22,000 scientific publications in 2005, they raised their output to 53,492 publications in 2015 as counted by the National Science Foundation. Mexico and Argentina for example published only around 14,000 and 8,700 articles respectively.

The positive development in all three categories of innovation and strategic hubs underlines the effectiveness of reforms and transfer programs. The Bolsa Escola program which was followed by the Bolsa Família program marked significant progress in the support of poor families facilitating school education and financial support for millions of Brazilians. Furthermore, the 2011 Plano Brasil Maior shows the growing awareness among the political elite of innovative weaknesses in the global knowledge economy.[5] The National Strategy for Science, Technology and Innovation 2016-2019 further intensified government spending on research and development supplemented with  greater efforts to reduce social and regional inequalities in the strive for sustainable development.[6] It seems that Brazil has recognized the necessity to overcome structural and social demands to ensure its national motto “Ordem E Progresso” (“Order and Progress”). 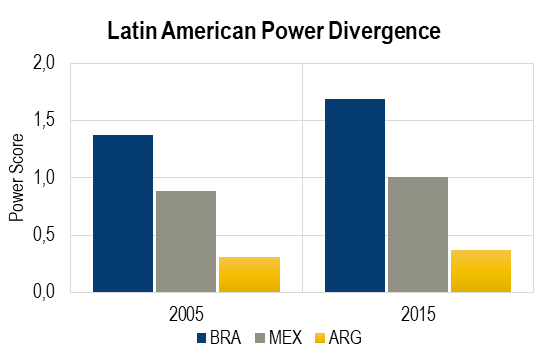 Brazil’s interest in developing hard power capacities is often considered as diminished in contrast to other rising powers.[7] The BPSM reveals that this assessment is not valid anymore. With a size of almost 730,000 personnel, Brazil commands the fifth largest armed force among the individual G20 states. It even enlarged its forces by more than 50,000 in 2006 (FORCE: MC +0.3; ICR +8.4). Additionally, Brazil has raised its military spending by more than +40 percent in the period of observation to around $24.6 billion by 2015 (MC +0.2 percent). This is more than three times of Mexico’s defense budget underlining Brazil’s interest in modernizing its military. Even though Brazil traditionally rejects military means as a foreign policy instrument, the observed shifts underline that stakeholders gradually embrace the idea of hard power as a complement and signal to Brazil’s power status.[8] While more than two thirds of the defense budget are consumed by salaries and benefits, this increase seems yet less a sign of robust military buildup than of needed investments.[9]

The overall picture illustrates that Brazil’s has enlarged its lead as a regional power in particular in the G20 forum. Neither Mexico nor Argentina can keep up with Brazil’s steady rise which is, however, much more gradual than that of India or China. Referring to the BRICS-forum, Brazil is only more powerful by BPSM measures than South Africa (PS 0.37) in 2015. While Russia is still more powerful (PS 2.41), Brazil boasts higher growth rates in both relative and absolute terms over the review period corroborating its reputation as a major emerging power despite volatile figures. This impression is reinforced by Brazil’s increased willingness to act as a power broker and moderator.[10]

Nevertheless, the country has to manage great challenges: Financial instability, high corruption, and social inequalities have already found expression in mass protests. Social unrest and mismanagement during the 2014 FIFA World Cup have stuck in the memories of the world leading to lower international reputation, hence decreased soft power.[11] Furthermore, its most recent suspension from membership of the Union of South American Nations limits the impression of Brazil as a regional rule-maker. Certainly Brazil has made its way to the global top, but if it aims to sustain its rise and reputation, it needs to live up to its own claim of leadership.