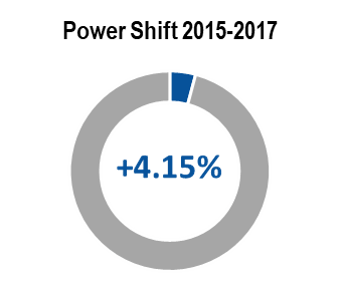 In a global view, Australia is one of the biggest power losers from 2005 to 2017. In total, it has lost 22 percent of its Power Score over the years. Having said that, Down Under presents a positive change for the recent 2015/17 period increasing its Power Score by 4.2 percent up from 1.60 to 1.66. Its power development yet seems irregular overall and its current rating still lags far behind its 2005 Power Score of 2.13.

Australia’s positive score is based on relative and absolute increases in four out of the eight BPSM categories – merchandise exports, service exports, military expenditures, and top universities. In two categories, GDP (PPP) and armed forces, the country records absolute increases which do not translate, however, into relative changes as they roughly correspond to the global average change rate. In the categories of scientific publications and top companies, Australia presents both absolute and relative losses, but these are the only two negative categories among the eight under review and did not outweigh the gains. Turning to that, it increased its merchandise exports by more than 23 percent since 2015, which is a remarkable development as the export rate had been dropping in absolute and relative terms since 2011. Even though exports have not yet returned to the 2011 level, the upswing indicates a possible power plus for the country. Nevertheless, Australia lags around 60 billion USD behind the export volume of the next higher-ranking India. 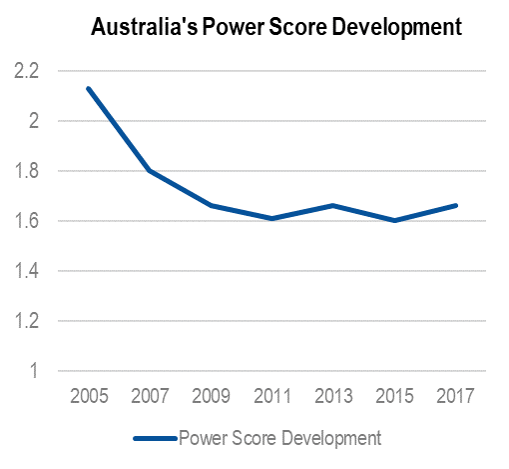 Taking a closer look at the plus in its top-rated universities, Australia lists nine of them among the leading top 200 in the QS world ranking. This number, however, has only grown by one since 2015 and is still disappointing compared to the 17 listed leading universities in 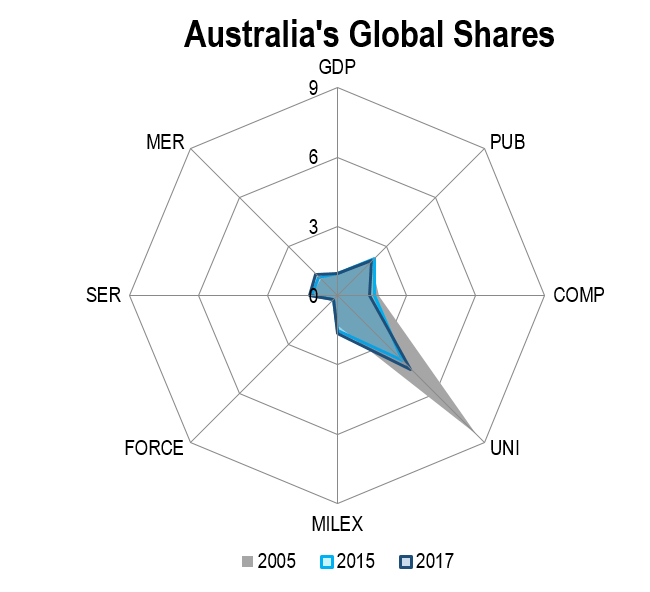 2005. On the negative side, the gravest factor are top companies, although Australia has also lost only one among the Fortune 500. While the number of only seven Fortune 500 companies is the lowest ever recorded number by the BPSM, the irregular development of these numbers in the past still leaves room for hope.

Overall, Australia performs quite well in the 2015/17 period, although changes are not spectacular. From 2016 to 2017, it even suffered an incremental decrease in country power. The country struggles to retain its Power Score: Starting from 11th place in 2005 among the G20 member states, South Korea already overtook this position in 2006. Next lower-ranked Brazil overtook Australia in 2010. Although it managed to regain its starting point in 2016, Australia was again surpassed by the South American riser in 2017. The two G20 countries are very different in their internal structures but show similar difficulties in maintaining or increasing their level of power. This power race remains hence an interesting issue for our future ranking.

A Pivotal Power between Distance and Proximity

For a long time, Australia was challenged by the ‘Tyranny of Distance’ to the dominant states of the West, but with Asia rising, it finds itself in the very proximity of power. This new geostrategic location provides Down Under with great opportunities but also formidable tasks as its global weight is reduced by the sheer mass of its neighbors. This is also visible in Australia’s 2005-2015 performance as it has lost more than one fourth of its relative strength over this period. With a power loss of 0.55 (PSR), Australia is among the power losers of the G20 and slumps from rank 11 to rank 13 rating the Power Scores of the 19 states. In country specific terms, Australia has performed better than most of the established powers in the G20 like Canada, the UK, Germany, Italy, France, Japan or the United States. The adverse trends underscore the country’s richness and resilience but also hint at the challenges of globalisation and rising neighbors. 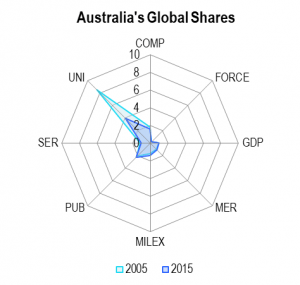 The BPSM spots Australia’s special resilience in times of global power shifts in economic terms. While other industrialized powers like Canada or France have lost significant shares on global GDP, Australia largely maintained its weight (GDP: MC -0.05; ICR +66.33). Even though it is the smallest country by population size in the G20, it does not lag behind in terms of wealth and growth. In absolute terms, Australia has the third lowest GDP (PPP) among the 19 states, only ahead of Argentina and South Africa. In contrast to this, its GDP per capita is among the highest in the world which is largely owed to its abundant natural resources.[1] 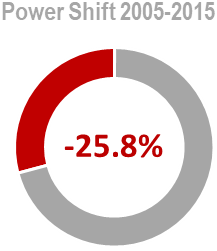 While its natural reserves are a keydeterminant of wealth, they are also an Achilles’ heel: Despite continuously rising export volumes, falling commodity prices have contributed to lower export revenues particularly since 2014 and are only expected to rise after our 2015-review period. Australia still shows a positive shift in merchandise exports (MER: MC +0.13; ICR +76.92). The other side of the coin is that Australia enjoys the profitable position as a popular trading partner. China’s rising demand for primary source material has fueled Australian growth and elevated China to Australia’s primary export destination. While the Asian countries have become Australia’s primary trading partners, it still holds strong ties to the West, particularly to the United States.[2] Although Australia’s economy remains behind the mass of its neighbors, its strategic advantages enable the country to perform as an active facilitator of international organizations and free trade agreements thus giving significant structural power to the Land Down Under.[3]

Australia has not only abundant raw materials at its disposal, but also high-skilled citizens contributing to its resilience in a globalized world.[4] While Australia repeatedly performs well on skill and research assessments, the BPSM reveals quite a mixed picture of Australia’s scientific as well as competitiveness. First, it has lost in both categories of innovation hubs. It has forfeited a place on the Fortune 500 ranking, but still lists eight leading firms in 2015.

Yet the country’s losses in the top universities category are even more serious as Australia lost more than half of its globally leading academies among the top 200. While it was home to 17 of them in 2005, it only hosted 8 top-rated universities in 2015 (UNI: MC -4.5; ICR -52.84). Therefore, Australia’s negative power shift rating is largely owed to its loss of internationally renowned academies. The country is reputed for having one of the world’s best educational systems, providing it with special soft power serving as a role model in the Asia Pacific. While Australia still hosts many high-quality universities, its severe loss among the top 200 elite reveals that the country struggles with maintaining its educational leadership. In contrast to this, rising relative as well as absolute numbers in scientific publications stress the population’s capabilities (PUB: MC +0.17; ICR +68.05). With a total of 52.000 articles, Australia is ranked on the lower ranks (13/19) among the states reviewed, yet in relative terms, it has one of the highest research outputs per capita. The administration has already recognized these ambivalent trends and introduced a whole-of-government strategy for science, research and innovation in 2014 and 2015. Particularly the National Innovation and Science Agenda (NISA) created in December 2015 aims to build a stronger, more productive and diverse economy integrating research and entrepreneurship, as well as facilitating international collaboration.[5]

This could also provide new headwind for Australia’ service exports sector which hangs behind the global pace, though it is still growing (SER: MC -0.14; ICR +60.74). In absolute terms, Australia is the twelfth largest service exporter among the individual G20 states – signaling its middle power status. Taking a closer look, the country is struggling hard with keeping this status. In the service exports category, it was already overtaken by Russia in 2006. Referring to the common distinction between traditional and emerging middle powers, South Korea has already been ahead of Australia in all but one – the universities – BPSM categories in 2005. Again, this corroborates the solid reputation of the Australian education system. Yet the grave losses in this particular category as well as its general minor rating compared to South Korea indicate an erosion of Australia’s middle power status. This is further underscored by comparing Down Under to another traditional middle power: Canada holds more shares than Australia in seven out of the eight BPSM indicators in 2015 and shares the same number of universities, although the Northern American states has also suffered from declining global weight.

Over the decade of observation, Australia has actively enhanced its hard power capacities. Its military budget was raised from $16 billion in 2005 to $24 billion in 2015 (MILEX: MC +0.2; ICR +42.30). Its armed troops have also been enlarged from 53,000 force personnel in 2005 to 57,800 in 2015 – yet staying the smallest troop of the individual G20 states. Australia thus increased both its investment as well as manpower and reaffirmed in its latest White Paper of 2016 to continue a qualitative and quantitative buildup.[6] As self-reliance constitutes Australia’s fundamental defense principle, the upward trend does not come surprisingly, even though Australia already enjoys the natural structural advantage of its geographic location distant from any enemies.[7] Yet its latest White Paper emphasizes the perceived need to prepare for regional and global risks such as terrorism and territorial disputes.[8] On the other hand, its military strengthening is regularly regarded as a sign of balancing against Asian risers offering a starting point for analysis about party rifts on orientation in foreign affairs and its impact on power capacities.

Australia has seen great changes in the 2000s. Over the 2005 to 2015 review period alone, the country has seen five Prime Ministers come and go, prompting warnings about increasingly dysfunctional politics. The country’s vast primary resources, its highly-qualified citizens and unique geography have worked in favor of Australia’s international power enabling it to foster cooperation as a pivotal middle power in the past. 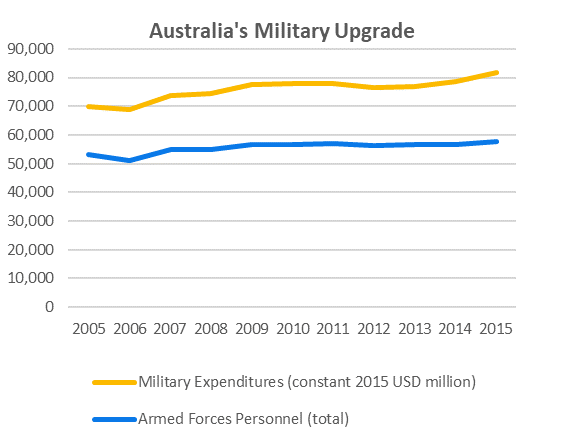 Recognizing the Asian shifts, Australia has turned to voice the interests of rising powers, particularly those in its Indo-Pacific neighborhood, in multilateral institutions. Being a voice for new risers without neglecting traditional allies as the United States qualifies Australia as a strategic key partner for both the West and East and exemplifies its exceptional pool of soft and structural power. The loss of more than one quarter of its 2005-power base in the BPSM measure indicates that Australia has not kept up with the dynamic of its growing powerhouse neighbors which questions the sustainability of its voicing role. Australia has thus profited from its unique geostrategic location, but that did not protect the middle power from the general trend of power decline of the established powers in the face of novel risers.