While Russia achieved significant international power gains during the decade of 2005/15, Mos-cow experienced relative losses compared to G20 countries for the latest period of 2015/17, with a Power Shift Rate of -0.06 percent. In comparison, Russia has thus lost 2.41 percent of its power since 2015. However, it must be kept in mind that the Russian Federation was already among the power losers in the phase of 2013/15 and that the absolute power development of the biggest country on earth has turned positive again, with a Country Change Rate of 2.76 percent, compared to -3.27 percent in the period be-fore. Additionally, Russia was able to defend rank nine on our Power Score Ranking.
A closer look at the categories observed reveals that Russia´s absolute gains are 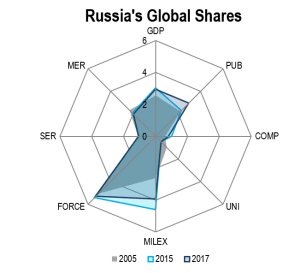 mainly due to a boost of its economy, with the GDP and both service and merchandise exports showing strong absolute growth compared to the previous phase. Especially the exports made great leaps, considering that they were decreasing massively during 2013/15. However, those absolute economic gains only translated into relative increases in the category of service exports, with a slightly positive Market Change of 0.03 per-cent. The profits in this regard are not enough to balance losses in other categories because the further economic developments generally lag the global average. Moreover, Russia has also lost one company on the Fortune 500 list.
The military categories, on the other hand, show the opposite development. While Russia achieved relative as well as absolute gains in both military spending and the number of armed forces during 2013/15, it is now losing power in these categories, both absolutely and relatively, and substantially so in the case of military spending. Bearing in mind that Russia traditionally puts a focus on its hard power position and considering that it is the very first time in the data of the Bonn Power Shift Monitor that Mos-cow decreases its military spending, this development is surprising, even though there has been strong variation in the number of armed forces before. 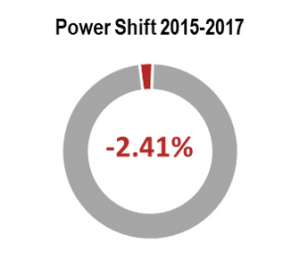 As for Russia´s power in science, we can see a twofold development: while the number of top universities is stagnating at only one, the amount of scientific publications continues to increase substantially and so do the country shares in this category.
In sum, Russia´s general loss in international power is not too surprising. Moscow showed a quite volatile power development for most of the observation time span of the BPSM. Moreover, its economic recovery must be regarded in the context of a very weak performance during 2013/15, making it easier for Russia to achieve absolute gains here. Nevertheless, the cuts in the military categories, especially in military spending, are remarkable and contribute strongly to its relative power loss.

With Italy right behind Russia in our power ranking, receiving 0.43 Power Score points less than Moscow in 2017, the world´s largest country does not have to fear losing its position soon. If Russia wants to successfully follow its regional and international aspirations, though, it must show a stronger and more sustainable performance. 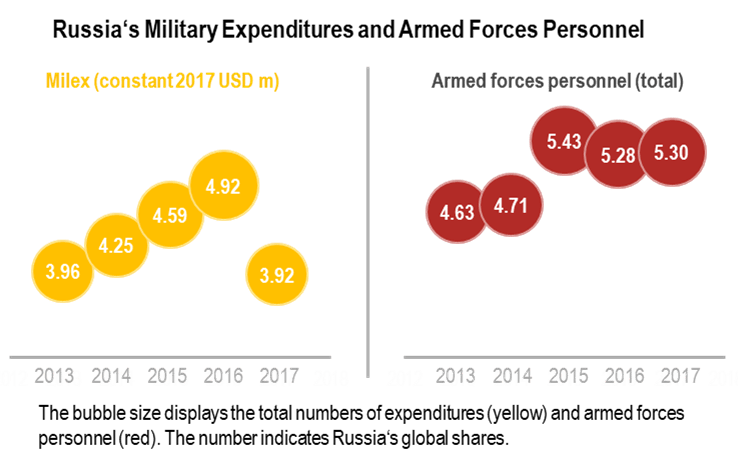 Falling Behind its Global Aspirations 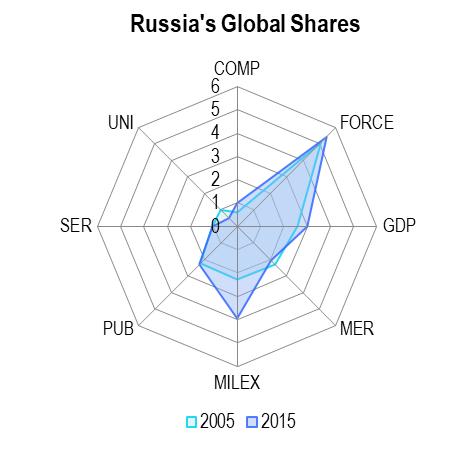 As the biggest country by territory in the world and remembering its former superpower status, the Russian Federation set its own aspirations high – not to say global. Based on a period of remarkably high growth in the 2000s, Russia is currently lagging behind its ambitions due to economic hardship and diplomatic tensions. Nevertheless, its overall 2005 to 2015 outlook  remains positive, ranking Russia among the BPSM power gainers in place six with a Power Shift Rate of +0.27. In other words, Russia has increased its power base by 12.5 percent. As  illustrated in the chart on the right, the power gains are largely owed to increasing military expenditures, whereas negative rates for universities, merchandise and service exports curb Moscow’s power expansion. With a Power Score of 2.41 in 2015, it is the ninth strongest nation of the G20 member states. Taking a closer look, however, its development takes quite a  discontinuous path with volatile Power Scores.

Over the period of observation, Russia increased its hard power in numbers and also proved a willingness to project this power in foreign affairs. The conflicts in Georgia, Ukraine and Syria stress Russian abilities to project its military might abroad. The already initiated modernization and build-up process was reinforced by the launch of military reform in 2008 after the Georgian war.[1] The build-up trend is articularly visible in Russia’s military expenditures which more than doubled in the period of observation. This enlargement is in fact the strongest plus for Russia’s 2005-2015 power shift rating, hinting at a special focus on hard power buildup. With a $66.4 billion budget in 2015, Moscow is the fourth greatest defense spender in the world after the United States, China and Saudi Arabia. In absolute figures, however, this makes up only one fourth of the Chinese and slightly more than one ninths of the US’ volume of spending.Even though Russia’s economy is groaning under recession, the upward trend in spending is a political project and remained untouched until 2017.

There is also an upward trend in armed forces with Russia commanding the third largest troop on the list after China and India and 143,000 more forces personnel than the United States. Increasing its troop size to 1.49 million in 2015, Moscow gained hard power in relative and absolute terms. Yet until 2014, the priority was to modernize instead of enlarge the force which was reconsidered due to its foreign deployment. Both the enlargement and increased spending are reflected in the Russian 2014 Military Doctrine. The paper aims to improve the military infrastructure, strengthen the force, enhance combat readiness and upgrade equipment. Thus the Kremlin targets a holistic strengthening of military capacities in qualitative as well as quantitative respects that further bolsters its hard power assertiveness. Then again, the political elite had to manage harsh cutbacks due to economic hardship that ultimately required them to succumb to some austerity.[2]

In the economic sense, the Russian hard power presents a mixed picture as the 2015-figures already suffer from recession. In the three macroeconomic categories considered by the Monitor, Russia gained only in the GDP category, but with a harsh decline to the 2014-level (GDP: MC +0.43; ICR +104.53). The continental power has clearly experienced a strong growth from 2000 to 2008 and from 2009 to 2014. The observed setbacks can be related to e.g. falling oil prices and foreign sanctions. Particularly, the former factor can also be observed in countries such as Saudi Arabia, whose merchandise trade is similarly reliant on oil exports and presents analogical gains and declines over the review period.

This is also visible in the comparably small number of globally leading companies. While their number rose from three in 2005 to eight in 2014, Russia again lost three entries presenting only five companies among the global 500-elite. In view of its original great power status, this weak figure places Russia between Mexico and India and renders it incomparable to the first ranked United States, boasting 128 entries on the list of globally leading companies. In addition to reverted privatization, property rights violations are said to hinder the Russian business sector from flourishing. Asset-grabbing or corporate raiding is so widespread that the Russians even have a word for it: Reiderstvo. It describes illicit acquisition practices e.g. by law enforcement officers and courts.[3] The Russian inertia to address business reform is consequently undermining its power in all – soft, hard and structural – dimensions placing it far behind other traditional powers.

For service exports, the Kremlin’s international importance is even smaller than for commodity trade. Export rates increased from $28.8 billion in 2005 to $51.7 billion in 2015. The volume peaked in 2013 and shows a similar downward curve as the merchandise exports related to similar reasons. With this, the Russian share almost stagnated at one percent of the global volume, whereas its merchandise makes up twice as much with two percent of the global trade. With this, Russia is placed mid-table of the G20 in both categories. The mismatch between the Russian potential and the economic numbers is even more striking for service trade than for commodities as service exports reflect to some degree the link between human skills and international competitiveness. Despite its well educated citizenship, Russia was not even ranked among the top 20 for total service exports by the estimate of the World Trade Organization (WTO) in 2015. This is a great lack in power realization and means a failure to meet the global market standards in skill-intensive industries.[4]

Contrarily, Russia has the structural advantage of a well-educated citizenship: 53 percent enjoyed tertiary qualification – a level far above any OECD country.[5] Yet, the country hosted only one internationally renowned university in 2015: the Moscow State University, whereas it started off the research period with two entries. Still, Russia is not alone with this poor number in the G20 as also Argentina, Italy, Mexico, Saudi Arabia and South Africa present only one top 200 university in the QS 2015-ranking. Though Russian researchers published 60 percent more articles in 2015 than in 2005 (MC +0.07 percent), their output was still well below the OECD average[6] and only twelfth among the G20 states. This indicates that Russia’s knowledge society is at risk to fall behind the accelerated tempo of education around the globe. Even riser Brazil has managed to surpass the Russian scientific output in 2007 and stayed in front of Moscow until the end of the research period. With strongly increasing publications since, Russia has almost reached the Brazilian level and underscores its untapped scientific assets. The administration has indeed recognized the need for reform and tries to revitalize the scientific sector by adopting new performance measures and several roadmaps for research, including a 2013-2020 Mega-Science Infrastructure Projects program.[7]

Putin has promised to restore Russia’s due credit in the global system. Moscow’s present Power Score is largely based on ambitious hard power (military) buildup. When the boom dynamic of the 2000s dried up, politics and society were  confronted with the consequences of delayed reform and dependence on global resource markets. Russia’s assertiveness is expressed by regional thrusts in military as well as economic regards, e.g. in Ukraine or the Eurasian Economic Union (EEU). Crumbling state revenues due to sanctions and recession constrain further advances. Reorienting towards the unexploited potential of its high-educated population and managing domestic barriers to development offers opportunities for renovation and upgrading its global position. Though Russia has managed to surpass Canada’s level of power over the period of observation, the Bonn Power Shift Monitor records no extraordinary upsurge as is the case for South Korea. Thus Russia’s resurgence has overall stayed behind its own global aspirations over the period of observation.